Coors Is Sharing Stories — and Its Secret Pilsner, Barmen — for the Holidays The Golden Trinity twelve-pack features Barmen, Batch 19 and Coors Banquet. Coors/AC Golden Brewing
For nearly 25 years, Coors has been brewing a beer that most people have never even heard of, let alone tasted. Based on the traditional pilsners of Germany and named for the town where Adolph Herman Joseph Coors was born in 1847, Barmen has always been made in small batches and sold to just a handful of accounts.

Not only that, but for most of that time, Coors required those bars and restaurants (fewer than twenty at one point) to serve the beer in a tall pilsner glass and to pour it slowly — a technique sometimes referred to as "the seven-minute pour" — and with a thick, foamy head, in the traditional manner.

That will change next week, however, when Barmen is canned and shared with the rest of Colorado for the first time as part of a special holiday twelve-pack that also features two other history-laden beers — Coors Banquet and Batch 19. All three lagers are special to the Coors family and have only ever been brewed in Colorado.

"It's a beer that we’ve been very in love with here at the brewery," says Jeff Cornell, the general manager for AC Golden, Coors's small-batch pilot brewery. "And so have the people who know about it and have followed it for years, even decades. So we were thinking, what could we do for the holidays that would be special this year?" 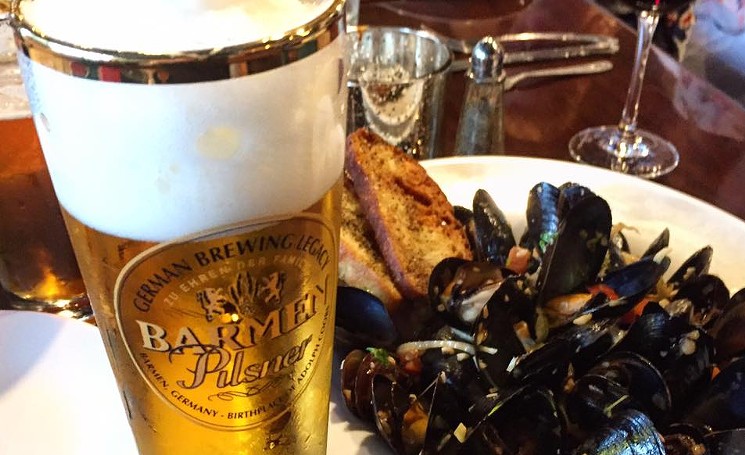 Barmen is always served in a special glass on draft.
Visit Golden Facebook page
Barmen was developed in 1997, after then-CEO Pete Coors, the great-grandson of Adolph, took a trip to its namesake town to learn more about his family history. At first the beer was served only to employees inside the Coors plant in Golden, but it later made its way out to a few bars and restaurants in Golden and Denver that promised to take special care with it. They include the Table Mountain Grill, My Brother's Bar, the Rock Rest Lodge and the North Side Tavern. It can now be found at about 25 establishments.

So the biggest concern in canning Barmen and selling it on a wider scale was how to preserve its meaning to the Coors family and the special way in which it is supposed to be poured and enjoyed.

Pete's son David Coors, who now runs the Golden-based division that oversees AC Golden, says the issue involved some discussion. "I have received a lot of questions around the seven-minute pour, and I was reminded that Uncle Bill [Coors] always said 'there are no sacred cows' and to have such a great beer that is not more readily available is a shame," David writes in an email to Westword. As a result, Coors "developed a team that tested how this beer could live in a packaged format, and through extensive testing, we felt we could give fans the seven-minute pour experience via a can...if they can manage their patience accordingly.”

As a result, Cornell adds that the graphics on the can dedicate one side to the pouring ritual and proper glassware. The Barmen label includes instructions for the proper pour.
Alcohol and Tobacco Tax and Trade Bureau
The Coors family faced a major disappointment last fall when the CEO of Coors's corporate parent, Molson Coors Beverage Company, announced that it would close its longtime Denver offices — affecting more than 300 employees — and move its headquarters to Chicago. At the same time, perhaps as a sort of consolation prize, the company said it planned to invest hundreds of millions of dollars into upgrading Coors's massive Golden brewery, which is still located near the site of its 1873 founding.

Last week, Coors revealed the specifics of that plan: Known as G150 — as a nod to the brewery's upcoming 150th anniversary in 2022 — the project will update, overhaul or replace the sprawling buildings, equipment and infrastructure that Coors uses to filter, ferment, store and package its beer. Peter J. Coors, Pete's other son, will oversee the project; he has had several high-level positions within the company.

It's no surprise, then, that the family also wants to focus on its heritage. That began earlier this year when AC Golden (which operates deep within the Coors plant in Golden) began brewing Batch 19 for distribution in cans in Colorado. That beer, which is richer and more full-flavored than some of the brewery's other lagers, also has an interesting story. First brewed more than 100 years ago, it was a favorite of Coors employees (similar to Barmen today) in the early 1900s. But like every other beer, it was shelved during Prohibition. Coors Brewing was founded in Golden in 1873.
Coors Brewing
Fast-forward to 2004, when some of the brewery’s archives had to be moved after a small flood in the basement and the recipe was rediscovered in an old logbook. Coors decided to see if its aura could be recaptured, and began tinkering. In 2010, Coors released the results, naming the beer for the year that Prohibition was ratified nationwide. After several stops and starts, it is now available again in redesigned packaging.

“As we expand the AC Golden portfolio, one area we are embracing is the business's namesake — Adolph Coors. Batch 19 was one of the first beers we launched with this strategy, and Barmen seemed like a great next step," David Coors explains. The third beer in the twelve-pack, which is called the Golden Trilogy Pack and highlights the word "Golden" in large letters, is, of course, Coors Banquet. Brewed only in Colorado, this yellow can needs no introduction as it is the descendent of the brewery's very first brew from 1873.

"2020 has dealt us a lot of interesting cards," says AC Golden spokeswoman Meagan Nelson. "So with the holiday season looking more and more non-traditional... we wanted to give people something to get excited about." And with bars and restaurants in a somewhat tenuous state because of the coronavirus restrictions and social-distancing rules, it made sense to put Barmen in a can so people can enjoy it at home or take it with them to "an appropriately-sized social gathering," she adds with a laugh.

The Golden Trilogy Pack will only be available in Colorado, and only through the end of the year.
KEEP WESTWORD FREE... Since we started Westword, it has been defined as the free, independent voice of Denver, and we'd like to keep it that way. With local media under siege, it's more important than ever for us to rally support behind funding our local journalism. You can help by participating in our "I Support" program, allowing us to keep offering readers access to our incisive coverage of local news, food and culture with no paywalls.
Make a one-time donation today for as little as $1.