The new refill shop is located next to City, O' City and Make, Believe Bakery. Dave Rouse
A last-minute decision to fill in for a dishwasher who'd walked out of Watercourse Foods is how David Rouse and Dan Landes came to be friends and later business partners. "I was a preschool teacher at the time," Rouse explains, "but it was a weekend." So even though he didn't really want to, he took the shift — and ended up connecting with Landes over their mutual interest in vegan and vegetarian eating.

Landes, a Denver native, opened Watercourse in 1998; at the time, it was one of the only vegetarian restaurants around. Rouse had gone vegan by the time he was sixteen, so he was drawn to the restaurant and was already a regular when a roommate who was a waiter there called and asked him if he wanted to step into the dish pit.

"[Dan and I] became friends, and we talked business ideas over the years on and off," Rouse explains. "But I decided to travel."

After spending years exploring the world, Rouse ended up back in a familiar place: washing dishes at Watercourse, which had moved to its current location at 837 East 17th Avenue. After deciding he wanted to pursue the idea of opening an all-inclusive hostel, Rouse ran into one major issue: "I didn't even really know how to cook...so I just kind of busted my ass [as a dishwasher] and worked my way up to line cook, and Dan and I were able to spend time talking together about ideas."


By that point, Landes had also opened the vegan bakeshop Make, Believe Bakery (which was added in 2004) and restaurant City, O' City, which debuted in 2008. Dan Landes (left) and Dave Rouse share a passion for sustainability.
Dave Rouse
In 2009, the two officially went into business together when they founded a hostel called Osa Mariposa in Puerto Escondido, Mexico. Its restaurant specializes in vegetarian fare, and Rouse took the lead on the design and getting the place up and running. "We had a great flow, a great working relationship together," Rouse notes. "We came up with a lot of good ideas with the help of fresh coconuts and a little bit of mezcal."

Mezcal was, in fact, supposed to be the pair's next project. Rouse wanted to open a mezcal bar in the space next door to City, O' City and Make, Believe Bakery, "but in a strange turn of events, I fell in love with an old friend," Rouse explains, which sent him on a detour to San Diego.


At around the same time, in 2015, Landes sold Watercourse to Lauren Roberts, then the general manager at City, O’ City, and her mother, Jennifer Byers. By that point, the pioneering vegetarian restaurant had gone fully vegan. He also leased the space that Rouse had been interested in at 220 East 13th Avenue to Queen City General Store.


Then, in 2016, Landes and some business partners purchased the Campus Lounge, giving the longtime Bonnie Brae favorite a facelift and new (non-vegan) menu, which ultimately didn't win over fans in the neighborhood. It closed on March 25, 2018, just five months after Landes and his team had reopened the location following a long renovation process. At the time, Landes admitted, "Failure is not fun."

In April that year, he sold his two remaining businesses in Denver to Roberts and Byers, and announced that he was moving to Mexico, writing a letter about old Denver, new Denver and his plans to leave the city in an article for Westword.

"That was sort of my goodbye," Landes explains. "It wasn't a 'Fuck you, Denver' letter at all. There was a lot of desire for introspection and time and space from the intensity of what I had been involved with for twenty years ... By the time I left, I was ready to just heal and reanalyze my life and begin to slow down a bit."

Landes and Rouse essentially switched places, with Landes moving to Oaxaca to work on updating Osa Mariposa for the modern traveler and Rouse returning to Denver to start a family with his wife (that jaunt to San Diego for love had worked out).

In 2020, as Queen City General Store's lease was coming to an end (it opted not to re-sign, then moved to a new location behind Denver Central Market and rebranded as Recital), Landes reached out to Rouse to reignite the conversation about a business idea for the location. "I said, 'Yes, great, wonderful," Rouse remembers. "But I don't really want to do a bar right now. My life has changed a lot in the last five years." Instead, Rouse wanted to focus on opening something with a positive impact for the community, which was more in line with the interest in sustainability that he and Landes shared.

"When we were in Puerto Escondido, we started using a refill shop," Landes explains. "So we would refill our olive oil and soy sauce and our conditioner and shampoo and so many different products." 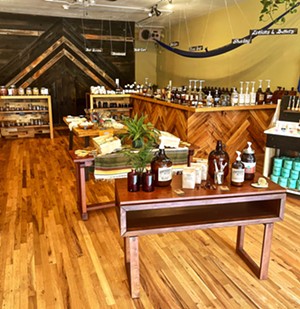 Much of the interior design uses reclaimed materials.
Kelsey Borgarding
Rouse was on board, too, and Off the Bottle Refill Shop opened on June 12 at the corner of 13th and Sherman. As at Osa Mariposa, Rouse took on the task of designing the space, focusing on using reclaimed materials.

Off the Bottle currently offers a selection of personal care and cleaning products ranging from low-waste cosmetics and deodorants to laundry detergent and dish soap, all with a focus on vetting the best natural, biodegradable and local options. Customers can bring in any jar or bottle to be refilled with the many items available. Off the Bottle also sells new glass bottles and has a recycling program in which anyone can donate old mason jars or other glass containers that are then sterilized and available for free.

The selection at the store will continue to expand; Rouse hopes that it will one day include food items. "I already have drawings and plans for how we're going to operate when we get to that point," he says, but bringing in food requires a different license. For now, Rouse is focused on providing refillable items that are not typically available at other locations, such as grocery stores.

At the moment, Landes has no plans to return to Denver permanently, though he did make a recent stop in the Mile High. "Right now I'm on a cross-country road trip with my family," he says. "I was able to get dinner with Danny [Newman] at the Mercury Cafe about ten days after he bought it." Newman and partners purchased that Denver institution from founder Marilyn Megenity earlier this summer, with a promise to stay true to its community-focused vibe.

"I was like, 'Thank God it's not me,'" Landes says of taking on the task of continuing the Merc's legacy. "I think Danny is the right person for the job, because I think his intentions and his heart are in the right place."

Next stop on the road trip is New York, and then Landes and his family will be heading back to Oaxaca, where son Charley is running the resort.

But Denver will always be important to Landes, no matter where he is in the world physically. "I'm really glad to be participating in Denver's economy," he notes, "and being able to express the love I have for the city through creating new spaces that are good and positive."
KEEP WESTWORD FREE... Since we started Westword, it has been defined as the free, independent voice of Denver, and we'd like to keep it that way. With local media under siege, it's more important than ever for us to rally support behind funding our local journalism. You can help by participating in our "I Support" program, allowing us to keep offering readers access to our incisive coverage of local news, food and culture with no paywalls.
Make a one-time donation today for as little as $1.