Berkeley Alley Beer Company
For the past eight years, De Steeg Brewing's biggest weakness has also been its strength. Located just off the busy corner of Tennyson Street and 44th Avenue, the tiny beer maker faces the alley. That fact makes it a hard-to-find spot for those who don't know about it — and a hidden treasure for those who do.

The brewery's new owners, Matt Kirchhevel and Ty Kain, know that as well, which is why they're doubling down on that back-alley cachet with a new name, Berkeley Alley Beer Company, and a new logo.

"We fell in love with the Berkeley neighborhood and the uniqueness of a brewery in the alley. It was the perfect size, with a great staff and an amazing brewer," says Kirchhevel. "After multiple owners...changing the name will give us a fresh start and [allow us to] make it our own."

"Being in the alley has its challenges, but it's also a little quieter, which I think is nice. We're quaint and small, but we're unique...and we have signs out on the street that tell people how to find us," Kain adds. 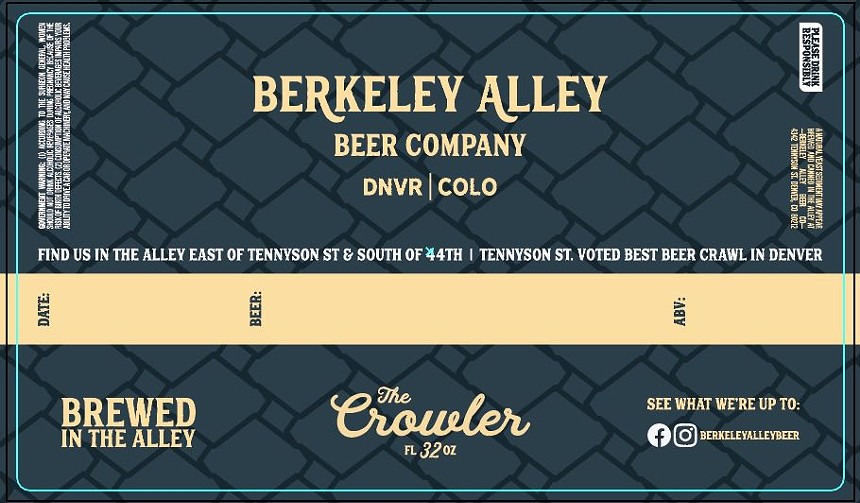 Berkeley Alley Beer Company
They have also changed the longtime nano-brewery's focus from Belgian styles to more sessionable beers (meaning they're lower in alcohol than many of De Steeg's offerings), along with hazy IPAs and pale ales, though they're keeping a few favorites from the De Steeg days, including a Belgian quadrupel and a French saison, both of which will be canned this fall and winter. Head brewer Jerry Hopkins will stay on.

"We still have a few of the legacy beers on tap. A lot of regulars really enjoy those, but our focus now is on beers that you can have three or four of and then walk home," Kain says. "We want everyone to feel comfortable ordering a beer, so we want to have a beer for everyone."

The two bought the brewery from its previous owner, Ken Klispie, in April but have been waiting to make any changes until they could get a better feel for what customers wanted to drink. They hung up their new sign the morning of October 1, and the name on the website and social media accounts will be updated as well.

They're also hoping to upgrade some the brewery's equipment in the next year or two since the brewhouse currently consists of a tiny 1.25-barrel brewing system. 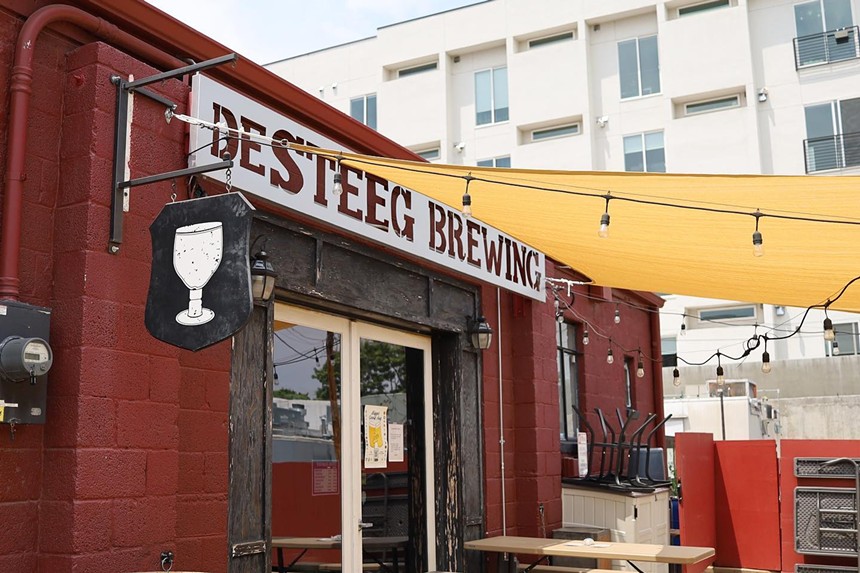 The De Steeg sign will replaced by one for Berkeley Alley.
De Steeg Brewing
Kirchhevel and Kain have known each other for thirty years — Kirchhevel's wife is Kain's cousin — but they got serious about owning a brewery last year when, Kirchhevel says, he got "burned out" with his career in corporate IT during the pandemic and decided to turn a longtime dream into reality. Kain, meanwhile, is known to many local beer drinkers as the owner of Crafted Tees Custom Apparel, which makes branded T-shirts and hats for 25-plus Colorado breweries, including WeldWerks, Woods Boss Brewing, Cabin Creek Brewing, Downhill Brewing and New Terrain Brewing.

The brewery was founded in 2013 by Craig Rothgery, who called it De Steeg because that means "the alley" in Dutch, and Rothgery was a fan of Belgian-style beers. At the time, the small space — it only has room inside for about 35 people — didn't even have a sign outside, just a painted logo.

In 2017, Rothgery sold to friends Ken Klispie and Tom Martinez, who planned to ramp up production and add a second brand called Blind Faith Brewing. Martinez eventually left to open Blind Faith in the former Saint Patrick's Brewing building in Littleton in 2019; that brewery closed just one year later.
KEEP WESTWORD FREE... Since we started Westword, it has been defined as the free, independent voice of Denver, and we'd like to keep it that way. With local media under siege, it's more important than ever for us to rally support behind funding our local journalism. You can help by participating in our "I Support" program, allowing us to keep offering readers access to our incisive coverage of local news, food and culture with no paywalls.
Make a one-time donation today for as little as $1.