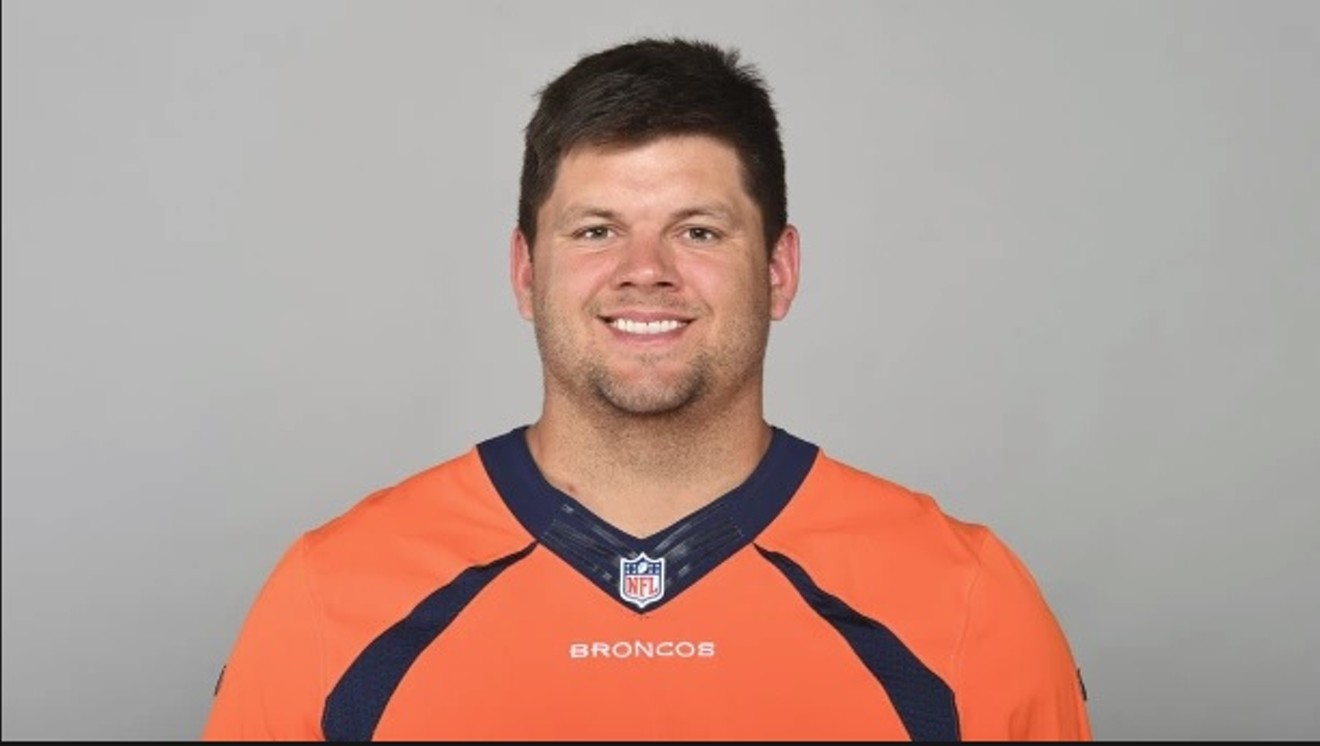 Jared Veldheer is probably a better brewer than you. Denver Broncos
The Denver Broncos season opener is only two days away, and offensive lineman Jared Veldheer has a lot on his mind. How will his ankle hold up in his ninth season in the NFL? How will the Seattle Seahawks defenders try to come at him this Sunday? Will he be able to protect new quarterback Case Keenum? Oh, and what Denver craft brewery should he hit next week when practice is over?

Veldheer, who joined the Broncos last spring after nine years with the Arizona Cardinals and the Oakland Raiders, is a bit of a beer nerd — well, maybe more than a bit — and an award-winning home-brewer. A few weeks ago, Great Divide Brewing cooked up one of his recipes, for a pale ale called Demon Horse #66, and entered it into the pro-am category at the Great American Beer Festival.

The brewery will tap the first keg of that beer today (Friday, September 7) at 5 p.m., at its Barrel Bar location in the River North Art District, and Veldheer, noticeable at 6' 8", will be on hand from 5 to 7 p.m.

“I like a lot of hops,” Veldheer says. “This one is an extra pale ale with a pretty simple malt bill, but it was 100 percent double-dry-hopped with Galaxy. It’s probably the beer I brew the most.”

Most of the lineman's home-brewing happens in the off-season — Veldheer didn’t bring his equipment with him to Denver — but that doesn’t mean he’s not thinking about it. In the months he’s been here, Veldeer and his wife have visited Fiction Beer Company, Prost brewing (which he says was “a fun change-up," since he normally drinks more hoppy ales than German-style lagers), TRVE Brewing, Ratio Beerwoks, Our Mutual Friend and Great Divide. Next on his list is Cerebral Brewing, where he hears they make good hoppy stuff.

Jared Veldheer's homebrewing setup.
Jared Veldheer's Instagram page
Since Cerebral primarily makes hazy New England-style IPAs, however, that choice might get him into trouble with his wife. “She loves West Coast IPAs," Veldheer explains. "She just picks up so much on the low bitterness and high hop content” in the New England-style ones. “I like them both a lot, but if I had to pick between one or the other, I’d pick the West Coast. They are nice and bright, while East Coast beers can be cloying with the dry hops.”

Veldheer, who was a biology major at Hillsdale College in Michigan, first got into home-brewing about eight years ago when he took home a home-brewing kit after a Raiders gift exchange party. He fell in love pretty quickly, joining the American Homebrewers Association and trying out various recipes.

Fast-forward to 2016, and Veldheer cooked up a collaboration with both Arizona Wilderness and Huss Brewing, in the Phoenix area, and also submitted a recipe for his all-Galaxy pale ale in the AHA’s National Homebrew Competition, taking home first place in the first round in San Diego.

So when he was traded to the Broncos, Veldheer asked his marketing agent to help him find a brewery that might want to collaborate this year. “That’s how we got together,” he explains. “And the people at Great Divide have been extremely kind. I think they are as excited as I am about this beer.”

Veldheer is also excited to hit his first Great American Beer Festival in person; it will be in town September 20-22, and Veldheer plans to be there on Thursday so that he can fly to Baltimore on Saturday, where the Broncos play the Ravens. He has also been talking to his new teammates about craft beer. “A lot of them like it,” he says, “But they like all kinds of beer. I try to spread the good word.”
KEEP WESTWORD FREE... Since we started Westword, it has been defined as the free, independent voice of Denver, and we'd like to keep it that way. With local media under siege, it's more important than ever for us to rally support behind funding our local journalism. You can help by participating in our "I Support" program, allowing us to keep offering readers access to our incisive coverage of local news, food and culture with no paywalls.
Make a one-time donation today for as little as $1.