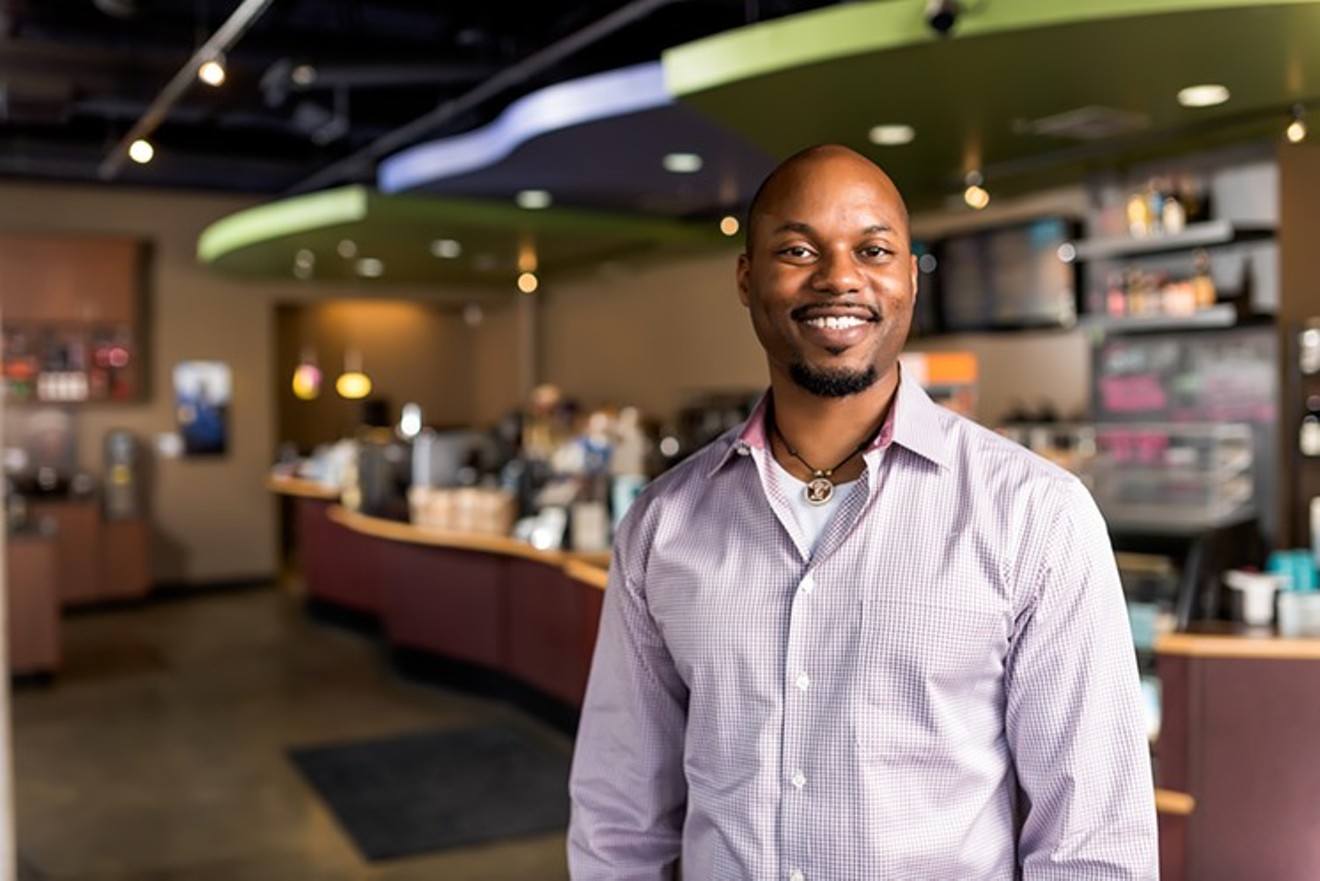 Ryan Cobbins is pushing a common-consumption project in Five Points. Coffee at the Point
When the Denver Department of Excise and Licenses finalized rules on a new common consumption area program for the city in May 2021, department officials expected the applications to come pouring in.

"I think we're going to see a lot of applications on June 1, and my best guess is we'll see the first common consumption areas pop up early fall," Eric Escudero, a spokesperson for Excise and Licenses, said at the time.

In 2011, the Colorado Legislature, spurred on by Glendale officials, legalized common consumption areas, which allow people to carry alcoholic beverages around the area rather then being required to consume them in the establishment in which they were purchased. In the decade since, towns and cities across Colorado — including Greeley, Black Hawk, Edgewater and Salida — have established such programs. But Denver was late to the party.

The Denver Department of Excise and Licenses had planned to unveil a common consumption area program in 2020; the pandemic kicked those plans into 2021. Still, once the program was adopted, officials made up for their tardiness with enthusiasm. "People can get their sake from the Japanese restaurant and then their glass of wine from the Italian restaurant and then walk around in the common area," explained Ashley Kilroy, then director of the Department of Excise and Licenses.

But nine months later, the City of Denver still has no operational common consumption areas — and no pending license applications.

"I am guessing your next question is: Why hasn’t anyone applied yet? We don’t know for sure," says Escudero. "Our guess is that the pandemic has altered the eagerness of some businesses who expressed an interest in applying for this license when Denver City Council was considering it. ...The creation of outdoor dining areas and communal dining areas in the city as a result of the pandemic could also have negatively impacted the interest of some businesses, as well. We also believe some restaurants and bars are struggling to find staff to fill their current needs, which could also have negatively impacted their eagerness to expand their serving areas to a common consumption area as well."

One other reason why no common consumption areas are licensed: The application process requires significant time and effort.

Adam Larkey, director of sales and leasing at Zeppelin Development, says that the Source and Source Hotel are working with food and drink operators in the RiNo complex to put together an application that they'll be submitting in the next few months.

"We are in the process of putting all those pieces together with our liquor license attorney," says Larkey. "It's a pretty comprehensive process of working with liquor license attorneys, getting the actual premises delineated. For us, it's also working with multiple tenants that are sort of affected by it. And making sure that everyone is on board. That's the other piece." 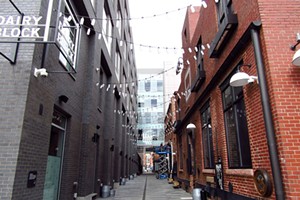 Under Denver's program, which is a five-year pilot, the city can offer ongoing common consumption licenses that will be renewed annually, as well as licenses for specific events, which will run for fifteen days. This second category will allow people attending an event to buy drinks from existing establishments and walk through the area, rather than having to purchase alcohol from outside vendors, which is what Denver currently requires.

Aside from the Source, other potential candidates include the Dairy Block, McGregor Square, Larimer Square, the Art District on Santa Fe and a project in Five Points that was initially projected to be the first to come to fruition.

"It’s been a slow-moving process," says Ryan Cobbins, a restaurateur who owns Coffee at the Point. Along with other Five Points businesses, he's trying to establish a common consumption area on a small strip of Clarkson Street between 26th Avenue and 28th Street. The group has already gotten that stretch of the street closed off, and plans to open the traffic-free area to patrons in April or May. But they won't have a common consumption area license by then.

"We submitted an application to Excise and Licenses several months ago and, of course, it got kicked back because there were several pieces that were not added on the application, which we knew was going to be the case because it was a brand-new process," says Cobbins  "I envisioned it being a ton of work. What I didn’t envision...is it being this elaborate in terms of what you need to do to have a common consumption."

"We did not count it as an official application because it was missing many required items," Escudero says. "Our hope is that eventually they will be able to apply so the many business owners in Five Points can reap positive economic benefits for this new license type. However, there are strict rules and requirements that have to be met for an application to go forward. I think it would be more accurate to refer to their application as a partial application."

Escudero adds that the department has been working closely with the Five Points group as "part of an overall effort by the city to make sure underserved areas of our city can benefit from this license."

"The city is attempting to make the process easy," Cobbins acknowledges. "The application process in and of itself is just daunting."
KEEP WESTWORD FREE... Since we started Westword, it has been defined as the free, independent voice of Denver, and we'd like to keep it that way. With local media under siege, it's more important than ever for us to rally support behind funding our local journalism. You can help by participating in our "I Support" program, allowing us to keep offering readers access to our incisive coverage of local news, food and culture with no paywalls.
Make a one-time donation today for as little as $1.