The soft chile relleno plate is a filling meal. Molly Martin
Denver's dining scene is making a big comeback — and we're hungering to go out. With so many new ventures and old favorites to visit after more than a year of restaurant shutdowns and restrictions, the choices can be overwhelming. So we're serving up Short Stop, with recommendations for things that should definitely be on your culinary short list. This week, head to Los Mesones.

The place: When Hector Hugo Soto and his wife, Adriana Chávez, opened their restaurant in 2006, there were three other Mexican eateries nearby. But now, as they get ready to celebrate the fifteenth anniversary of Los Mesones, it's one of just a handful of Mexican spots on this stretch of West Colfax Avenue east of Casa Bonita. Even Taqueria Mexico, which was located right across the street and claimed to have inherited the formula for the original Mexican hamburger made famous fifty years ago at Joe’s Buffet on Santa Fe Drive, has closed.

But despite being in a changing area, things are good. "A lot of neighbors, and new neighbors" make up the cast of regulars that frequent this small spot, Soto says. Phone and online ordering have also become a big part of the business.

There are a few tables on the patio that faces Colfax. Inside, you're greeted by a glass case filled with baked goods, from colorful cookies to flan and tres leches, along with a row of booths and a handful of tables with bright-orange chairs.

The staff is friendly, promptly seating tables and handing out copies of the multi-page menu while greeting regulars by name. Many guests settle in with a cold beer while they wait for their order. The restaurant has a variety of cocktail options, too, including micheladas, margaritas and palomas, as well as the Adios Mother Fucker, pictured on the menu as a bright-blue concoction containing rum, tequila, gin, vodka, Curaçao and Sprite. Since I was there for lunch on a weekday, I skipped that aptly named, booze-heavy option and went with a mango agua fresca ($4.50). 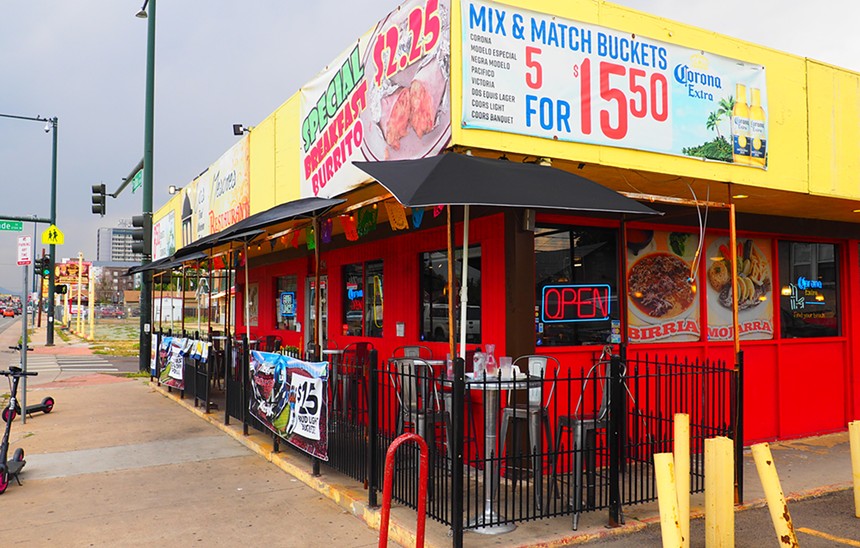 Los Mesones is one of the last Mexican restaurants on this stretch of Colfax.
Jay Vollmar
What you're eating: There's no shortage of options to choose from here. You could go for a full breakfast — available anytime — like chilaquiles ($9.75) or huevos divorciados ($8.75), served on a platter with potatoes and a charred jalapeño. Breakfast burritos start at just $2.25, and tacos of all kinds, from chorizo and adobada to barbacoa and lengua, range from $1.95 to $2.75 each.

The carnitas are a popular order, whether stuffed into a burrito, taco, huarache, sope, gordita or quesadilla. There are seven varieties of enchiladas ($9.75-$12.50), each topped with a different sauce, such as the enchiladas poblano with mole or the lecheras blanketed in a creamy sauce. An entire page of the menu is dedicated to seafood dishes, and another shows an image of a molcajete overflowing with meat. Birria, which is popular in Soto's home town of Aguascaliente, Mexico, would also be a wise choice.

I opted for the chiles rellenos ($12.95), a dish I regularly crave but which often disappoints, whether the problem is unmelted cheese inside or soggy batter that just falls off. In Denver, it's typical to be asked if you want your rellenos crispy or soft, but most people I know who grew up on Mexican home cooking believe that the traditional soft relleno, made by dipping a chile into an egg batter, is the only way to go.

Although I've been known to eat both types, I opted for soft at Los Mesones — and that proved to be the right move. The huge plate was almost covered by the palm-sized poblanos smothered in green chile and shredded cheese.  The plate also included sour cream, guacamole and rice and beans, along with a slice of tomato.

Oaxaca cheese oozed out when I cut into the first relleno — a very good sign. The batter was just light enough, and the orange-hued green chile was flavorful. You can choose your spice level; since I hadn't eaten at this spot before, I went for medium. It leaned mild for me; next time I'll go for hot green chile. One of the two rellenos on the plate was plenty for lunch, so I boxed up the other, picked out some cookies and a flan to go, and paid a bill that was still under $25.

As Denver evolves, the city needs spots like this to stick around. Los Mesones is a longtime neighborhood staple for good reason: The food is solid, dependable, delicious and reasonably priced. The owners could charge more, but they don't — because serving the community is exactly what they want to do.
KEEP WESTWORD FREE... Since we started Westword, it has been defined as the free, independent voice of Denver, and we'd like to keep it that way. With local media under siege, it's more important than ever for us to rally support behind funding our local journalism. You can help by participating in our "I Support" program, allowing us to keep offering readers access to our incisive coverage of local news, food and culture with no paywalls.
Make a one-time donation today for as little as $1.