Don't let the retail storefront look of the exterior fool you: There's just beer and booze for sale inside the Hoffbrau. Sarah McGill
Years had passed since I last visited Hoffbrau Colorado, the Westminster institution for food, drinks and music. So I decided to do what any sensible person would do: take a trip to the northwest suburbs with a friend to show her the joys of the Hoffbrau.

It was a Saturday afternoon wearing into evening, and my friend was surprised to see that the bar is located in a strip mall, off West 92nd Avenue and Wadsworth Boulevard. The massive space was once a Media Play, which you may remember from back in the early 2000s, when the thing to do was shop for CDs and DVDs at one of these overwhelmingly large and shiny stores. The space is actually a "new" location for the Hoffbrau, if you count a move in 2014 as recent. The move wasn't far, just a few blocks north and across Wadsworth from the old location at 7699 West 88th Avenue, which was also a large space in a shopping center but only had capacity for 300 people, not 500.

Prior to the move, the Brau had been open 28 years, so it's now in its 33rd year of operation, though ownership has changed a few times. The current building is huge, with a full kitchen, many booths and tables by the entrance, a long rectangular bar with seating on all sides, four pool tables, shuffleboard, several dart boards and another seating area in the back of the expansive main room. Behind a movable wall is yet another section that contains a stage for live music and a smaller back bar in the corner, as well as plenty of tables for private parties.

The Hoffbrau, whose name is an Americanized version of a German term for a cafeteria or bar, was bumping with people and the bass from a Justin Timberlake song as we rolled in. There were no stools available at the bar, which was packed despite a capacity to seat more than twenty people, so we settled for a bar-adjacent booth against a wall full of signed football memorabilia from several star players; the huge framed plaque next to us was signed by John Elway. Hoffbrau owner Ken Harrell collects sports jerseys, bobbleheads, pictures and anything else you can put on a wall or in a case. 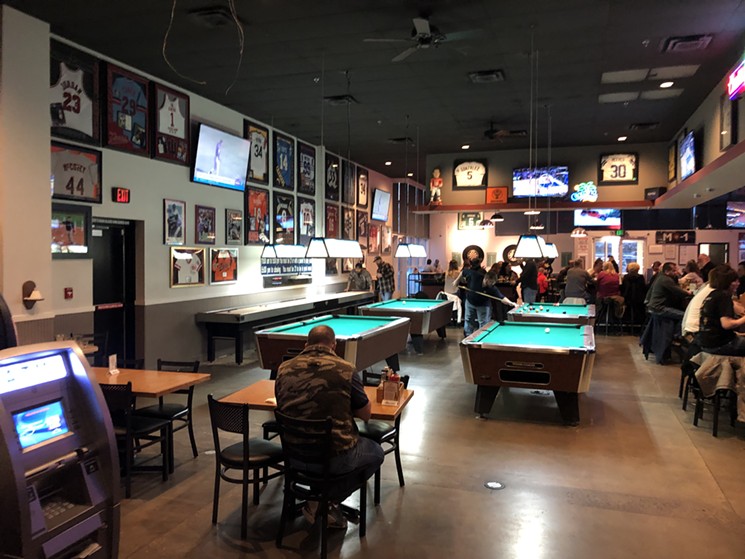 There's plenty of space and plenty of games to play at Hoffbrau Colorado, which is good, because live bands, drink specials and televised sports bring in big crowds any day of the week.
Sarah McGill
It's impressive how much the Hoffbrau looks like a bar; given the strip-mall space and location, it could easily have lost its soul and felt more like a warehouse, big-box store or dance club. The TV sets, decorations and beer ads covering the large, retail-looking front windows make you forget where you are and give the bar ambience, without being too dark for families with kids just coming in for lunch or dinner. It's not cold or corporate, the folks are friendly and from the neighborhood, and many have been coming here for years.

The food menu mirrors the space itself in its expansiveness, with many burger, sandwich and salad options, as well as full-on steak dinners, Mexican entrees and breakfast all day, every day. My friend and I ordered beers from the draft list — it was happy hour, which runs 2 p.m. to 6:30 p.m. even on weekends — and studied the menu intently. I ended up with a jalapeño chicken wrap, which came out with spicy ranch dressing and guacamole, and my friend got fried pickle spears because she is obsessed with fried pickles in spear rather than the more common chip form. The pickle spears and the housemade kettle chips that I chose as my side were solid — nice and crispy on both accounts.

The Avs game was on, as well as some college basketball showdowns, filling the many large TV sets — 57, to be exact — mounted around the bar. During football season, the kitchen offers a special game-day menu on Sundays and Monday nights, with deals on hot dogs, wings and sliders, and the bar pours $2.50 domestic draft beers. Other specials worth paying attention to are all-day happy hour on Sundays, free pool on Mondays and a double whammy on Tuesdays: "2Fer Tuesday" on beer, wine and wells for everyone in the house after 10 p.m., plus $1 draft beers for all service-industry employees after 9 p.m. Dollar beers definitely make this one of the best SIN specials I've encountered around town.

Live music is a huge draw at the Brau, with Thursday night rock night, featuring all kinds of rock and metal acts, and assorted live music of various genres on Fridays and Saturdays. You can find a little bit of country, a little bit of rock and roll, and a little bit of everything else, including ’80s cover bands, Latin music, funk, soul and pop music of all flavors. The stage is often home to my friend's dad's favorite band, Hot Lunch, a funk ensemble well known in the north suburbs for sets at the Hoffbrau as well as nearby spots Brewski's and Babe's Night Club.

As part of his sports-memorabilia obsession, Harrell recently hosted a college national championship game-watch party, with former Broncos players signing autographs for patrons. Supporting the boys in blue is the charitable cause of choice for the bar ("thin blue line" flags and logos can be seen throughout the place), which hosts fundraisers for MC1 Foundation, providing aid to officers injured in the line of duty and their families.

The crowd of old and young neighborhood residents, kids and grandparents, bros and ladies with teased hair, including multiple groups of people celebrating birthday parties and other events, continued to grow in size as the night crept in. The Steve Thomas Band, an ’80s cover band, was set to take the stage later, and although there would be no cover, we had other plans back in Denver proper, and our time in Westminster was drawing to a close. We crossed the threshold back into the reality of the shopping mall parking lot outside and hit the highway, leaving behind the massive yet somehow friendly and homey Hoffbrau Colorado for another day.

Hoffbrau Colorado is located at 9110 Wadsworth Parkway in Westminster and is open from 11 a.m. to midnight Sunday through Wednesday, and 11 a.m. to 2 a.m. Thursday through Saturday. Call 303-422-7755 or visit the bar's website for more information and band schedules.
KEEP WESTWORD FREE... Since we started Westword, it has been defined as the free, independent voice of Denver, and we'd like to keep it that way. With local media under siege, it's more important than ever for us to rally support behind funding our local journalism. You can help by participating in our "I Support" program, allowing us to keep offering readers access to our incisive coverage of local news, food and culture with no paywalls.
Make a one-time donation today for as little as $1.