The High Lonesome Isn't So Lonesome in Highland 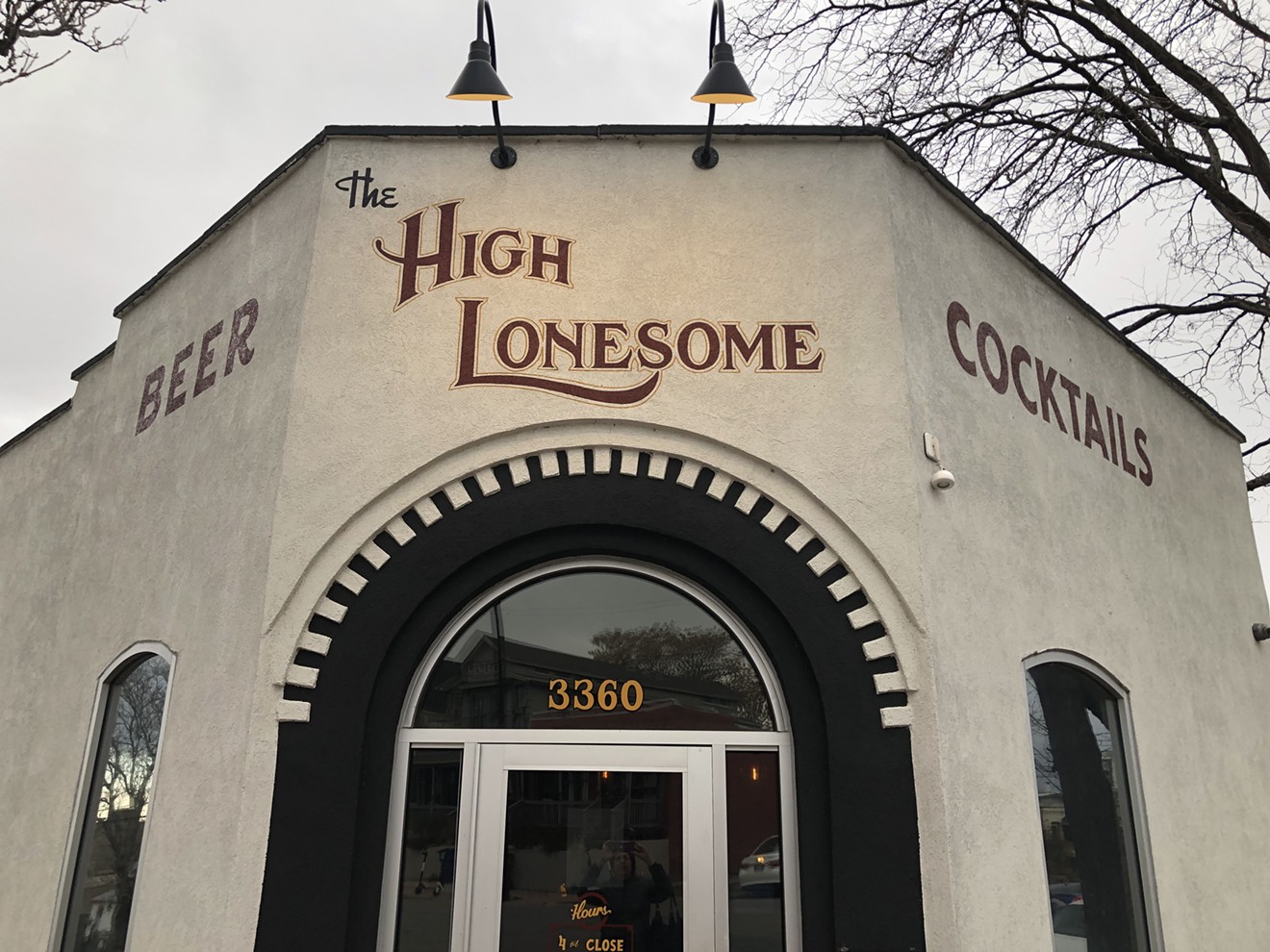 The High Lonesome is making a home for neighborhood bar-goers in the former location of the Classic Tavern and the Arabian. Sarah McGill
The High Lonesome, I was recently told, is the kind of neighborhood bar "where the cool kids go." But I went anyway, despite the heavily gentrified Highland neighborhood the bar serves, and despite the Friday night crowds of twenty- and thirty-somethings prowling for drinks before dinner — along with a fair share of upscale gray-haired couples who can probably afford to live nearby.

Inside, the High Lonesome feels more spacious than it is, mostly because of the spare and plain decor and the high ceilings. Bare walls painted gray add to the sleek, modern vibe, and behind the bar, custom shelves of pale wood hold an extensive collection of liquor bottles. A taxidermied buffalo head looks down over the wall-mounted beer list, adding a vintage touch. Amber glass light fixtures, leather booths and framed pictures of cowboys suggest old Colorado dive bars, but this is clearly not a dive bar. In fact, it feels more like it could have been created by Bobby Berk, the interior designer on the Netflix makeover show Queer Eye (which I strongly recommend watching — even if you never set foot in the High Lonesome — to help you try harder to be your best self).

The jukebox at the High Lonesome offers real CDs, with selections ranging from Barry White to the War on Drugs.
Sarah McGill
Neighborhood regulars pop in and order their drinks of choice — some bringing their own food, since the High Lonesome doesn't have a kitchen. If you don't coming toting snacks, though, you can partake in the bar's pickled eggs, made at the Universal, a breakfast and lunch spot just a few blocks away. The eggs come courtesy of Steven Sharpe and Kourtnie Harris, the duo that runs both the High Lonesome and the Universal. They opened their bar here after the Classic Tavern left the scene in 2016, with a plan to run just a simple neighborhood watering hole. The bar lives up to that reputation, coming in a touch above typical sports bars or strip-mall joints in the suburbs, but without seeming pretentious (despite my Bobby Berk reference). A person could, for example, bring a date here and feel good about themselves, which is what a smattering of couples seem to be doing as we look on from our vantage point at the bar. Our bartender notes that service-industry folks coming in for after-work drinks from the many restaurants and bars in the area make up much of the late-night clientele.

The bartender also points out a jukebox filled with a collection of actual CDs, which she describes as "only good music, not Hall and Oates." Despite the tight quarters, there's also a pool table squeezed in next to the jukebox.

Our bartender is cool and adorned with plenty of tattoos, but she's dressed in just a tank top and jeans, not a special bartender uniform common among ultra-hip speakeasies and cocktail bars. There are only three staff members on duty — two bartenders and a bar back — and none of them exude a better-than-you attitude. They can make some nice cocktails if you want; the drinks list is seasonal but not ridiculous, so most of the ingredients are easily recognizable. The tap list has a good variety of local craft beers as well as random finds like Czechvar (one of my favorites), something that's been served since opening day. 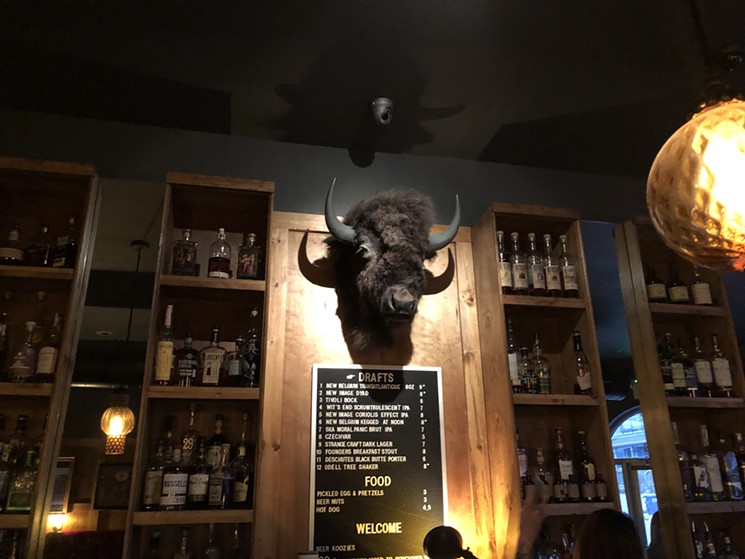 Lots of liquor bottles and a buffalo head are on display behind the bar at the High Lonesome.
Sarah McGill
We catch the end of happy hour, which runs from 4 to 7 p.m., taking advantage of $4 wells and $1 off draft beers. Our massive, frosty mugs of Czechvar are welcome despite the quick cold front that sends snow flurries whipping outside the windows (a common Denver occurrence this spring). Other specials during the week include Whiskey Wednesdays and $2 tallboys on Tuesdays, and I discover that the first and last Wednesday of every month are bike nights, welcoming motorcycle enthusiasts with drink specials and catered food.

Long before the High Lonesome moved in, the building was home to the Arabian, which was part of the "Devil's Triangle" of bars that also included previous incarnations of the Highland Tavern across the street and the Rockstar Bar down the block, which was torn down and replaced by Wee Katie's, a bland, suburban-looking Irish pub that didn't last long. Rumor has it that someone died a violent death on the pool table in this very building back in the neighborhood's rougher days (when Mafia members and street gangs ruled the Northside).

With all the talk of murder, I ask our bartender about one of my favorite topics: ghosts. Her opinion is that the place might be a little haunted, since she says she's heard a voice calling her name when no one was there and has heard a noise or two that she couldn't figure out.

But tonight the place is filled with life — and the ghosts of the Devil's Triangle seem mostly at rest.

The High Lonesome is located at 3360 Navajo Street and is open from 4 p.m. to 2 a.m. daily. For more information, call 720-287-4324 or visit the bar's Facebook page.
KEEP WESTWORD FREE... Since we started Westword, it has been defined as the free, independent voice of Denver, and we'd like to keep it that way. With local media under siege, it's more important than ever for us to rally support behind funding our local journalism. You can help by participating in our "I Support" program, allowing us to keep offering readers access to our incisive coverage of local news, food and culture with no paywalls.
Make a one-time donation today for as little as $1.