Li'l Devils: Baker's Neighborhood Hangout That Happens to Be a Gay Bar Li'l Devils anchors the southern end of Baker's nightlife strip on Broadway. Sarah McGill
I have to confess, St. Patrick's Day snuck up on me this year. I figured the main festivities for one of America's favorite drinking holidays associated with another country would be happening over the weekend. After all, this year, St. Patrick's Day itself falls on a Friday. But I thought wrong — as I discovered last Saturday when I tried drive through downtown on my way to brunch and ran into parade street closures.

This error in calculation also became obvious when I met a friend for a happy-hour drink at his local spot, Li'l Devils Lounge. I often drive by Li'l Devils, located just north of the intersection of South Broadway and Alameda, and think that I should go check it out. Now I had the opportunity, with a local tour guide to show me the sights. Upon entering the bar, an explosion of shamrock and leprechaun decor and patrons bedecked in green outfits told me that the weekend before St. Pat's was huge for Irish-themed drinking, actual holiday dates be damned. No matter, I thought, I will surely find a way to get into the spirit, despite my amateurish lack of green attire. My friend arrived immediately after me, and we ordered green Bud Lights to fit in with the other patrons. I think it worked — or maybe we fit in because my friend knew most of the people in the bar. 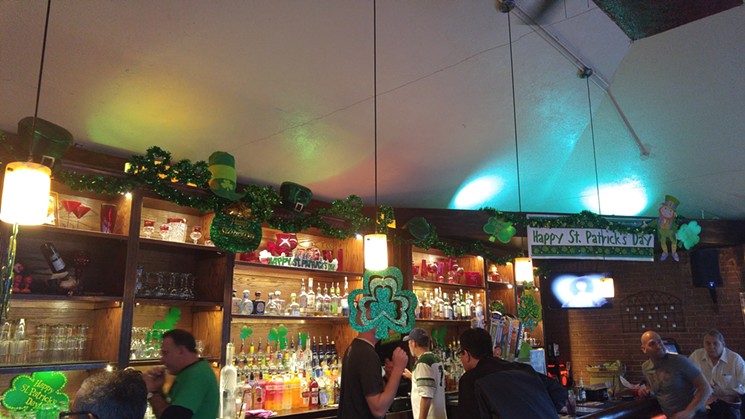 The staff at Li'l Devils leaves nothing un-decorated when it comes to holiday celebrations.
Sarah McGill
The smallish space was reasonably full of bar-goers, a good percentage of them dressed in green. The crowd was older, gayer and less hipster than your average bar in the Baker area, which was refreshing. I enjoy Baker, but sometimes I know my haircut just isn't ever going to be cool enough for the people at Sputnik. Everyone was friendly, particularly the owner, Tony Fleith. After a quick managerial round through the bar and bathrooms (Fleith maintains a tidy establishment), he came over to check on us and we got the story on Li'l Devils.

Fleith has worked in the bar industry around town for more than 25 years, and was actually employed for six years at the Barker Lounge, a now-defunct gay dive bar that was the previous occupant of the space at 255 South Broadway. When he mentioned that fact, I realized that I had been in the bar back when it was the Barker Lounge so many years ago, but it looked so much nicer now and so different that I hadn't recognized it. Fleith had always wanted to open his own bar, and he finally did in December 2012, after completely remodeling the interior, which was in disrepair after the Barker exited the scene.

In Li'l Devils, Fleith has created a neighborhood bar that also happens to be a gay bar. He's committed to being a positive force in the Baker area and the broader Denver community. On the second Thursday of every month, an army of volunteers led by Jim Scharper and his organization, Feeding Denver's Hungry, takes over the bar. The team moves all the tables around to create an impressive sandwich assembly-line system capable of turning out up to 400 sandwiches in one evening. The sandwiches are distributed to homeless citizens of Denver out and about in the neighborhoods, and are also given to Urban Peak, a local youth homeless shelter. Fleith and the crew at Li'l Devils also host fundraising events periodically, sometimes in conjunction with live entertainment.

Speaking of live entertainment, blues bands, themed drag shows and drag bingo are some of the events that you might catch at Li'l Devils. Fleith loves decorating and celebrating holidays big and small. My friend tells me it's essential that I come back during the Christmas season to experience the winter-wonderland environment at the bar. If the super-festive St. Patrick's Day look in the bar is any indication, the decoration game is strong here. Summertime pig roasts and shrimp boils, Oktoberfest stein-hoisting contests, Broncos parties, Mardi Gras and a huge Halloween bash all add to the celebration over the course of the year at the bar. The main bar area and back patio also are rented out for private parties. The large, secluded patio has sort of a tiki-bar or beach theme, with an outdoor bar and plenty of space to relax and pretend you are in the tropics, despite being right next to a Conoco station on Broadway. The beach, or at least a beach vibe, is closer than you think on the back patio.
Sarah McGill
As my friend and I caught up over our steins of green Bud Light, we noticed that the TVs were split between college basketball games and a channel playing a mix of music videos from Chaka Khan, Whitney Houston  and Lady Gaga— which, again, seems to reflect the intent to be both a neighborhood bar and a gay bar. Under the TVs are electronic dartboards, which apparently are part of a dart tournament every Sunday afternoon at 2 p.m., in case just sitting and enjoying a beer isn't enough for you. Another weekly draw at Li'l Devils is the daily happy hour that runs from 3 to 7 p.m., offering $3 Smirnoff and well drinks, $3 domestic draft and bottled beers, and $4 house wines and craft and imported beers.

Fleith brought us another round of green beers and showed us some pictures on his iPad of the parties and drag shows that took place over the course of the past year. He also mentioned that the bartenders at Li'l Devils are experts at making frozen and specialty cocktails. My friend and I resolved that we need to come back in the summer and drink something frozen and garnished with fruit on that patio that was unfortunately a little too cold to enjoy just yet.

After a bit more time basking in the glow of Madonna videos and shiny green decorations, my friend and I headed out. I concluded that my unexpected St. Patrick's Day had turned out better than I could have hoped. It was a nice change of pace, drinking my green beer with some nice older gay men in Baker this year instead of wandering around in LoDo desperately trying to find a bar that doesn't charge $20 and my left shoe as cover (which may or may not have actually happened in the past). So whenever you are celebrating St. Patrick's Day — or any other holiday, for that matter — stop by Li'l Devils to get in the spirit with awesome decorations and minimal damage to your wallet and your dignity.