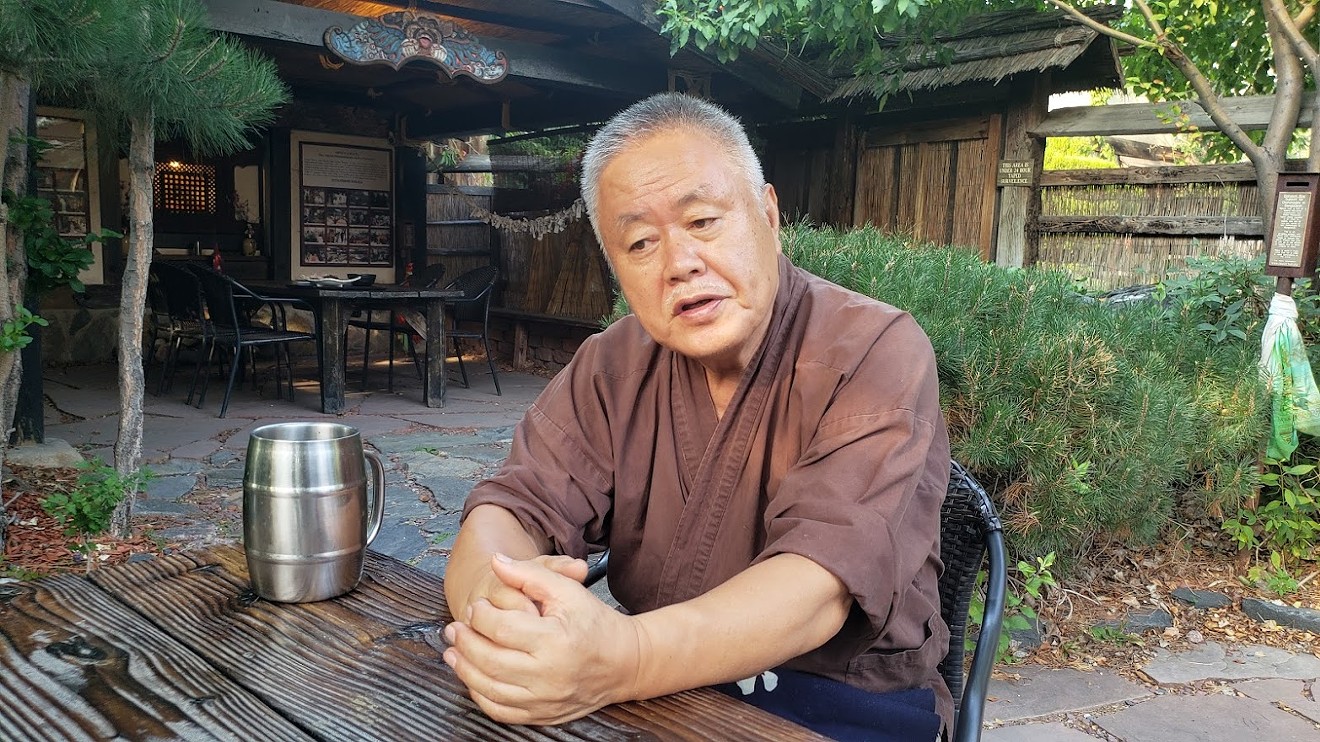 Gaku Homma in the garden at Domo. Gil Asakawa
Gaku Homma, the owner and head chef of Domo, the country-style Japanese restaurant in the middle of the city that’s served a loyal clientele for nearly three decades, got a rude awakening in July, when a forty-second video showing scenes from the eatery with no narration went viral on TikTok.

The next day, over 100 people were waiting at the door when the restaurant opened, Domo's Facebook page reported. The explosion of business took all the seating in the garden and backed up the kitchen, causing long waits all day. Within a few weeks, would-be customers were lining up from the restaurant's entrance at 1365 Osage all the way to Colfax Avenue and around the corner.

Homma, who is also the sensei, or teacher, of the Nippon Kan Aikido Dojo that is attached to the restaurant, was both terrified and mystified by the sudden crush of customers. “I don't know why people come or what was interesting, because that video's only forty seconds, and there is no comment," he says. "I told my students, it's very scary that one thing can have that much power.”

That power brought an all-new clientele to the restaurant, which many business owners would consider a good problem. But Homma says it was a “big problem” for Domo, and told his longtime customers that they might want to stay away for now. He posted this on Facebook: “To Our Beloved & Valued Regular & Repeat Customers, Please accept our apologies for the longer wait time than usual and for any inconvenience and unpleasant experience the current situation may have caused for you. We are hoping the current frenzy will subside soon enough. Thank you for your understanding.”

Homma wound up closing Domo for several weeks at the end of July to regroup. And when the restaurant reopened in mid-August, it was with limited hours, cutting back from seven days a week to Fridays through Sundays only, from 11 a.m. to 8:30 p.m. Domo has also restricted entrance to only twenty diners at a time, so there is still a wait — as long as one or sometimes even two hours. 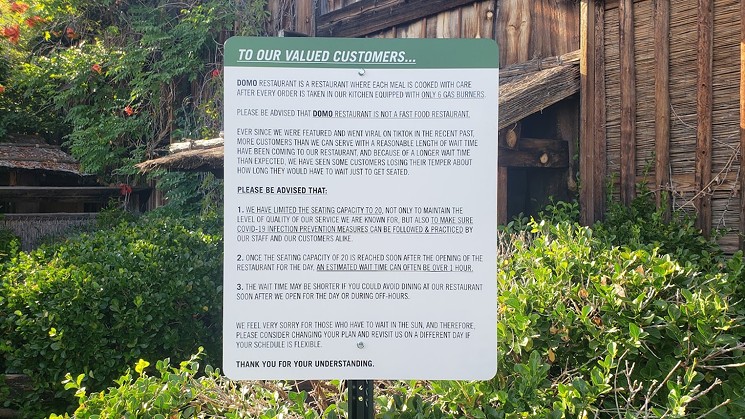 Domo has posted a sign explaining its philosophy.
Gil Asakawa
Although the viral video is now gone, it has been replaced by others, and people keep coming. Some of the post-TikTok customers are pushy, milling about to take photos and selfies. Some are wearing cosplay outfits from Japanese anime.

The constant stream of customers is taxing, even three days a week, and Homma admits that he’s tired. He waves his hand around the Japanese garden. “Like this lunch, just ball-club, I think people so far about 120, probably after two, about 200-something. Mo ii – nanajuuichi," he says. Translation: "That’s enough – I’m 71!”

Homma was fine with his regular customers. “Already we have good enough. We know, it was simple, like how much do we buy? Now we can’t tell, we can’t plan. Mo atama itai," he says: "I get a headache."

He cut capacity down because “we can control twenty customers at one time,” Homma notes, explaining that he doesn’t want to increase the number because service will suffer. “If you wait outside, it’s not yet service. If you want to wait, that is your decision. Sometimes you accept ‘You say wait is two hours,’ and if you understand, thank you. That’s like a business contract... 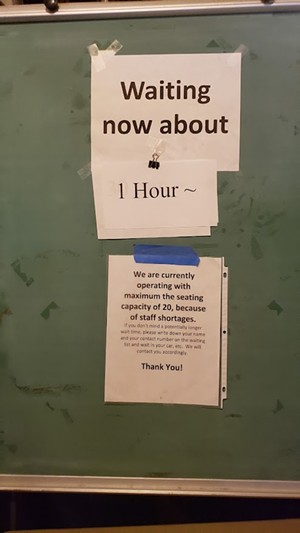 “Some of the customers are beautiful," he adds. "I can't make everybody happy. Sometimes I get very strict and say, ‘Do you want to eat at this restaurant or not? Okay, please leave.’”

He’s happy when others waiting in line applaud when he asks troublemakers to depart, but even so, he says: “Tsukareta. I am tired.”

After all, he points out, “My real job is not the restaurant. It’s the dojo.” The aikido dojo stayed open three days a week during the restaurant’s downtime. Homma is also active in refugee issues; he helps refugees from Myanmar, supports international orphans and orphanages, and does volunteer work in countries from Brazil to Mongolia.

Domo had thirty employees at its pre-pandemic peak but now has fewer than ten, and has had trouble finding new applicants. Homma knows that people, including his current staffers, are still suffering. “Corona is not only sick to the body and physically," he explains. "It’s to all levels of society and economy, and psychologically, too.”

Now that he's passed through the worst of the chaos, Homma actually sees the timing of the TikTok-induced crisis as a blessing of sorts: “Choudo-ii, yo. Choudo ii omoimasu," he says. It was "just in time, just in time," adding a level of chaos and stress that forced Homma and the business to “cool down.”

Being open just three days a week has made his operation more manageable. “I’m very happy with this now," he says. "We have control not putting everybody in the restaurant."

Instead, he says, “People are willing to wait in their car, and we call when they can come in. We are lucky.”
KEEP WESTWORD FREE... Since we started Westword, it has been defined as the free, independent voice of Denver, and we'd like to keep it that way. With local media under siege, it's more important than ever for us to rally support behind funding our local journalism. You can help by participating in our "I Support" program, allowing us to keep offering readers access to our incisive coverage of local news, food and culture with no paywalls.
Make a one-time donation today for as little as $1.