Eight Breweries That Plan to Open in Denver in 2019

Raices Brewing Co.
The past year was an unusual one for breweries in Denver. At least one (Goldspot) was sold, while three others (Deep Draft, Beryl's and Zephyr) closed and were reopened with new owners and new names (Thirsty Monk, 14er Brewing and Blue Tile, respectively). But despite the changes and the overall slowdown in the craft-beer industry, Denver boasted a substantial group of brand-new breweries. In addition to the three names above, the city has welcomed Oasis Brewing, Long Table Brewing, the Grateful Gnome Sandwich Shoppe & Brewery, Burns Family Artisan Ales, Dos Luces, Novel Strand Brewing, Liberati Osteria & Oenobeers, a new Odell Brewing taproom and a New Belgium Brewing pilot system. Then there's Tom's Urban Kitchen & Brewery, with beer made by an outlet of Tivoli Brewing, that's up and running at Denver International Airport, and the Cultural Center, a joint project of Westbound & Down and Amalgam Brewing that will host events and serve beer during occasional taproom hours.

What will 2019 bring? More breweries, of course — although the pace may run behind 2018's surprising clip. The upcoming year could also hold bad news, as there are a few local breweries teetering on the edge. Even if some of them close, however, Denver clearly hasn't lost its thirst for the delicious buzz of craft beer. Here are eight new breweries (some of them from familiar names) that will open their doors in the new year.

14er Brewing
14er Brewing
2801 Walnut Street
When: TBA
14er Brewing, which didn't have a location to call its own in 2017, made some big leaps in 2018, first by opening a rudimentary tasting room at 2801 Walnut Street, and then by taking over the lease and equipment of the former Beryl's Beer Company at 3120 Blake Street. Owners Andrew Kaczmarek and Nato Francescato have now morphed that second spot into the rebranded 14er Brewing and Beer Garden are planning a grand-reopening party in February or March. But they are also hoping to begin work in January on a full remodel of the Walnut location, which they hope to turn into a showplace for sour beers later in the year. 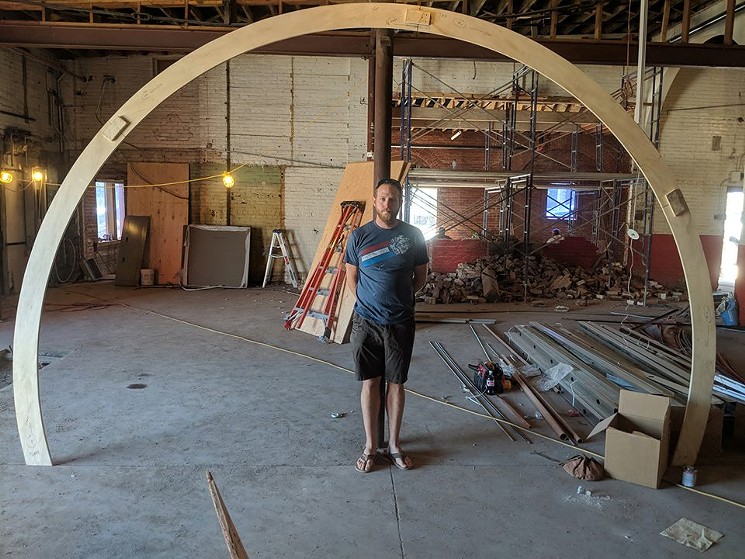 FlyteCo Brewing
FlyteCo Brewing
4499 West 38th Avenue
When: Summer
Jason Slingsby, Eric Serani and Morgan O'Sullivan have signed on to open a 4,000-square-foot brewery inside the former Merkl's garage at the corner of 38th Avenue and Tennyson Street, which is being redeveloped into a project that will include three businesses; construction is being carried out by Built, which has done several other spectacular breweries. Before becoming Merkl's, the building was a streetcar power station and is in a perfect position to be a gateway to the Tennyson Street shopping district. It will join the Grateful Gnome, De Steeg Brewing, Call to Arms Brewing and the upcoming Empourium Brewing (see below) in the neighborhood. Before changing its name to FlyteCo, this brewery in planning was called Aero Craft.

Jonathan Shikes
Counter Culture Brewing
205 East Seventh Avenue
When: Spring
The word "counterculture" usually describes anti-establishment movements (think of those social upheavals of the 1960s), but in the case of Counter Culture Brewing, it refers to an actual counter where people will be able to order lunch or dinner from this planned brewpub's small kitchen. In fact, owners Kevin McCrossin and Justin Martinez picked this neighborhood in part because of its focus on food, and they will offer made-from-scratch plates from a wood grill. But there will also be beer, of course. The two have purchased a ten-hectoliter brewhouse (about 8.5 barrels), and although both have worked in the beer industry, they plan to hire a professional brewer to oversee the beers — of which they hope to have a wide variety.

Jonathan Shikes
The Empourium Brewing Company
4210 Tennyson Street
When: TBA
The Empourium, which is currently under construction, will join an already bustling craft-beer scene on Tennyson Street. Located right across the street from César Chávez park in the former Rocky Mountain Driveline building, the brewery will focus on "the local community, our brand culture, and of course the beer." It will come complete with garage doors and a south-facing patio. The brewing, meanwhile, will be headed up by a brewmaster whose name is under wraps for now but who has won several awards at another brewery.