Jeff Fierberg
"I really felt like a unicorn when I first started in the ’90s,” says Emma Alexander of her early career, when it was uncommon for a Black woman to be a bartender. “I got put through the wringer a little. I bartended at certain places, and people would not let me serve them."

After more than two decades in the industry, Alexander has recently been recognized for her work; she was named a "culture shaker" by a nationwide Gentlemen Jack campaign and was selected as one of Chilled magazine’s 100 Market Ambassadors. She also organizes events to create community in her role as co-president of the Colorado chapter of Women Who Whiskey, a worldwide networking and educational organization.

Alexander hopes her presence as a Black woman in the often white and male-dominated business can help inspire others regardless of race, ethnicity, gender or background. “Always remember," she remarks, "no matter what anyone says, you’re the strongest person in your life, and you should not be discouraged."

Alexander got her first industry job in 1997 at Cell Block Nightclub in Cincinnati, first at the coat check before becoming a shot girl and eventually a supervisor and bartender. Three years later, she left Cell Block to help open the U.S. outposts of German beer franchise Hofbrauhaus.

In 2001, a white Cincinnati police officer shot and killed an unarmed Black man, Timothy Thomas, leading to years of unrest in the city and contributing to Alexander's decision to relocate to Atlanta in 2006. “I felt more comfortable [in Atlanta] because I saw more people that looked like me,” she says.

In her new home, Alexander became involved with the distribution end of the beverage industry, driven by curiosity and a desire to be well-rounded in her career. She questioned why she didn’t see many women or people of color in distributor or supplier positions, but she also learned about the people who contribute to the many links in the supply chain.

“I met a lot of farmers that grew the grain that’s used in whiskey," she notes. "Everybody from the farmer to the brewer to the distiller. It was very much grassroots, and so personal. I felt like I was helping their kids get to college." She studied the fine details of the process, which deepened her respect for the product. Hers was a different approach than many other distributors, but it allowed her to understand the story behind each bottle she sold. 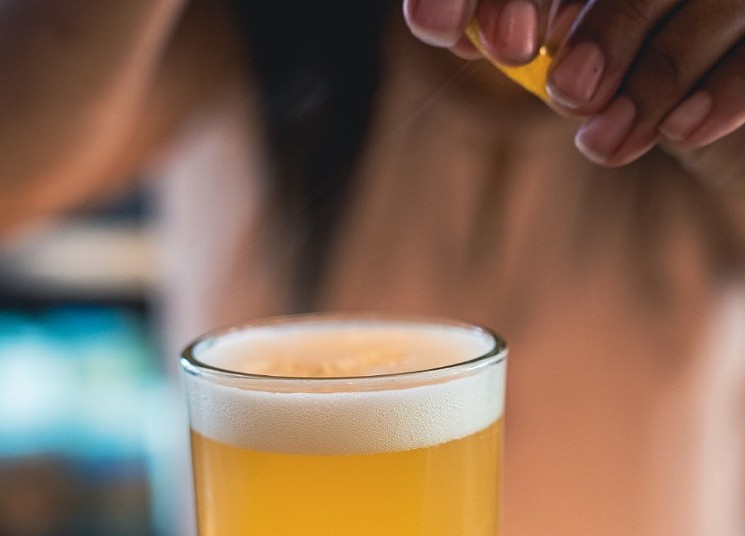 Low-alcohol cocktails like Alexander's Not an IPA are popular right now.
Jeff Fierberg
Alexander joined Bonanno Concepts after relocating to Colorado in 2019. The restaurant group includes the Denver Milk Market food hall at 1800 Wazee Street as well as nine standalone restaurants serving everything from Italian to barbecue. In her role, she works with bartenders and managers to craft drink menus that complement each concept's atmosphere and food offerings, as well as helping with the fundamentals such as budgeting and vendor management that allow all the parts to come together. The varied responsibilities make her job similar to that of a symphony conductor, she says.

She also keeps an eye on trends, scouring the internet, reading articles and taking note of what various bartenders' guilds are highlighting. Current trends include the increased popularity of traditional cocktails as well as no- and low-alcohol drinks, like the Not an IPA cocktail Alexander created at Denver Milk Market, made with amaro Montenegro, elderflower liqueur, Lo-Hi aperitif and fresh grapefruit juice.

While Alexander notes that the beverage industry today still lacks diversity, she believes the acknowledgement she's received is an opportunity to break down barriers for others to follow her path.

A huge part of being a beverage director is listening to others. “If you think you know it all, you’re too busy talking," she explains. "When you listen and observe, you can be a better person."

For more information about the Bonanno Concepts restaurant group, visit bonannoconcepts.com. To learn more about the Colorado chapter of Women Who Whiskey and its upcoming fall events, visit womenwhowhiskey.club/colorado.
KEEP WESTWORD FREE... Since we started Westword, it has been defined as the free, independent voice of Denver, and we'd like to keep it that way. With local media under siege, it's more important than ever for us to rally support behind funding our local journalism. You can help by participating in our "I Support" program, allowing us to keep offering readers access to our incisive coverage of local news, food and culture with no paywalls.
Make a one-time donation today for as little as $1.
Claire Duncombe is a Denver-based freelance writer who covers the environment, agriculture, food, music, the arts and other subjects.
Contact: Claire Duncombe