Corvus Coffee buys its beans directly from small-lot farmers. Claire Duncombe
“Advertising Fairtrade is like advertising ‘We almost pay minimum wage,’” says Philip Goodlaxson, owner of Corvus Coffee. “It’s not a huge thing to be proud of.” Corvus doesn’t sell coffee beans certified as Fairtrade because Goodlaxson doesn’t think the certification gives farmers the financial support and product recognition they deserve. Still, he adds, anything that gets consumers thinking about the story and the people behind their cup of coffee is important.

Fairtrade certification implies that standards are in place to protect workers and the environment while producing quality products. The certification evolved during the second half of the twentieth century, and while its intentions were just, some, like Goodlaxson, question whether the label still protects and compensates to the extent Fairtrade International claims. Goodlaxson has found his alternative by working directly with small-lot coffee farmers and by paying them a premium price to ensure a symbiotic business relationship.

“It doesn’t take much,” Goodlaxson explains, expressing frustration in the living standards many coffee farmers face. He reflects on La Vega, Christian Osorio’s small-lot coffee farm in Tarqui, Colombia. When Goodlaxson first met Osorio in 2018, the farmer’s home had a dirt floor, and he processed his coffee fruit in plastic buckets, using neighbors’ equipment to ferment and pulp the beans.

Goodlaxson recognized the quality of the coffee and noted its distinct blackberry taste. He thought its worth exceeded market price, and he bought all six of the 150-pound coffee bags at $5 per pound.

“Fairtrade certified coffee cooperatives currently earn the Fairtrade Minimum Price of $1.40 per pound — about 40 percent more than the current market price,” Peter Kettler, Senior Coffee Manager at Fairtrade International, wrote on the Fairtrade America website last year, adding that the price should be raised to $2 per pound to guarantee a living wage, and encouraging buyers to "start by paying more for coffee" above the market rate and the Fairtrade minimum. In addition, Fairtrade tries to support workers by investing a twenty-cent-per-pound premium in productivity and quality initiatives chosen by the co-ops, such as infrastructure and health-care upgrades. But in order to be a Fairtrade member, coffee producers must work in co-ops, a caveat some believe to be negative because it results in funneling the money toward collective improvement projects versus individual farmers.

Another complication is the process of becoming certified. In her 2011 article in Stanford Social Innovation Review, Colleen Haight found certification standards to be 31 pages long, detailing everything from “member farm size, electoral processes and democratic organization, contractual transparency and reporting, and environmental standards, to name only a few.” While the standards are meant to protect workers and ensure consumer confidence, they can have the unintended consequence of limiting the agency of farmers — and the cost of implementation can also be high.

Goodlaxson wants farmers to be in control of their own product. “I work at origin, so I see how these things are implemented," he points out. "Certifications like that are good for awareness on the consumer side...[but] Fairtrade and organic have a lot less impact than they’re marketed to have.”

He believes, instead, that a small amount of investment in individual farms can go a long way. Not only does Goodlaxson pay a higher price per pound, but he also pays a premium so that farmers can improve their equipment. He loves seeing what they create with the support. In 2019, a year after his first visit to La Vega, Goodlaxson returned to find that Osorio had built a two-story wet-processing mill and multiple raised beds, and had planted a completely new field with a different variety of coffee tree. 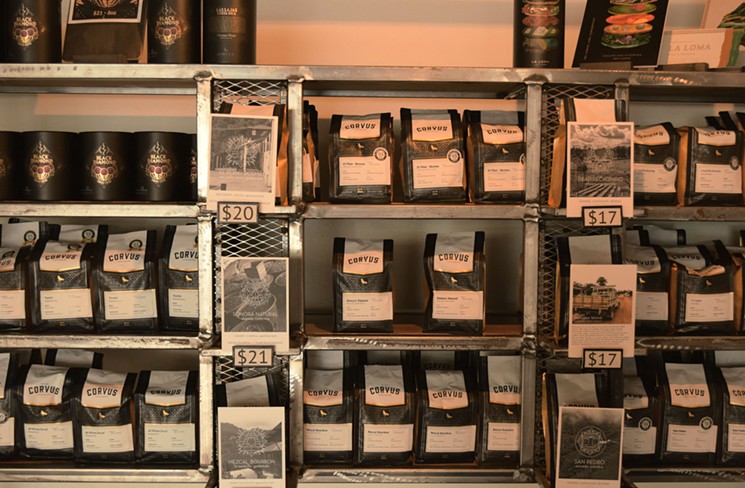 Corvus customers have learned to value the coffee that comes from specific farms.
Claire Duncombe
Farmers want to produce quality beans because it’s a reflection of their work, Goodlaxson says. When he goes to visit the farms he works with, he takes packaged Corvus coffee bags and shows them photos of how Corvus markets their product here in Denver.

That marketing to consumers is essential, because it cultivates customer appreciation for both the flavor and the story behind the beans. Corvus customers are prepared to pay more for each bag because they know where that money is going and who they’re supporting on the other side, he explains. It’s a transparent supply chain.

“Consumers should ask why coffee is priced as it is,” Goodlaxson says. “That’s a great question to demand of your roaster. How are you buying? Where are you buying?” He wants customers to maintain a curiosity about the story of the product from its inception to its completion, always remembering that there are people on the other side.

Corvus Coffee Roasters maintains three coffee shops in metro Denver. Visit the company's website for details and to order beans online.
KEEP WESTWORD FREE... Since we started Westword, it has been defined as the free, independent voice of Denver, and we'd like to keep it that way. With local media under siege, it's more important than ever for us to rally support behind funding our local journalism. You can help by participating in our "I Support" program, allowing us to keep offering readers access to our incisive coverage of local news, food and culture with no paywalls.
Make a one-time donation today for as little as $1.
Claire Duncombe is a Denver-based freelance writer who covers the environment, agriculture, food, music, the arts and other subjects.
Contact: Claire Duncombe