Costillas de cordero with frijoles de olla. Mark Antonation
A year and a half has passed since the sign went up for Villagran, at 1512 West Alameda Avenue. At the time, it looked like Maria Garcia and Marco Angeles, who'd operated the Villa Real food truck at the same address for years, would open their brick-and-mortar restaurant any day; the family had constructed the building from the ground up over several years, paying for it as they went, and were just awaiting final permitting. What looked like a matter of weeks stretched out into months, and then over a year, but Villagran finally turned on the open sign and welcomed customers on May 1.

Villagran is more than a sit-down version of the food truck; a full menu of grilled meats and other upscale entrees join the antojitos — tacos, gorditas, burritos and enchiladas — for which customers have lined up on Alameda regardless of the weather. The setting, too, is quite an upgrade: Stone, tile and heavy wood beams give the dining room the feel of a hacienda, laid out on two floors to accommodate plenty of diners. 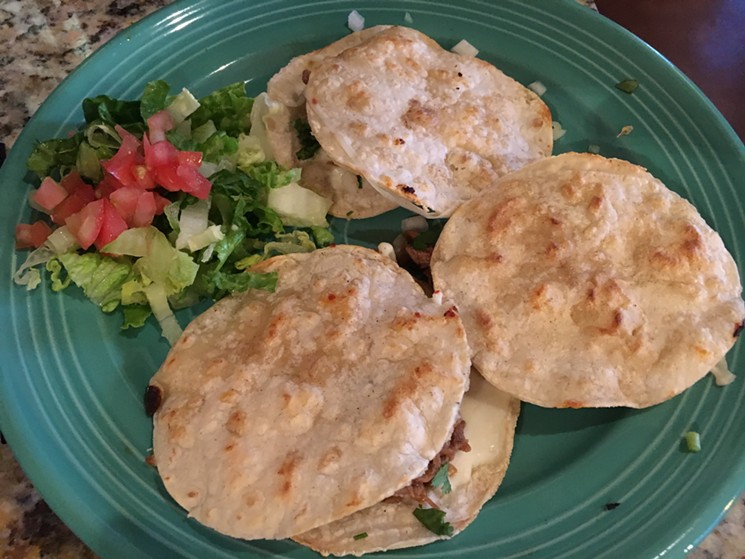 Corn-tortilla quesadillas called suegras.
Mark Antonation
Handmade tortillas, frijoles de olla and other time-intensive flourishes indicate that the menu — like the restaurant's home itself — is a labor of love. When you go, start with an order of suegras: small quesadillas made from corn tortillas and filled with a choice of meats. New York strips and T-bone steaks are offered as specials along with costillas de cordero: tender lamb chops with a smoky chile rub. There's also an impressive list of seafood, both cold (like ceviche and shrimp cocktail) and hot (think camarones al mojo de ajo).

Villagran is currently only open for dinner, with a full bar of beer, tequila, margaritas and other Mexican cocktails, but if you need lunch, you can still hit the Villa Real truck, which now parks just a little farther west on Alameda, at Decatur Street.
click to enlarge Costillas de cordero with frijoles de olla.
Mark Antonation
KEEP WESTWORD FREE... Since we started Westword, it has been defined as the free, independent voice of Denver, and we'd like to keep it that way. With local media under siege, it's more important than ever for us to rally support behind funding our local journalism. You can help by participating in our "I Support" program, allowing us to keep offering readers access to our incisive coverage of local news, food and culture with no paywalls.
Make a one-time donation today for as little as $1.