Clash of the Titans: How Great Divide Updated Its Classic IPA

One is new, one is old. Can you tell the difference? Jonathan Shikes
Tony Rau isn’t going to lie. He was a little nervous.

An experienced beer maker, Rau had spent eight years honing his craft at Odell Brewing before joining Great Divide Brewing in 2019 as the Innovation Brewer, overseeing the company’s two five-barrel pilot systems in Denver and Castle Rock. He was pretty confident in his ability, but even so, the latest project he’d been tasked with came with a little bit of pressure: revamping the recipe for Titan IPA.

The beer has a legendary history — as any titan should. Created in 2004, Titan was launched at a time when bitter IPAs were capturing beer drinkers’ attention along with their tastebuds, and it quickly became a favorite in Colorado, where there weren’t that many similar hop bombs. By 2008, Titan was being used by beer judges nationwide as an exemplar of the American IPA style — alongside California icons like Bear Republic Racer 5, AleSmith IPA, Sierra Nevada Celebration, Anderson Valley Hop Ottin’, Stone IPA and Russian River Blind Pig. 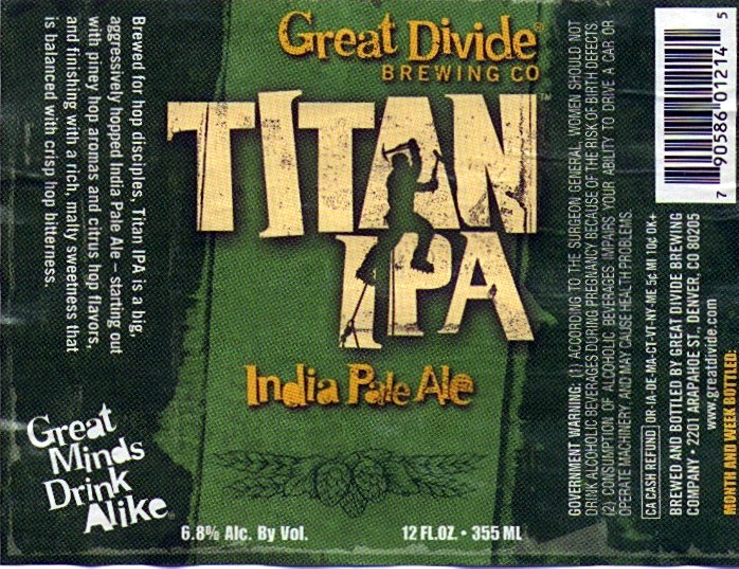 An early Titan IPA label.
Great Divide Brewing
But times have changed, and those tastebuds have turned over. These days, the craft beer-drinking public is no longer seeking palate-wrecking bitterness or the extremely piney flavors of classic American IPAs, many of them from California. They are now looking for softer, sweeter hop flavors and a gentler, smoother mouthfeel. So it was time to revamp the beer’s recipe for the first time in its sixteen-year history.

"Titan was still one of our most popular beers in the market, but it was no longer head and shoulders above everything else," explains Great Divide marketing director Matt Sandy. A number of other older craft brewers across the country have updated their own recipes in recent years for the same reasons.

“It was a fun project to work on, but it was intimidating at the start because this is a brand that has done so well for so long,” Rau adds. We didn’t want to piss off the crowd that was already drinking Titan, but we don’t want to scare away potential new drinkers, either.” 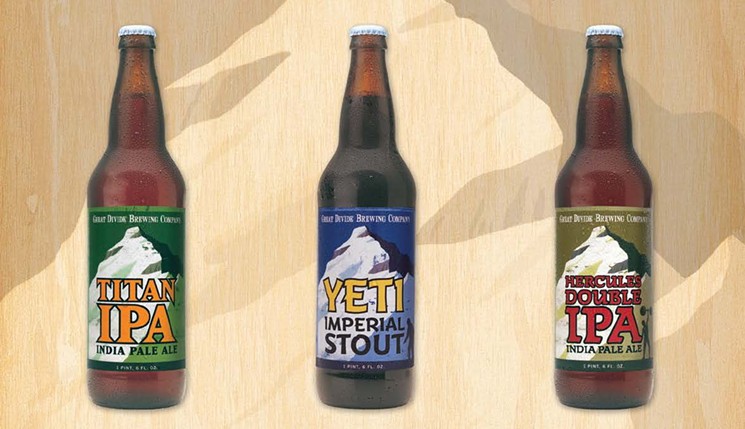 Great Divide has updated Titan's recipe as well as its artwork.
Great Divide Brewing
It was also a lot of work. “We went through eight different pilot batches,” he says, explaining that he and his team dialed back the pine by reducing the amount of Centennial and Amarillo hops that they had previously used while adding citrus and stone fruit notes with Simcoe, Mosaic and Citra hops. So although the bitterness has been decreased, the pine and citrus characteristics remain, and hints of stone fruit will be evident.

Since the old Titan also had big, sticky malt flavors, which are no longer in vogue in American-style IPAs, Rau overhauled the grain bill to create a much more delicate profile — all the while matching the color so that Titan would look the same as before. The brewery now uses five kinds of malt instead of three.

Jonathan Shikes
A Westword blind taste test involving four people found that the two beers are indeed quite different and that it was very easy to distinguish old Titan from new Titan. The heavy caramel malts were definitely gone in the new version, while there was much less bitterness. In addition, it was clear that the beer had been dry-hopped for more modern flavors and aromas associated with the Citra and Mosaic hops.

Despite the update, however, the packaging on the beer stayed exactly the same. “In the end, this is still Titan, and we felt we could spread the word about the new recipe through various marketing channels and word of mouth without having to change the art,” Sandy says. And while it’s too early to draw any conclusions about sales, “we certainly saw an uptick in Titan interest with the release of the new recipe in February.

“It was a humbling experience, but I was pretty confident it was going to be well received, and my understanding is that it has been so far,” says Rau, who is wrapping up his tenure with Great Divide. “We took a great beer and made it into an awesome beer. I stand behind it, and hopefully people will think it's as good as I do.”
KEEP WESTWORD FREE... Since we started Westword, it has been defined as the free, independent voice of Denver, and we'd like to keep it that way. With local media under siege, it's more important than ever for us to rally support behind funding our local journalism. You can help by participating in our "I Support" program, allowing us to keep offering readers access to our incisive coverage of local news, food and culture with no paywalls.
Make a one-time donation today for as little as $1.