Happy Hour for You and Your Dog From Carboy Winery 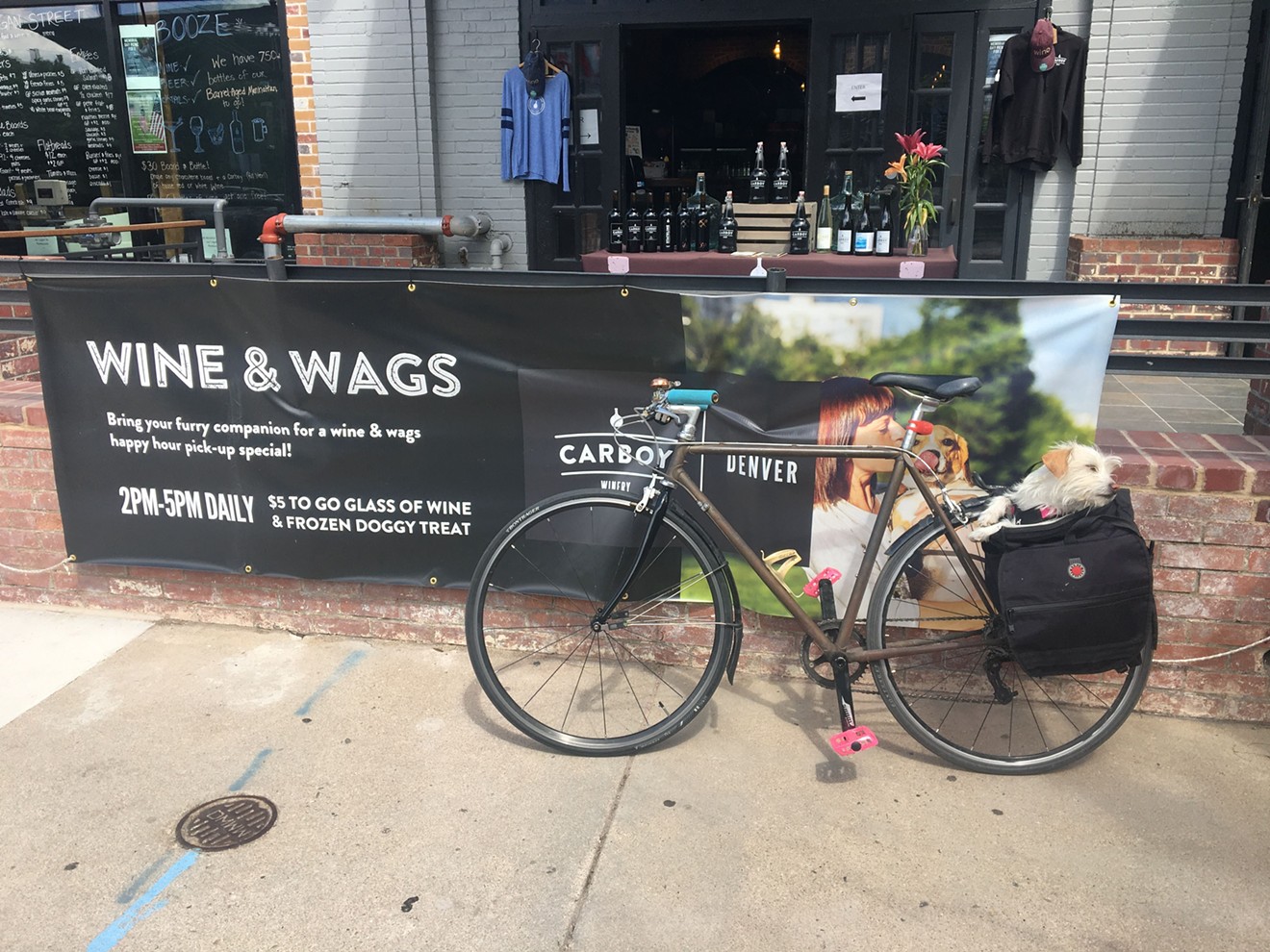 Pickles gets a ride to the Carboy Winery. Leigh Chavez Bush
Like many Coloradans, if there's an opportunity to drink while also bringing the pup along, I’m there. But with Denver just barely on the road to opening up some of its restaurant spaces, thoughts such as where to drink with my dog had yet to cross my mind...until I passed by Carboy Winery in the Congress Park neighborhood the other day. Outside Carboy's taproom and tasting room, a sign boasts “WINE & WAGS: Bring your furry companion for a wine & wags happy hour pick-up special.” Not only will the urban winery give your dog a homemade frozen treat, but Carboy offers $5 to-go glasses of wine to enjoy alongside your canine. Well, Carboy, you’ve got yourself a deal.

I went straight home and asked Pickles, my canine companion, how she felt about frozen treats, and she agreed it would be worth riding in my bike’s panier if I fulfill the promise. Carboy has a number of curbside pick-up offerings, including a board-and-bottle takeout special that, for $30 (plus $7 if you need to buy a refillable carafe), will get you a charcuterie board of your choice and a liter of house white or red. The wine bar is also giving away one free bottle when you buy a sixer, or two if you order a case. Since I knew my pup was getting an edible treat, I decided I needed something to go with my $5 wine, so I looked to the board-and-bottle specials, settling on the Andre the Giant combo, described as “a selection of domestic and imported charcuterie, preserves, pickles,” which, given the two other options  — the Summer of 92 (all cheese, no meat) and the Red Rocker (two cheeses and two meats) — implied that it would be all meats and no cheeses. 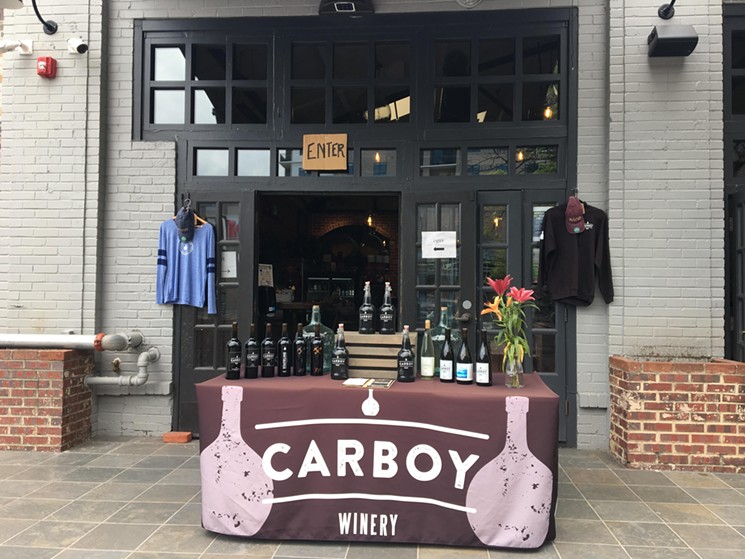 Carboy was set up for easy takeout on my visit, but is now also seating guests at safe distances.
Leigh Chavez Bush
With Pickles packed safely in my saddlebag, my roommate and I rode from the Highland neighborhood to Carboy, a lovely journey along the Cherry Creek path. The winery has set up a U-shaped path for customers to pass through the airy tasting room in one direction. (Just don't forget your ID, like I did!) While solving my own ID snafu, the generous staff gave Pickles her homemade frozen treat (which didn't last long). Insider secret: These peanut butter, yogurt and banana treats are a tasty human-friendly snack, too! 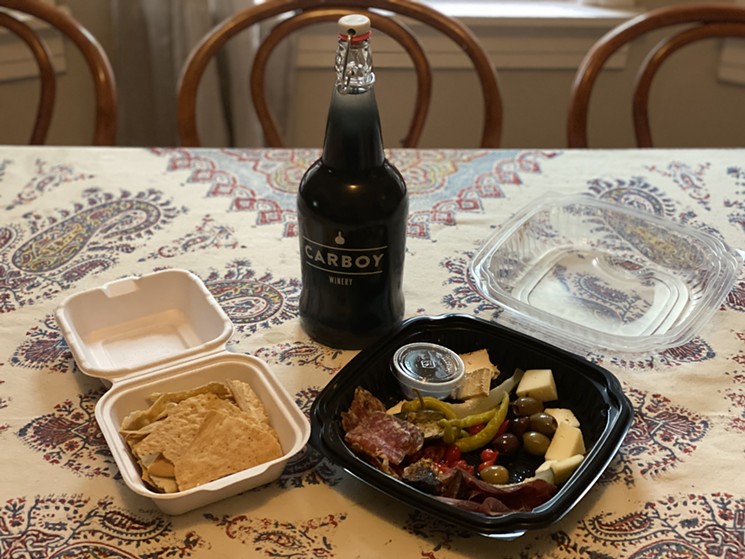 At home with the goods.
Leigh Chavez Bush
Finally, with a healthy pour of $5 red, a liter of house white and a charcuterie platter in hand, our happy hour commenced at home. We wasted no time setting out our spread, which turned out to include two cheeses, two meats and several accompaniments. Unfortunately, we had received the wrong order (this was the Red Rocker), but at least the sweet blueberry compote and dried figs paired with the soft triple-cream Brie (which got a little messy on our bike ride home), and the juicy, pickled Sweety Drop peppers alongside the semi-hard Manchego-esque cheese were such a delight that it was everything we could do to make it last while we sipped our wine. Carboy’s house wines are tasty, if basic: light on the palate, neither too fruit- nor too mineral-forward, but refreshing on a warm day.

Pickles had only one complaint: We had nothing else for her. Not to worry, Pickles: We'll be back soon.

Carboy has two locations in the metro area (in addition to one in Breckenridge). My takeout order came from the newer winery at 400 East Seventh Avenue, but there's also a Littleton location at 6885 South Santa Fe Drive (though that one is not doing the Wine & Wags special). The Wine & Wags special runs from 2 to 5 p.m. daily until further notice. Both are now also open for socially distanced dining, so check the Carboy Winery website for details.
KEEP WESTWORD FREE... Since we started Westword, it has been defined as the free, independent voice of Denver, and we'd like to keep it that way. With local media under siege, it's more important than ever for us to rally support behind funding our local journalism. You can help by participating in our "I Support" program, allowing us to keep offering readers access to our incisive coverage of local news, food and culture with no paywalls.
Make a one-time donation today for as little as $1.