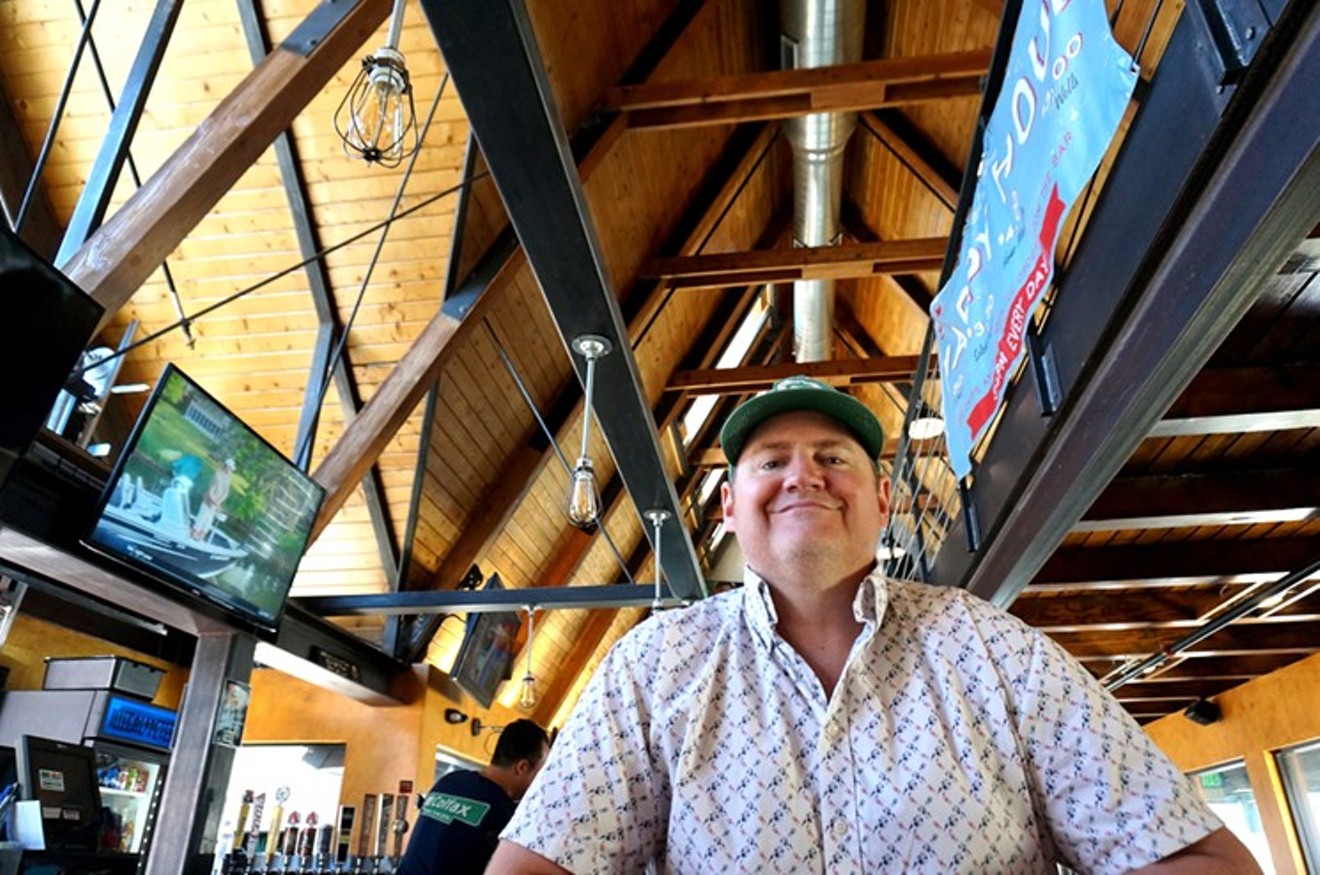 Pete Turner in his restaurant on East Colfax Avenue. Mark Antonation
Illegal Pete's got its start in Boulder back in 1995, when Pete Turner, Littleton native and recent University of Colorado grad, decided to open an eatery based on those big Mission burritos he'd tried when visiting San Francisco — the same burritos that inspired Steve Ells to open Chipotle in Denver in 1993.

Today, Turner has nine restaurants in Colorado, with two more joining the lineup soon in Denver. His company will mark its 25th anniversary next year, with plans not just for a big celebration here, but for expanding Illegal Pete's reach outside of the state, beyond the two outlets now open in Arizona.

But it seems that every time Illegal Pete's steps outside of Colorado, it gets into trouble.

And right now, the company is suing the Delaware Secretary of State after corporate filings were rejected on the grounds that the company's name allegedly has "offensive connotations."

Turner heard the same thing back in 2014, when he decided to open a place in Tucson, by the University of Arizona; activists there claimed the Illegal Pete's name mocked undocumented immigrants.

But that's not the case, Turner argued then, and he's arguing it again now.

Turner named his first restaurant as an homage to his father, Pete Turner Sr., a "good, old-fashioned hell-raiser" who had terminal cancer when he helped his son start the company and passed away in 1997. "The name had no racial connotations then, and it has no connotations now," the company says in a release explaining the lawsuit. "In our current political times, divided and filled with racial tension, our name has been unwittingly rolled into a larger conversation about race, the United States, who belongs here and if a human being should ever be referred to as 'illegal.'"

The conversation about the Illegal Pete's name erupted again after Turner explored restructuring his S corporation as an LLC in Delaware "for financing purposes," he explains, even though as a longtime Colorado company, it "bothered me to think about incorporating in Delaware."

Courtesy Illegal Petes
It bothered him more last fall when Delaware officials got back in touch regarding his filing and essentially said, "We're not cool with the name," he recalls. "Are you kidding me?"

He was offered the option of incorporating as "IP LLC, doing business as Illegal Pete's," but instead decided to ask the Delaware Secretary of State to take another look. When that office doubled down on its opinion, Turner contacted his lawyers and decided to file a lawsuit protest "in exactly the spirit behind the name, sticking up for the First Amendment, against the arbitrary use of power."

Turner's done it before. After nineteen years in business without a complaint about the rabble-rousing name, controversy erupted when he looked at expanding to Tucson. "I did a lot of soul-searching," he recalls. He talked to his employees, including two "key dudes" on the team who were immigrants; he attended a public forum in Fort Collins, when Illegal Pete's opened its first spot in that city in the midst of the furor. "Through all of this, I've come to the conclusion: If people choose to take it that way, that's kind of on them," Turner says. "At this point, it's very clear."

And so he decided to send a very clear message to Delaware, in the form of a free-speech lawsuit. "This is more important to me than the presumption that we incorporate in another state," he says.

As the company explains in a release: "The word 'illegal' in our name is a reference to the countercultural, to the rebellious, to the very picture of challenging authority that the restaurants were founded upon. It's in this spirit that we challenge the decision made by Delaware officials to refuse to incorporate because of our name. The word 'illegal' has usages that extend far beyond using it as a slur, and these different and endless usages are a vital part of our language and society. If we retract every instance of the word "illegal," it won't solve the issues our country has with being fearful of others where we should be welcoming. If we removed every instance of the word 'illegal,' we wouldn't be able to talk about the regulations we build our society around."

Or as Turner says: "If Dad were still around, he'd say, 'Fuck ’em, this is wrong. You know your truth.'"

Turner does. Pushing back when it's the right time to do so is the "spirit of our brand," he says.

That brand is growing, too. Over the next four years, Turner plans to more than double the number of restaurants, growing from 11 to 25; he's eying Flagstaff and Phoenix in addition to his current stores in Tempe and Tucson.

But he's not ignoring Colorado. In addition to adding stores here, he's adding services for employees, pushing for a living wage, offering special training, supporting arts programs. He has "really cool stuff" in mind for the Illegal Pete's 25th anniversary, expanding the support for the arts that is already a hallmark of Illegal Pete's.

"We see our stakeholders as our crew, customers and community," he concludes.

There's no law against that.
KEEP WESTWORD FREE... Since we started Westword, it has been defined as the free, independent voice of Denver, and we'd like to keep it that way. With local media under siege, it's more important than ever for us to rally support behind funding our local journalism. You can help by participating in our "I Support" program, allowing us to keep offering readers access to our incisive coverage of local news, food and culture with no paywalls.
Make a one-time donation today for as little as $1.