In Search of the Bigfoot of Ethnic Cuisine: Georgian Khachapuri 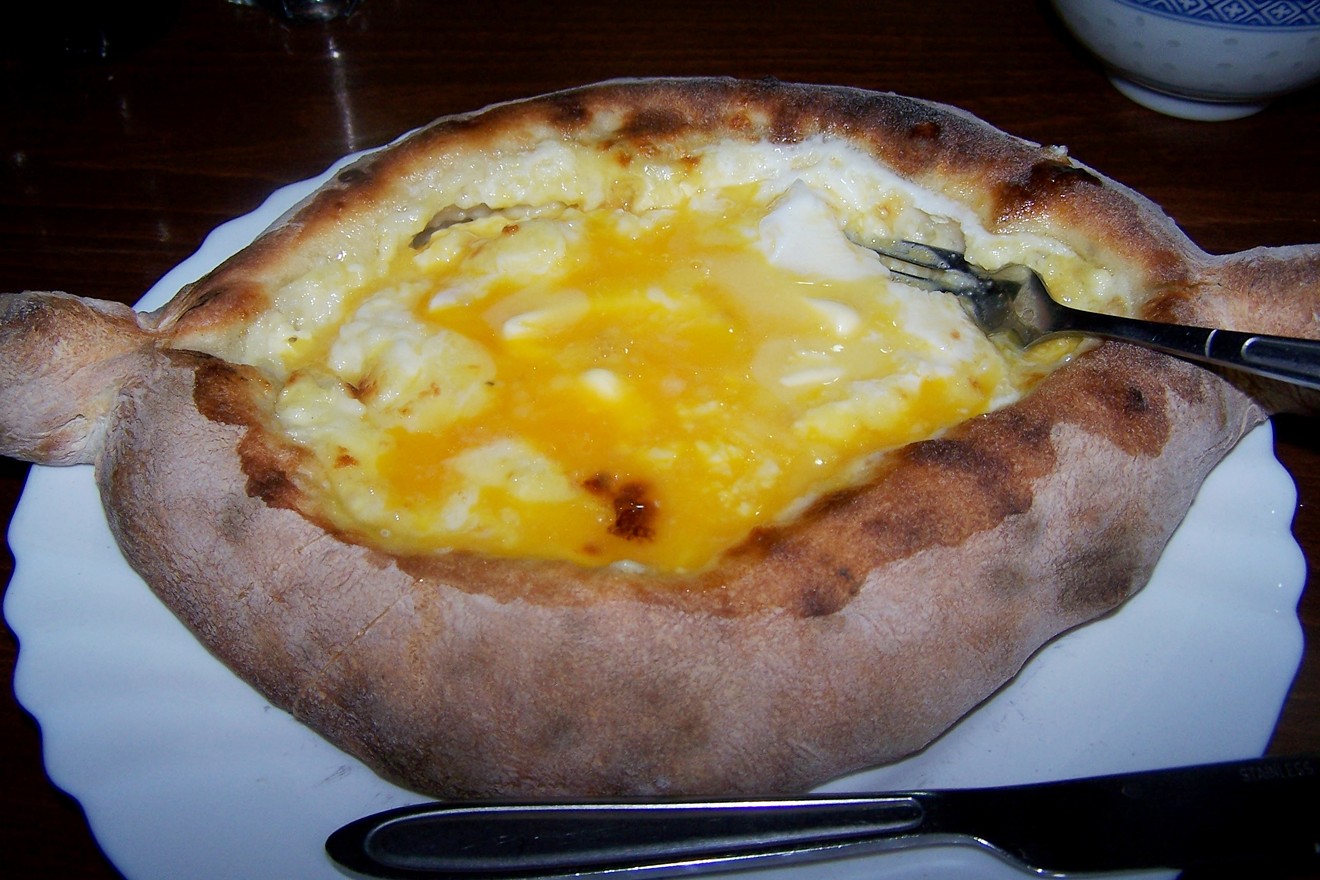 No, you can't find this cheesy Georgian dish called khachapuri in Denver. Flickr/Rugbyxm

Another photo of a pillowy bread pocket overflowing with molten cheese, butter and egg yolk pops up on my Instagram feed; the dish is khachapuri, common in Georgia (the country, not the state) but impossible to find in Colorado outside of home kitchens. For seekers of rare food and international cuisine, khachapuri is one of only a few dishes that meet all the requirements of a culinary unicorn: rarity, craveability and — of utmost importance — photo-worthiness. After all, what good is seeking out and chowing down on some of the world's best and hardest-to-find food if you can't share it on social media?

Denver deserves credit as a destination for Vietnamese and Ethiopian cuisine, since multiple generations of immigrants from these two countries have added to the depth and breadth of menu options here. For example, you can find regional variations of the raw-beef dish called kitfo at Megenagna in Aurora, whereas in other cities you might only track down one version of the Ethiopian mainstay, and it would be sautéed to cater to American tastes. And you can enjoy several types of unusual Vietnamese steamed dumplings (such as banh beo, banh loc, banh nam and banh ram) at Denver Pho.

But Georgian food, and khachapuri in particular, remains elusive in metro Denver.  Unlike those early Bigfoot photos, intentionally grainy or blurred, images of khachapuri on cooking websites, travel blogs and Instagram are vivid and tempting. Adventurous eaters in such East Coast cities as Boston, New York City and Washington, D.C., gloat over their trophy shots, while we can only drool and dream. So I keep my eyes and ears open for any sign that Sasquatch — er, khachapuri — might show up somewhere in town. 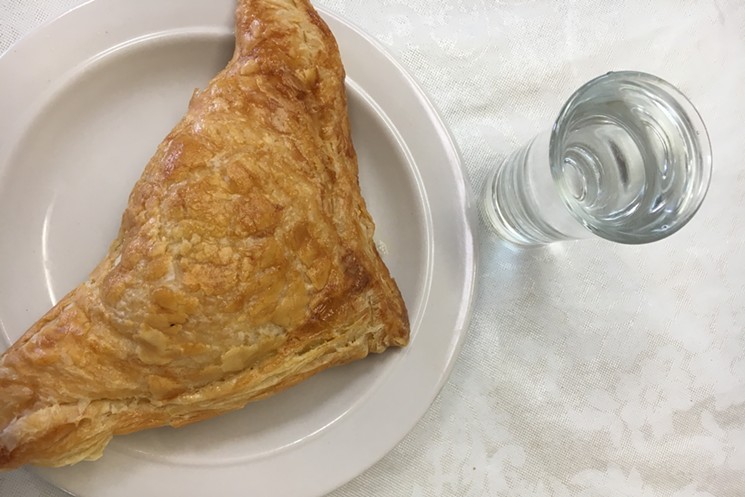 This wasn't the khachapuri I was expecting, but the vodka helped take the edge off the disappointment.
Mark Antonation
And like a cryptozoologist holed up in a blind awaiting a sighting, I finally got a glimpse. A new Russian eatery called — simply and evocatively — Home Made Food recently opened in the former home of David's Kebab House at 970 South Oneida Street. David's was known for specialties from Russia and other countries that were previously part of the Soviet Union, and I hoped for something similar at the new establishment...if not more.

And sure enough, khachapuri showed up on the menu at Home Made Food, along with Ukrainian borscht, Russian pelmeni, a variety of kebabs and other Slavic and Central Asian dishes.The entire menu is written in Cyrillic, with English translations, so pelmeni appear as "dumplings" and the khachapuri includes "puff pastry" in the description, which had me worried that it was something other than the yeast-risen cheesy bread I was expecting. (Oddly, the restaurant's online menu is a YouTube video.)

Home Made Food doesn't look much different than David's; there's a deli case and cash register on the left and a tiny dining room with three or four tables on the right. I was the only customer in for a late lunch on a recent weekday, but while I was there, several catering orders went out the door: heavy stock pots filled with soups and steam trays loaded onto wheeled carts. Like David's did, Home Made Food has a liquor license, so you can drink a Russian beer or down shots of vodka with your meal. 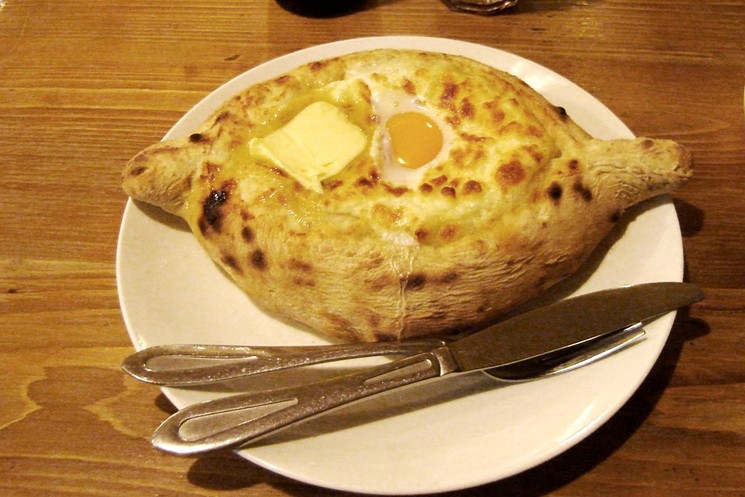 You can travel to Georgia for adjaruli khachapuri, or to larger cities in the U.S., but we have yet to spot it in Denver.
Flickr/Stefan Krasowski
And I needed those shots when the kitchen door opened and a server approached with the khachapuri. The white plate held a pretty but otherwise nondescript triangular turnover made from puff pastry, as the menu had indicated. Cutting into it revealed a filling of crumbly cheese similar to feta or some other goat cheese. At only $2.50, it wasn't unreasonably priced, but it was far from what I was expecting.

Where was the canoe-shaped pie with high walls designed to contain a lake of cheese and yolk in the center? Where was the golden-baked beauty oozing butter over its rolled edges? I was surely the brunt of some elaborate hoax.

As it turns out, though, Home Made Food was within bounds calling its version of the dish khachapuri: Georgia is home to many distinct regions, and each has its own style of the dish. Some use a blend of cheeses to create an almost fondue-like slurry, while others add ground meat, sautéed greens or fresh herbs. What I was searching for is known as adjaruli khachapuri, the most common type sold by street vendors and restaurants in the country's largest cities. What I got was khachapuri penovani, a style common in more remote areas.

So maybe my find was an even rarer version of Georgia's national dish. But it just wasn't as breathtaking or, despite the restaurant's name, as homemade (my order had the precise and even shape and texture of a pre-made product) as what I've been searching for.

And so I will continue to stalk the mythical Denver khachapuri, camera in hand, ready to snap the perfect photo of the beast in its full, cheesy glory — and then devour it.

Have you spotted khachapuri or other rare culinary treasures? Let us know in the comments or by sending an email to [email protected].
KEEP WESTWORD FREE... Since we started Westword, it has been defined as the free, independent voice of Denver, and we'd like to keep it that way. With local media under siege, it's more important than ever for us to rally support behind funding our local journalism. You can help by participating in our "I Support" program, allowing us to keep offering readers access to our incisive coverage of local news, food and culture with no paywalls.
Make a one-time donation today for as little as $1.