Next month, Andrew Moore and Ben Gettinger plan to open the Intrepid Sojourner Beer Project, a brewery that will specialize in "internationally inspired twists on traditional beer styles." That means the Belgian-style tripel will be made with lavender, the stout will be brewed with Turkish coffee and the amber will be made with, yes, garlic.

"Not a lot of brewers use adjuncts like these," says Moore, who was a archaeologist working in Turkey, Jordan and Greece before moving to Colorado and digging into a job as a brewer at 105 West Brewing in Castle Rock. It's that international background that will inspire Moore's recipes. Other adjuncts and ingredients he plans to use include fresh basil from Italy, ripe Chinese pears, shagbark hickory bark, cardamom and sweet orange peel.

Gettinger, an options trader, and Moore met much closer to home, however — in Indiana, where their mothers, former sorority sisters at Indiana University, put them in touch. Moore was looking for help starting a brewery in Colorado, while Gettinger wanted to put his background in economics to use in something entrepreneurial.

"It was exactly what I was looking for," says Gettinger. 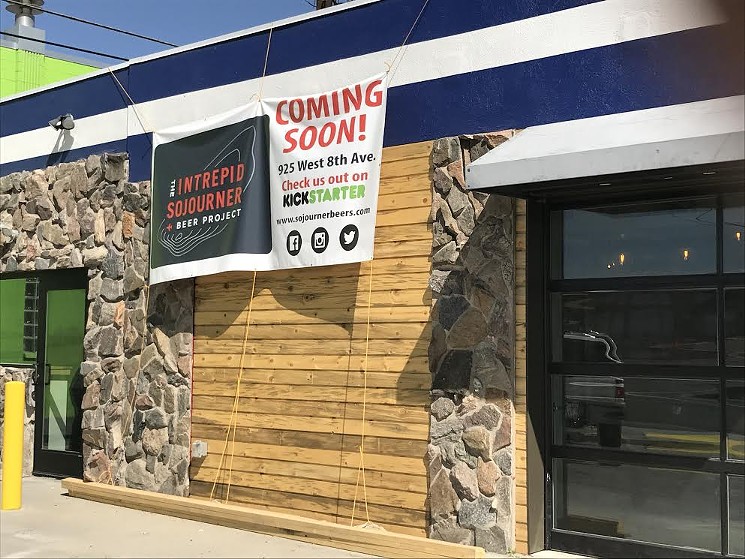 Jonathan Shikes
After considering locations outside of Denver, the two found a 2,200-square-foot former laundromat at 925 West Eighth Avenue — familiar to commuters along the busy corridor because of its bright shade of pink — in the Art District on Santa Fe, something that was important to Moore, who has an arts background. As head brewer, Moore has a seven-barrel brewing system and plans to open with ten to twelve beers on tap. The brewery is located just a block from Renegade Brewing.

Originally called Sojourner Brewing — to reflect Moore's travels — Moore and Gettinger changed the name to avoid any possible trademark problems. "They told us to add an adjective, but there aren't a lot of good adjectives," Gettinger jokes. "So we decided to double down on archaic, unpronounceable words."

Jonathan Shikes
With its location and unusual-beer theme, Gettinger says Intrepid Sojourner should stand out, despite the fact that it is one of twelve to fourteen new breweries opening in Denver in 2017. "We talked about going somewhere else, but ultimately we decided that most of the taprooms in Denver are still always full."

To complete the sojourning theme, the bar in the brewery will showcase maps of the United States under the glass, while a wall of vintage suitcases will serve as shelves. A large world map will also decorate the wall — "so you can visualize where the inspiration for the beers comes from," Moore says.

Moore and Gettinger are aiming for a late May opening, though it may not be until June. They are also currently running a Kickstarter campaign to help them build out the taproom: "Want to grab a beer with friends after another epic Colorado weekend? Need a cozy spot to plan your next adventure? Simply want to daydream about the world's exotic places? Want to meet a world-class explorer? We want to provide you with a home base," the Kickstarter reads. "Whether you travel on foot with a well worn tent, or prefer a first-class airplane seat, you are part of the community at The Intrepid Sojourner Beer Project. Most of the mountains, rivers, passes, lands, and great landmarks of this world have been named, so leave your mark on our taproom. You can sponsor tables and chairs, name tanks, and even work towards brewing your own at a commercial level. Help us design the taproom experience you're looking forward to and earn our undying gratitude as well as lots of cool stuff."