The 'cue at Jabo's is based on family recipes from Louisiana. Molly Martin
Denver's dining scene is making a big comeback — and we're hungering to go out. With so many new ventures and old favorites to visit, the choices can be overwhelming. So we're serving up Short Stop, with recommendations for things that should definitely be on your culinary short list. This week, save room for dessert at Jabo's Bar-Be-Q. 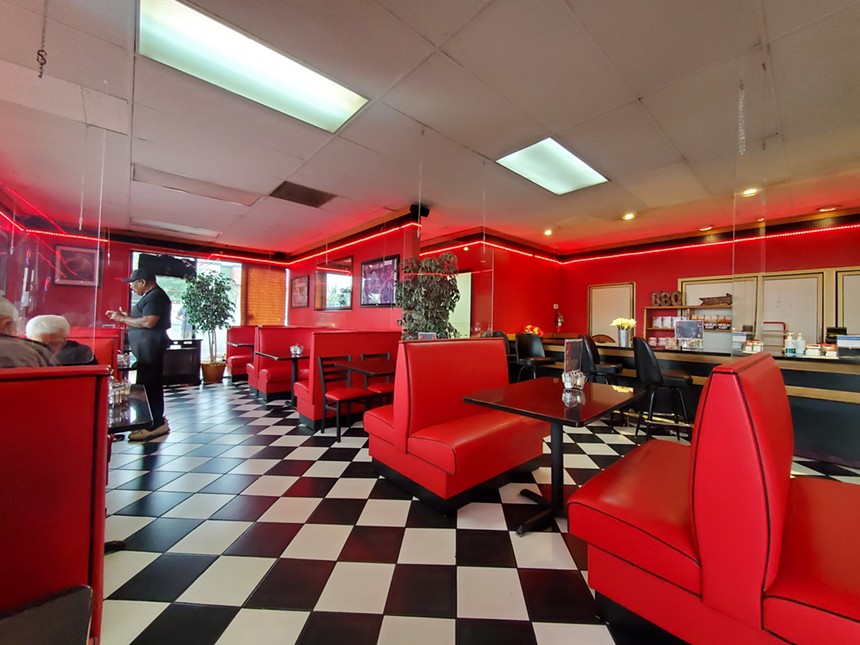 Dwight "Jabo" Lawson gives new customers a rundown of his sauces.
Molly Martin
About the place: Jabo's Bar-Be-Q got its start as a trailer before moving into its current home in a strip mall near the DTC in 2003. Ever since, owner Dwight "Jabo" Lawson has continued to share his passion for Louisiana-style pit-smoked barbecue with guests who settle into bright-red booths for more than a meal.

A visit to Jabo's is an experience rooted in old-school hospitality. On my first visit sometime in the mid-2000s, Lawson himself greeted me and shared some of his background. His late father, Jerome, was the original "Jabo," a nickname now carried on by his son, whose food is an homage to his dad's legacy — the elder Jabo began barbecuing in 1950 using a brick fire pit that he built himself in McLoud, Oklahoma.

When I lived and worked in south Denver, I visited Jabo's often — at the time, it was one of just a few locally owned spots in the area. Recently, I went back and was greeted as warmly by Lawson as I had been the very first time I went in.

The sauce tasting is one of the highlights of visiting Jabo's.
Molly Martin
His first question to every guest is whether it's their first visit. If it is, Lawson starts the experience with a sauce tasting. Sauces are no afterthought here; they're one of this pitmaster's passions, and he makes sure everyone's meal comes with the perfect pick for their palate — by bringing out an actual palette with six sauces to try.

Over the years, he's created well over 100 flavors. These days, the options include a conventional tomato-based hickory-smoked sauce, hickory mustard, mesquite, a vinegar-based sauce, mango and a sauce of the month. Lawson walks guests through a mild version of each one, though for the actual meal, any sauce can be made spicier, with levels ranging from medium all the way up to XXXX hot.

The sauces are available on everything from brisket and spicy Polish hot links to spare ribs, rib tips and chicken. My go-to is the Carolina pulled-pork sandwich ($14.95), a half-pound of meat piled on a giant, soft bun with slaw on top. Sides like beer-battered fries ($3.75) and a newer offering, a half-pound of creamy mac and cheese ($7.50), come separately, but there are also lunch specials and dinner combos that include sides as well as a dessert that's more than worth saving room for.

Don't skip dessert at Jabo's.
Molly Martin
What you're eating: The Utah Sconut. The only dessert on the menu at Jabo's, the Sconut ($2.50) is a contribution from Lawson's wife, Susan, who has decades of experience in hospitality and deep family roots in Utah. While a scone is typically a dense quick bread, often served with tea or coffee for breakfast, a Utah scone is a deep-fried delight.

The version here is one that's been perfected over many years; Jabo's even sells its own Sconut mix so that you can make them at home. But nothing beats biting into one at the end of a meal.

The puffy pastry is pretty simple on its own, but its pillowy exterior is elevated with a generous pour of honey butter over the top. It's small, just a few inches in diameter, but it's the kind of treat you should savor, not scarf down. And after a filling meal of barbecue, it's just the right sweet note to end on, along with a friendly smile and wave from Lawson.
KEEP WESTWORD FREE... Since we started Westword, it has been defined as the free, independent voice of Denver, and we'd like to keep it that way. With local media under siege, it's more important than ever for us to rally support behind funding our local journalism. You can help by participating in our "I Support" program, allowing us to keep offering readers access to our incisive coverage of local news, food and culture with no paywalls.
Make a one-time donation today for as little as $1.