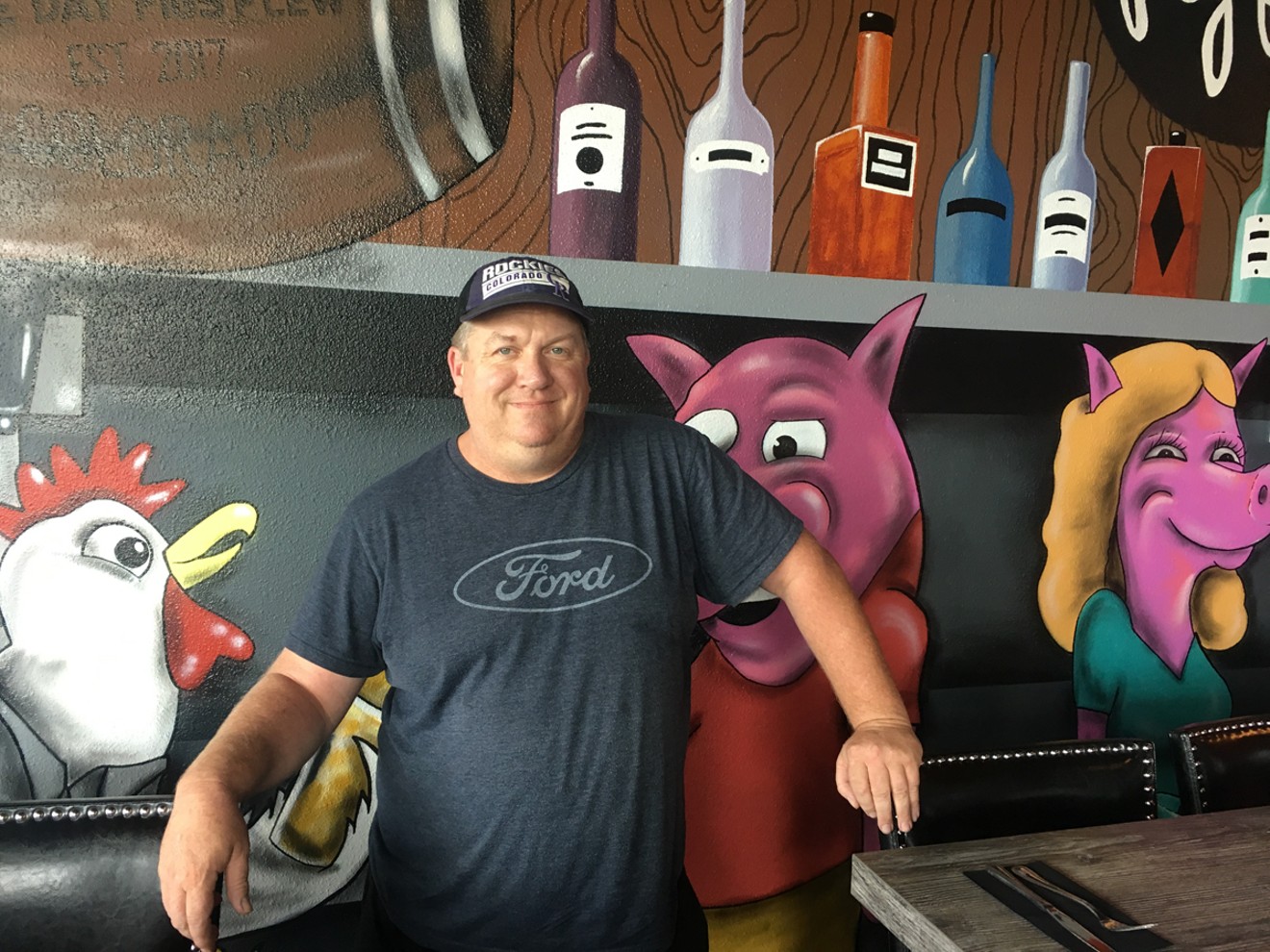 Jamie Shotton is building an empire in the western suburbs. Laura Shunk
Jamie Shotton grew up in the western suburbs of Denver, where he learned to cook while helping his mother in the kitchen. After launching his career in chain restaurants — and learning the valuable management and financial lessons imparted at those places — he turned his attention to fine-dining technique. Shotton and his wife now own the catering company A Perfect Bite and a growing group of restaurants that serve the communities where he was raised. In this interview, he talks about their forthcoming restaurant in Olde Town Arvada, why he opened places in Lakewood and Littleton, and the wisdom he’s gained from decades in the business.

Westword: You and your wife opened a catering business before you got into the restaurant game. Talk about how your career has evolved.

Jamie Shotton: I worked for a big company right off the bat — Brinker International, Grady’s. I started as a prep cook, soon learned the line, and became an assistant kitchen manager. I was eventually part of their opening team. It was a really good experience — it was all about numbers and percentages, and very corporate. I moved to Minnesota in ’93. I worked for a fine-dining place called Iven’s on the Bay and learned a lot about the actual art of cooking. I came back to Colorado a few years later, and I was a butcher at the Fort for a little while. Then I worked for Jackson’s Sports Bar, which was fun, if not the best food in the world.

After that I worked for a catering company — Catering by Design — where I met my wife. That was a learning experience; I’d never catered. But I decided from there that I could probably start a catering company. My wife was a salesperson, and we started catering events out of a commissary. We quickly grew out of our commissary and had to move into a commercial kitchen. I met a gentleman that I private-cheffed for, and he helped us invest and buy a building [in Lakewood], which became an event and wedding center with a kitchen for off-premise and on-premise catering. In 2014 we opened Westrail Tap & Grill up the street. We thought there was a need for a local tap and grill that was not necessarily completely from scratch, but a lot from scratch, with a good craft-beer selection to compete with Old Chicago. And then in April this year, we opened Flying Pig Burger Co. [in Littleton]. We were very busy right off the bat; we had a lot of momentum through social media, and there’s a lack of family restaurants here. 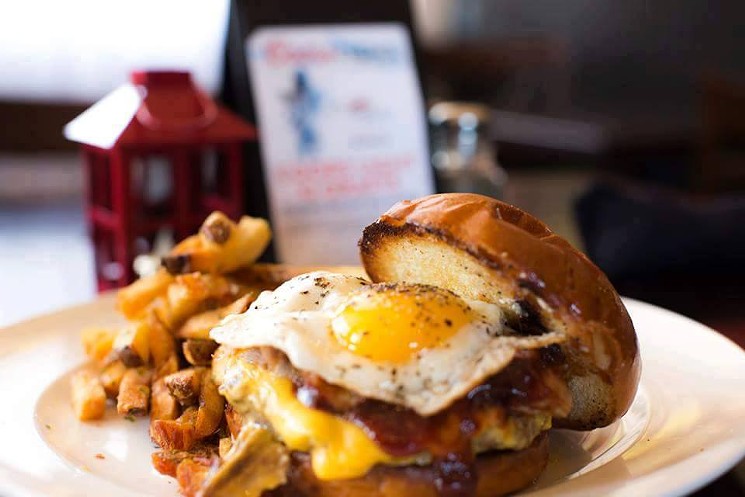 Flying Pig via Facebook
What lessons stick with you from catering and then opening restaurants of your own?

Westrail was our first restaurant; we wanted to do this and that, but we had to tone it back for business. We learned that the demographics dictate what you’ll serve. With the burger company, everything is a little bit better from the business side. We sell a lot of draft beer and burgers. [From catering], I learned a lot of different cuisines and flavors; I worked for chef who talked to me about precision and cooking in layers. In catering, you typically will do a small-portion tasting for people, and it’s precise and beautiful. But at the event, you’re cooking for 300 people, and it still needs to be precise. I learned a lot about how to achieve that in a big-party atmosphere — what foods can be cooked and held, what needs to be cooked on site, timing and how to get the best possible food product. It made me aware of a lot of the finer things in cooking.

You seem to be amassing a bit of a western-suburban restaurant empire: After locations in Lakewood and Littleton, you’re getting ready to open something in Arvada?

We’re going into the old Eggshell space with Flying Pig Bacon Co. We’ll do a lot with bacon, pork, bacon-wrapped meatloaf, a ramen dish with pork two ways, pork-belly bao buns, a pulled-pork-and-pimento-cheese egg roll. It’ll be a mix of Southern and Asian. We’ll have unique burgers and traditional items, and we’ll be family-friendly as well. We plan to be involved in the community — we’re doing Taste of Arvada this month — and we’ll support the teams and high schools. We know there are other restaurants in Olde Town, and we want to be part of the community. We don’t want to clash; we want to be friends with everyone. There’s room for Arvada to grow — it’s been growing for the last five years.

It’s interesting that even as you open successful restaurants, you don’t seem interested in expanding particular concepts. Why not just plant a second location of the burger company in Olde Town?

We want to make some noise. The burger company is great down here because there’s nothing around us, but up there, there’s more excitement. Larimer Associates owns the Griff’s property, so I’m sure they’re going to do something. You have Fuzzy’s Tacos, Denver Beer Co., other things like the ice cream guy and Schoolhouse, which is quirky. Homegrown is Colorado-focused. All the restaurants have this certain niche. We didn’t want to be just another restaurant. We could do a burger company up there, and we may do Flying Pig again somewhere else, but in that area, [something new] will work. We will adapt if it doesn’t work.

I’ve heard you say before that it’s exciting to see Denver’s booming restaurant industry spill out into the suburbs, and that seems to be the impetus for the restaurants you’re opening. How are we seeing this growth spread outward?

It seems like anywhere the new light rail is going is expanding commerce. That’s typical in big cities. Some areas are going to take time — West Colfax is still coming along. We’re excited to get into Arvada because it’s established; all the businesses and business groups are settled and situated. It’s an old neighborhood that’s changing, and we love to be part of that. A lot of the places we go in LoHi or Uptown, we think, it’d be cool if we can get some of this experience out here [in the western suburbs]: bacon-wrapped dates stuffed with chorizo and smoked Gouda, or a poke bowl with sashimi-grade tuna. We want to do things a little better. [At Flying Pig], burgers rule the day, and the meat we get is from Boulder Valley, the bread from a local bakery. We love being in the restaurant business — it’s fun. This is the most exciting time in Denver for restaurants.

Flying Pig via Facebook
You’ve been here since you were a kid — any favorite restaurants from your youth?

Chubby’s original, back in the day. There was this chain called Garcia’s; it was Mexican. The Du Beaus out in Aurora — that was awesome. I love brunch, and we used to go there on my birthday. There were carving stations, waffles, omelets.

Any words of wisdom for operators just getting started?

Everything’s a lot harder than you think. The financial part of it is hard. Everyone has this idea of business owners, but we live in a rental house, drive used cars, and I wear chef pants and T-shirts. We have a good life, but we’re not rich. With the catering company, we thought, oh, this will be great in three or four years, but it’s been eleven years of work. But I wouldn’t have it any other way. And you have to be thick-skinned. There are lot of people out there who don’t like you, and people will try to cut you down. Take what you can and filter through it. We want everyone to be happy, but we’re going to drop the ball sometimes — it is what it is. You can’t take everything so personally.

How about a shift drink?

Titan IPA or Casamigos Añejo. Any añejo; I like tequila.

What’s always in your fridge or pantry?