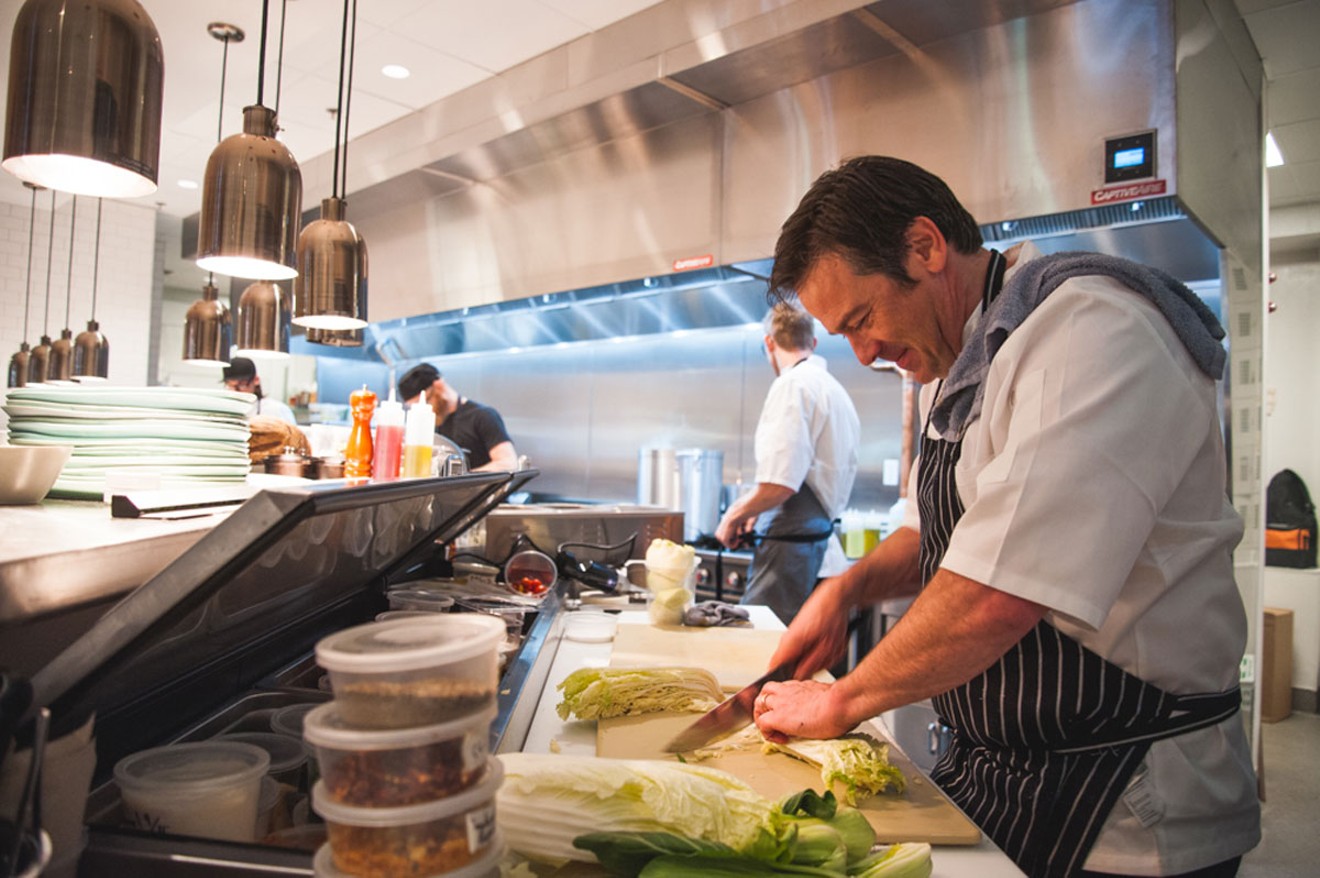 John Broening in the kitchen at Avelina. Lucy Beaugard
John Broening has been a torchbearer for Denver’s culinary community for the better part of the last two decades. In addition to stints at Brasserie Rouge, Le Grand Bistro and Argyll, he and his wife, pastry maven Yasmin Lozada-Hissom, worked at Duo, then partnered with Duo owners Stephanie Bonin and Keith Arnold to open Olivea (Broening and Lozada-Hissom were eventually bought out); they went on to open Spuntino, where they turned out ingredient-forward menus borrowing heavily from Mediterranean cuisines. (Broening and Lozada-Hissom have since sold that spot.) Broening also penned occasional columns for the Denver Post, exhibiting his scholarly views on cuisine, ingredients and cooking. In 2016, he and his wife took control of the kitchen at Avelina, where they’re putting out some of the best dishes in the Mile High City.

We recently chatted with Broening about how his mother’s handle on seasoning helped form his palate, why Denver’s culinary scene can only evolve as fast as local farmers do, and the importance of restraint when it comes to putting dishes together.

Westword: Talk a bit about how Avelina came together.

John Broening: I was put in touch by a headhunter with Kevin and Stacey Jennings, who own Urban Food Group out of North Carolina. They had the space, the kitchen was mostly designed, and they had an Italian concept in mind. I would have been happy doing that; I love Italian food. But the more we thought about it, the more we thought this area was starting to get saturated with Italian concepts. I thought a lot about Colorado and Denver food. If you’d talked to me ten years ago, I would have been more of a purist — I thought it was important to find one cuisine and stick to it. But now, I thought, Colorado doesn’t really have a strong food tradition the way Louisiana, New England or Santa Fe does, and that isn’t necessarily a bad thing. With tradition comes a certain amount of constriction. Not having a food tradition can be liberating, if you apply the discipline and technique to food. So we thought New American. It’s a broad umbrella — you have the option of tailoring your own menu using all of these various components. If you want entirely small plates, you can do that. It’s not revolutionary. But once we decided on that, it all came together pretty quickly. My wife [Yasmin Lozada-Hissom] and I had the luxury to really test out the dishes thoroughly. I found this chicken in Bennett, Colorado, from someone who raises barnyard chickens the way they were raised 75 years ago. We’re doing a perfect marinade [and] cooking technique, and a plate that really shows it off.

Inside Avelina.
Westword
You’ve had a storied career here in Denver. Walk me through how you got into this industry in the first place.

I had a liberal-arts degree. I didn’t really know what I wanted to do, and I didn’t do that well in school. I picked up a book: New American Classics, by Jeremiah Tower. He trained as an architect. He had a Wagnerian-sized ego. Before this was a respectable profession, he was convinced of what he was doing. This book was full of colorful photographs, and the food drew on Southwestern, French and old American cuisine. Reading that helped me make the leap. I worked in a couple of restaurants in Philadelphia. We made superb food, even though there were bell peppers on everything. I went to New York, to Peter Kump’s New York Cooking School. I was on work study, so I assisted visiting chefs and teachers, and I got to see things two or three times. I worked at good restaurants in New York and then moved to San Francisco.

I grew up in Europe, and I’d lived in France for five years. That’s what my mother cooked at home. I had a lot of schooling in the language, as well. [During a break from San Francisco], I spent six months in Paris. I was staging for free in various restaurants, working five or six doubles a week, never seeing the sun. It was a revelation. Food in France was simple, maybe three or four ingredients on the plate. [Chefs] had very definitive ideas about every component — how to sharpen your knife, what pot you cook the sauce in.French cuisine was supreme for a long time, not just because it was the best food, but also because it had a more organized pedagogy and organization that no one else really had.

Your mother cooked French food. Did that ignite your interest in it?

I didn’t cook growing up, but I ate very well. She used a combination of what she learned in France, what she got at the market, and [recipes from] Julia Child and Craig Claiborne. She made beautiful tarts, stews, soup, breads. Food was always done simply and with flavor and satisfaction. Her plum tart, her beef bourguignon, her Cuban bread. Her Niçoise salad. It could be as simple as an avocado half filled with mustard vinaigrette. She seasoned very well. I’ve always had a good palate, and that’s probably because of [her cooking].

Short ribs at Avelina.
Danielle Lirette
How has your French experience informed your cooking? How does it inform Avelina?

What French food brings to New American is restraint. My French training says the fusion needs to be edited. The French approach is, why does this have to be on the plate? That’s the tradition. I take that approach to everything I do. Take that off rather than add this. You should always know what it is you’re tasting. I took French sensibility and applied that to American food, which probably every other chef of my generation would say they did in some way.

This goes back to also why I didn’t decide to do Italian food. The cuisine of the north of Italy is based on cow’s milk; in the south it’s based on olive oil, citrus, fish, sheep’s milk, lamb. Those ingredients here don’t have the flavor they have there. Take dairy: Pretty much all milk that you get here is blended and pasteurized. There’s a problem with getting anything made from raw milk. It’s getting better. In 2000, I went to the James Beard House for the first time, and I brought Colorado products, including a striped bass. It had a slightly muddy flavor that a lot of farm-raised fish has. I was disappointed, and I stopped using it. I revisited it six or seven years ago, and they’d improved the feed, so it had a really clean flavor.
These discoveries and incremental improvements can only happen over time…. One of the points [New York chef Dan Barber] makes is that the chefs evolve as their purveyors evolve. A lot of times, when you’re a fledgling culinary scene, you’re paying for farmers, distillers and ranchers to do what they do. The product has improved as farmers have improved and the culinary scene has matured.

We’ve talked some about the fluidity of Colorado’s food. Does Denver have a culinary identity?

It’s driven by the brewers and distillers. If I had to pick one person executing above everyone else, it would be Todd Leopold. He has not just a local and national reputation — it’s worldwide. He has the kind of training and palate to produce stuff that is better than just about everyone else. That’s always been a part of the Denver food identity.

The bar at Avelina.
Westword
How has Denver evolved over the course of your career in this city? Where would you like to see it go?

It’s gone from a third-tier culinary scene to second-tier. I think everyone would agree. People mention it with Philadelphia, Seattle, Miami. What makes Paris great is not what’s at the top, but what’s in the middle. I compare it to basketball. Think of the championship Bulls in the ’90s: They had Jordan, Pippin and Rodman, but they also had a great bench. What makes a food city great is the neighborhood restaurants, bakeries, fishmongers and street food. That is getting better here as well. As we find more things like that, it’s a sign of the evolution of a culinary scene, not the genius doing the fifteen-course tasting menu. We have culinary talent coming from the food centers — Chicago, L.A., New York; that’s another sign. You see things like the Denver Central Market. Or Carbon Knife Company. These are things that may seem minor, but this elevates the food scene.

How about a biggest lesson learned?

One of the biggest mistakes people make, especially when they’re younger cooks, is to put too much emphasis on the visual, with stuff that looks beautiful on Instagram. Sheer culinary pleasure needs to be paramount: It’s gorgeous to look at once, but when you touch it with a fork, it’s a mess. That’s fleeting, but the satisfaction of eating, especially the aftertaste, lingers on your palate and then in your memory. Also, people should fit their meal within the rest of their day, and they should not suffer. That means restraint. Portion size is important. People should go through the meal and say, “I feel good; let’s do the next thing.”