Joseph Strelnik serves nostalgia and whimsy for breakfast at Morning Collective. Laura Shunk
Morning Collective opened April 3 in a former convenience store at 2160 South Broadway. Chef/owner Joseph Strelnik had spent more than four years as the executive chef at Snooze before learning the corporate ropes at Village Inn, and he’s attempting to blend the best of both experiences here, applying creative twists to breakfast classics while offering something for everyone, be they health nuts or gluttons, at a sub-$10 price point. This means that strawberry cheesecake French toast shares menu real estate with ancient-grain porridge, and diners can add both vegan chorizo and bacon aioli to their meals. Strelnik has also introduced some clever flourishes, including horchata ice cubes in his iced lattes and an option to add a “second breakfast” (really just a to-go mid-morning snack).

We sat down with Strelnik to talk about Kool-Aid ice cubes, the cheesesteak that kicked off his career, and how a desire to cook for his parents led him from fine dining to breakfast.

Westword: You were the executive chef at Snooze, then you spent some time at Village Inn, and now you’re back with your own breakfast restaurant, Morning Collective. What’s your attraction to the first meal of the day?

Joseph Strelnik: Usually people have an attachment to breakfast, and it’s a little different than lunch and dinner. They may not get to eat it very often, or it’s a huge part of their day. We’re going back to the simplicity of what breakfast is, that comfort and intimacy that people have with it. I love breakfast — this is what I want to do. I’ve always loved cooking breakfast. The English breakfast was my favorite meal when I lived in England. I have a sweet tooth, and breakfast is the only meal where you can have something that’s almost dessert as a meal. Breakfast is for everyone: You can have a table relaxing and eating indulgently next to a table eating healthily next to a table getting drunk and having a good time. You can run the gamut on several levels conceptually. I’m starting off your day. I care about how you feel 45 minutes, an hour, three hours after you walk out the door. That’s what drew me to breakfast. 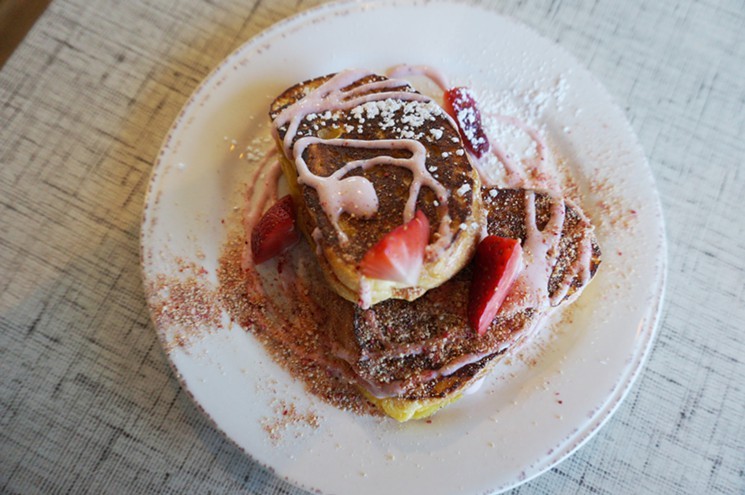 Pancakes with molten centers are the specialty of the house.
Mark Antonation
I see what you’re saying; breakfast makes me think of childhood. Do you have particular breakfast memories that influence what you do here?

My dad didn’t do a lot of cooking, but he’d make pancakes and French toast for us. (And the best grilled cheese, which is why there’s always a grilled cheese on my menu.) I often talk about learning to cook with my mom and grandma, but breakfast is when my dad stepped up. It was nice to see someone try to cook who didn’t really cook. It showed me cooking is for everyone and cooking is caring: He made those pancakes because he loved us. He was proud because he was good at making something; that was a big deal. So that’s where it started.

But you learned to cook, then, from your mom?

I was born and raised in Johnstown, Pennsylvania, a little town. I was cooking with my mom and grandma from a really early age and watching The Galloping Gourmet on PBS; the Food Network wasn’t around then. I made my first homemade tortilla at six. So I grew up cooking with my mom. When I was a baby, I’d sit on her lap and look at the grocery store ads. I think I was born to do this.

How did you become a professional?

I went to college for elementary education. I liked teaching, and I wanted to do something good. I failed [school] miserably. My heart wasn’t there; I hadn’t discovered my passion yet. I ended up working a graveyard shift at Eat’n Park, which was like a Denny’s. I was making a cheesesteak one night, and I was trying to make this cheesesteak really good. I looked down and knew: Oh, I gotta cook. And I never stopped cooking. Once that hit, I thought, okay, how do I do this? Okay, I gotta go to culinary school. At that point, I was fascinated with fine dining. Emeril was starting to cook [on TV], and I was learning about truffles and caviar and foie gras and these grand presentations. I found the best restaurant that I could in Johnstown, and I started as dishwasher and worked my way up to sous-chef. I went to Johnson & Wales in Rhode Island and thought, I gotta get a 4.0; I want to end up working in France.

The healthy bowl, with poached eggs, roasted potatoes and seasonal veggies.
Mark Antonation
So did you go to France?

First I ended up working in Wales under Peter Jackson, the captain of the Welsh Culinary Olympics team. We had these huge gardens, and we changed the menu every day; it was a really hard job. It was all tasting menus, and we only had three people in the kitchen. I was supposed to be there for three months, but I stayed there for almost a year. Then I came back to the States and finished my bachelor’s degree, and I found the best restaurant in Rhode Island — Mill’s Tavern — where I started at raw bar and worked my way up to sauce. I failed on the 4.0, but I got an externship in France at Château de Montreuil, on the Isle of Wight. I met Gordon Ramsay — that was cool. When I came back, I thought, what am I going to do? I wanted adventure — I wasn’t afraid to go do anything after that. So I joined Norwegian Cruise Lines. Then I met my wife, who was from Denver, and went to work in Vegas. It was Vegas, so a year was good. I loved Denver, so after that, I said, okay, let’s come to Denver.

Why leave fine dining at that point?

Fine dining is awesome, and I learned a bunch of stuff about technique and ingredients; it took a lot of discipline. But I missed my parents, and I missed cooking for them. I couldn’t imagine my parents in any of the restaurants I worked in. I grew up really humbly. We ate at home a lot. My parents deserve to eat well. Everyone who works hard deserves imaginative, creative fresh food.

Is that what you’re aiming for at Morning Collective? A place where you can see your parents in the dining room?

I wanted to make a place that was comfortable, interesting and intriguing, but approachable for everyone. I think we’ve accomplished that, down to the design. The wainscoting is almost identical to the color of the house I grew up in, and my mom had wallpaper in the kitchen like we have in the dining room. The food and beverages are really hinged on classic concepts. That’s a big deal for me; that’s where I get my inspiration. Sometimes I modify and turn something into toast or a drink. Sometimes I leave a classic alone, like corned beef hash. We use really good corned beef, and the potatoes are olive-oil-roasted fingerlings. It’s elevated through the ingredients, but the structure of the concept is intact. With other stuff, it’s more, how do I use technique and ingredients to make this not cliché but still classic? It’s fun to give things a facelift. Like the s’mores drink, which has graham cracker cream, coffee, dark chocolate ice cubes and marshmallow froth, and you can put booze in it if you want. It’s taking a s’more and liquefying it.

The Electric Dreamsicle is made with vodka, orange juice and vanilla froth.
Mark Antonation
Ah, yes, the ice cubes. I’ve been hearing a lot about your ice cubes, which are flavored with everything from bacon to tomato to horchata. Tell me more.

I’m not the guy who came up with flavored ice, but I’m the guy who has the cojones to build a program around it. In the Northeast, I went to a couple of coffee shops that hooked up ice machines to coffee kegs to make coffee ice. That made me think about my mom, who made Kool-Aid ice cubes when I was a kid. If you take a more culinary approach to that, you can do a lot of things with it. It became a challenge: How many ices can I do? There’s a lot of science involved in those things — the shape, the melt rate, how much sugar we can use. I don’t want it to be sorbet; I want it to melt slowly. If you put the chocolate ice in your mouth, it’s kind of bitter, but it adds to the drink. The wildflower ice is really pretty, but it also gives you floral lemonade. Edible flowers are gross, but when you get little bits from the melting ice, it’s nice and fresh. It’s just fun for us; it’s a different take on beverages. The ice cubes don’t dilute, they season.