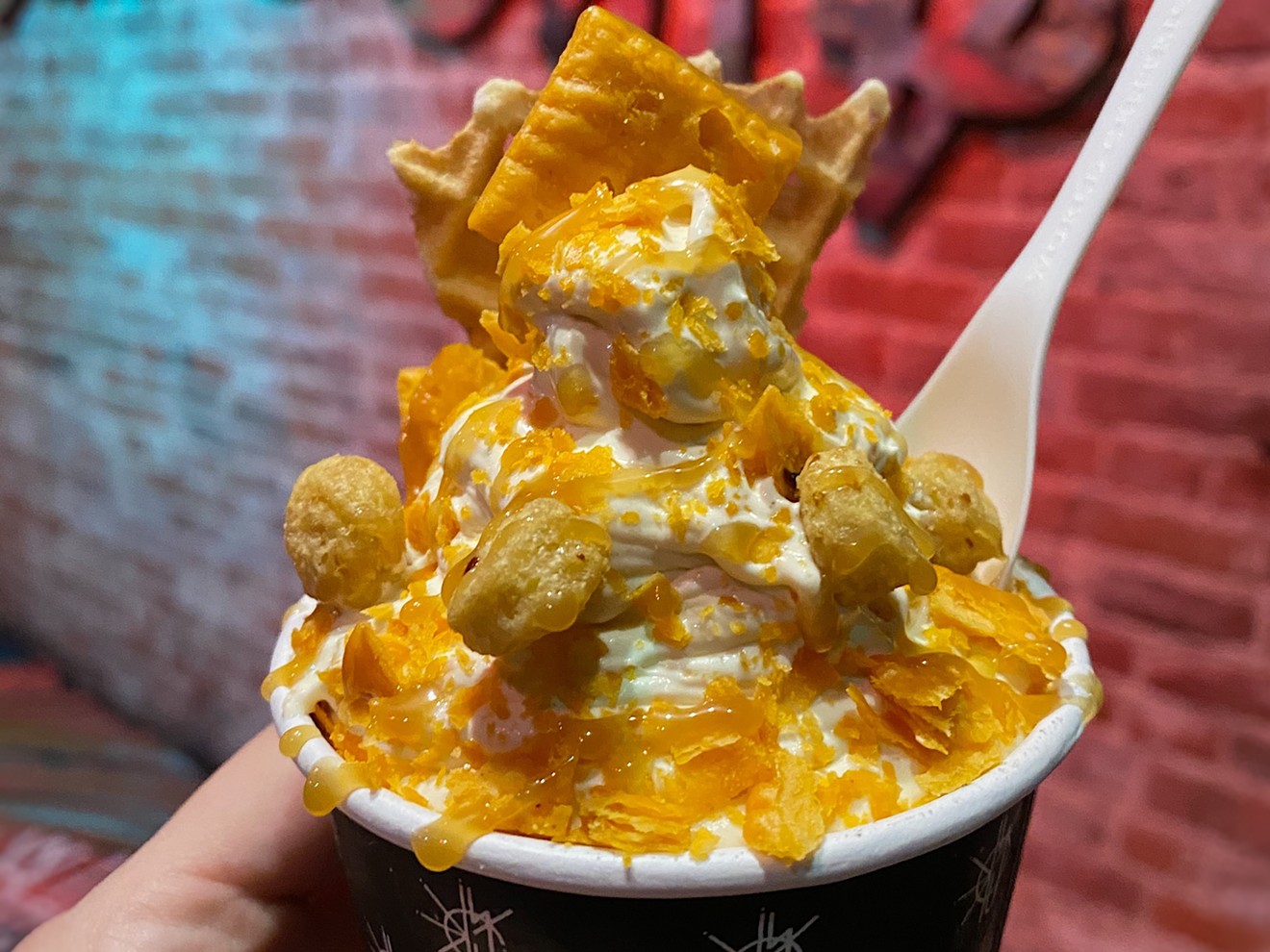 Cereal, Cheez-Its and other sweet, salty and crunchy things are among the topping options at Hidden Gems. Erica Buehler
Despite its name, a new ice cream shop in Larimer Square is anything but a secret. Hidden Gems, a concept from idea aficionado and entrepreneur Joshua Schmitz, is the latest addition to the downtown hub popular with locals and tourists alike, and it's exploring previously uncharted territory in the world of ice cream.

Schmitz is a Denver native intimately familiar with the city’s food and beverage scene. Bellwether, the spot he gave up on East Colfax Avenue (it's now the Horror Bar), attracted coffee lovers, cocktail connoisseurs and even those looking for a fresh haircut. For Schmitz, combining unlikely concepts isn’t new; it’s a challenge that he takes on eagerly, with enthusiasm and vigor.

So when he was asked to bring some life into newly vacant storefronts in what some might have considered an aging Larimer Square, Schmitz accepted. His plan? A Wizard of Oz-themed ice cream shop with crazy toppings and a healthy dose of trap music. You know, standard fare. 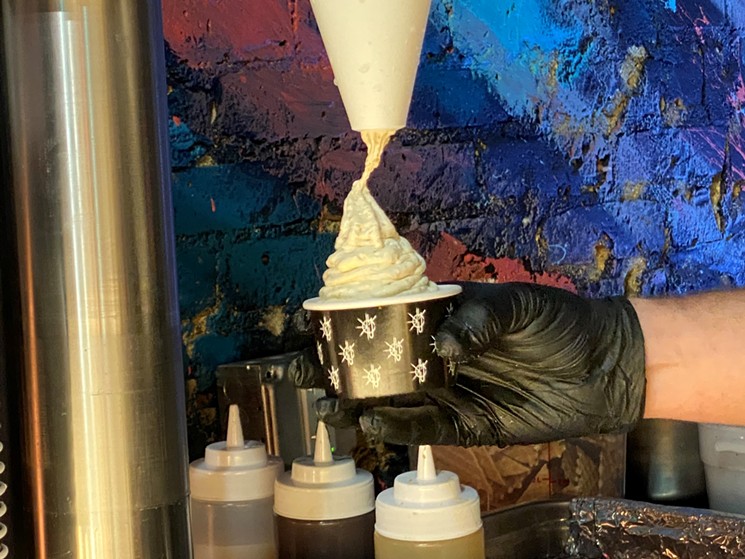 Soft-serve is the name of the game at Hidden Gems.
Erica Buehler
That’s just the beginning: Schmitz was actually selected to head a creative collective to fill three to four storefronts on the block. Hidden Gems is merely the first to officially come alive, and it was a hit before the doors even opened.

The layout of the shop is simple, but there’s more than enough to keep your eyes and mind occupied as you approach the counter. Swirls of Wizard of Oz quotes and bright colors cover the walls and floor, thanks in part to Schmitz’s good friend, artist Wes Bruce; folks bop their heads along to the loud, bass-heavy music.

Awaiting you at the counter is a checklist of toppings — everything from Reese’s Puffs cereal to Cheez-Its — all available to be crushed and incorporated into your soft serve and sprinkled on top for good measure. There are no crazy ice cream flavors, just vanilla and vegan vanilla, which is exactly the point: You use the add-ins to doctor the ice cream to your own level of crazy.

“What I’ve learned is that it isn’t necessarily about something being vegan, but a lot of people care about the dairy-free aspect of it," Schmitz says of his regular and dairy-free soft-serve offerings. "We wanted to make sure we catered to those audiences.”

As for the Wizard of Oz theme, that's a concept Schmitz has been wanting to execute for a long time, and one close to his heart. “It’s the truest life story on how you actually get what you want," he notes. "Dorothy wakes up with this drab, black-and-white life and wants something more, and then this tornado comes along and uproots her whole life. She’s introduced to a strange land, new people, and trials and tribulations. It’s an interesting story of ‘home’ — the feeling of home or being complete or safe or smart; it’s the reality of what we’re all wanting.”

So what was Schmitz’s tornado? “I was married and divorced when I was twenty, and I was forced into retirement from professional rugby," he explains. "The consistent thing in my life is that nothing has ever gone according to plan. I never went to business school; everything I’ve ever done has been through trial and error. But I’ve never felt like I’ve failed. If you try something and it doesn’t work but you still learn something from it, it’s not failing.”

Schmitz’s ever-present ambition is exactly why he was chosen to breathe new life into Larimer Square. While opening three new concepts at once is a tall order, for him it’s all about taking advantage of opportunities. “We never get to make a second first impression. But COVID-19 has given everything a second opportunity,” he says.

After doing his own market research on Larimer Square, Schmitz’s decisions came down to a few simple observations. “It was crazy to me that there was no ice cream shop here," he recalls. "Or that, in the most prolific block of the city, the only coffee place is a Starbucks. I thought, ‘Why not do more than one concept? What does this block need?’” 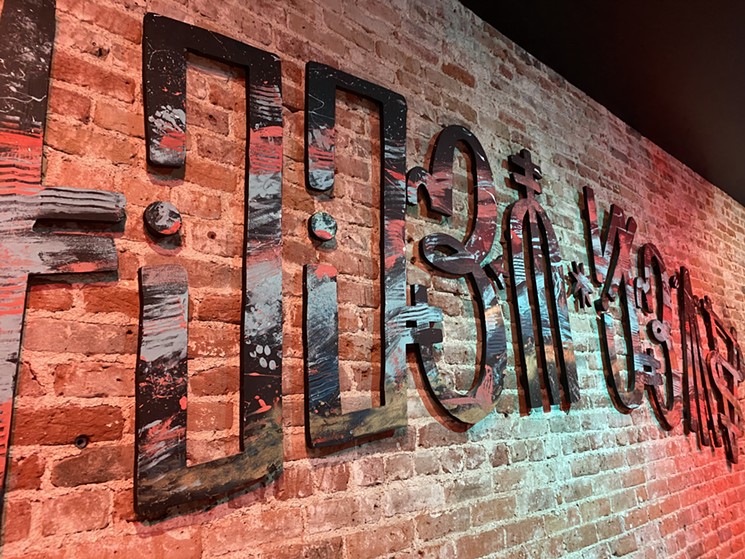 Yes, that says Hidden Gems.
Erica Buehler
Two additional concepts will be opening their doors in Larimer Square in a matter of days. “Basically, it came down to finding a need for Larimer Square — whatever simple needs weren’t already being met," he explains. "A ‘regular’ bar, a local coffee shop, a bakery.” As for a less "regular" bar, Schmitz is quick to credit his neighbors at Green Russell. If someone in Larimer Square wants a really well-done, high-quality craft cocktail, that’s the place to go, he says: “If you want just a casual drink, come hang out with us.”

In the spot next door to Hidden Gems will be the Alice in Wonderland-themed Drunken Bakery, helmed by baker Sabrina Morin. Some of the plans for this place are indeed still secret, but be prepared: the expertly outfitted space will have you questioning reality while you munch on brightly colored macarons made from scratch. A wide array of unusual macaron flavors will be available.

Next to Drunken Bakery will be Ghost Coffee Saloon, the block's first non-chain coffee shop — outside of the coffee counter at the legendary Market that's now part of Larimer Records Cafe —  and also a place to satisfy any boozy cravings, whether at 2 p.m. or midnight. After an initial opening date of November 2020 had to be pushed back, the two concepts will be ready for a “return-to-normal” spring and summer.

“I grew up in this city, and I’m very blessed to know a lot of really talented people," Schmitz concludes. "I came from nothing and was able to build a lot of incredible things. But I want people to understand who this city and this block really are: Denver culture isn’t cowboys and country music, and it’s not stoners. It’s really good Mexican food and trap music. That’s who we are, and I want people to know that.”

Hidden Gems is located at 1411 Larimer Street. Hours of operation are 3 to 10 p.m. Wednesdays and Thursdays; 3 p.m. to midnight on Fridays; noon to midnight on Saturdays and noon to 10 p.m. on Sundays. Follow Hidden Gems on Instagram and Facebook for more photos and information.
KEEP WESTWORD FREE... Since we started Westword, it has been defined as the free, independent voice of Denver, and we'd like to keep it that way. With local media under siege, it's more important than ever for us to rally support behind funding our local journalism. You can help by participating in our "I Support" program, allowing us to keep offering readers access to our incisive coverage of local news, food and culture with no paywalls.
Make a one-time donation today for as little as $1.