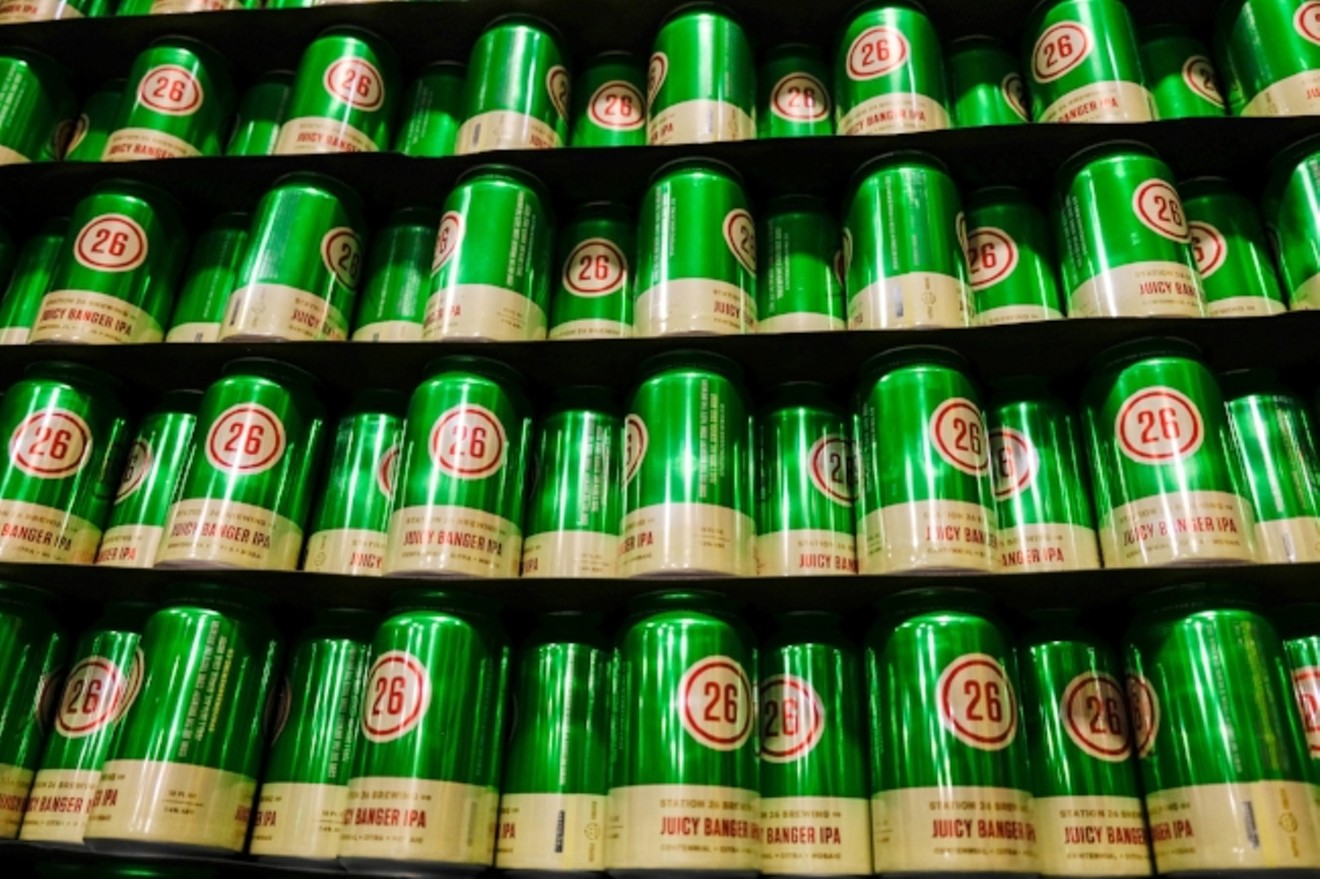 Station 26 Brewing Co.
Almost every brewery in Colorado makes an IPA, but that doesn't mean every brewery makes a great IPA. Only a few brew IPAs that truly stand out, or stand above the rest. While much of that judgment is subjective, some of it is bolstered by numbers. Beer Advocate, for instance, compiles dozens — even hundreds — of reviews to create data that is worth noting. For instance, Station 26 Brewing Co.'s Juicy Banger IPA ranks 13th in Colorado among hundreds and hundreds of IPAs, some made by the most respected breweries in the country.

That's quite an honor, and now Juicy Banger, which continues to gain accolades, is being canned for the first time, which means that more people around the state will have access to it. The beer had been one of just three IPAs among Beer Advocate's top fifteen from Colorado that wasn't being packaged and distributed.

Juicy Banger, which is brewed with Citra, Mosaic and Centennial hops, gets its name from British beer writer Chris Hall, who described certain IPAs as "juicily fruity, tartly bitter." The words "juicy banger," he wrote, describe "everything I look for from my first beer of the night: a full-bodied but brightly refreshing, finely-balanced beer of big flavour yet peerless drinkability. It’s become a hallmark by which I measure a brewer."

Station 26 owner Justin Baccary says he wanted to start packaging the popular beer earlier, but that he had to wait until he had enough hops. Instead, Station 26 has been canning a series of single-hop IPAs, beers that were brewed with just one hop, like Mosaic, Citra or Mandarina Bavaria.

Station 26 Brewing
"The Single Hop IPA Series was originally designed in response to a tight hop market. ... It allowed us the flexibility to purchase unique hops on the spot market and rotate to new varieties as needed," Baccary explains. "Now, contracts that we signed years ago plus a softening hop market due to the industry slowdown have allowed us to procure enough hops to add Juicy Banger IPA to our year-round can lineup."

Juicy Banger has tropical flavors and aromas of apricot, papaya and mango — which are often associated with New England-style IPAs — but it has has the bitterness that is more prevalent in West Coast IPAs. As a result, Baccary says, he wouldn't classify it in either category. "Juicy Banger IPA has the hop profile of 'new school' IPAs — Citra and Mosaic — but is more bitter and less hazy than New England-style IPAs. It's also a much more modern IPA than a lot of the IPAs that have been brewed in Colorado for more than a few years."

Another factor that allows Station 26 Brewing to can the beer is its connection with Sleeping Giant, a large contract brewer in Denver that brews and cans beers for at least six Colorado breweries, including Black Shirt Brewing, the Post Brewing and Weldwerks. (Sleeping Giant doesn't make any beers of its own.)

Now that Station 26 is in cans, that leaves only Comrade Brewing among the breweries who make IPAs ranked in BA's top fifteen that still aren't sold in cans or bottles (Weldwerks packages a limited amount of its Juicy Bits beers, but not much). Comrade has two brews in the top fifteen: Superpower IPA, a classic West Coast hop bomb, and Hop Chops, a double IPA also named for a well-known beer writer's words.

The top fifteen IPAs in the state according to Beer Advocate are: