Fifteen Years Ago, the Kitchen Started a Restaurant Revolution 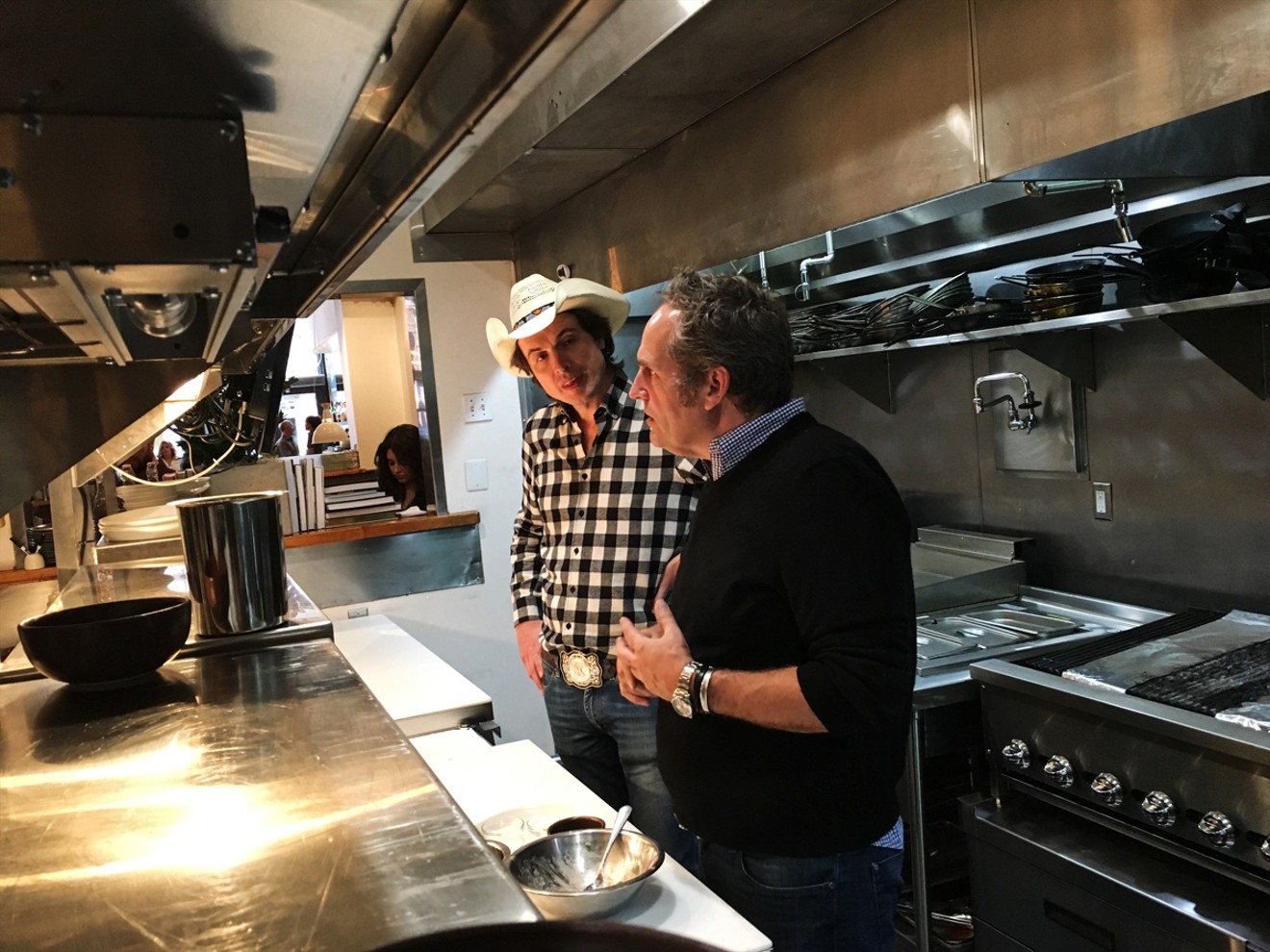 Kitchen founders Kimbal Musk (left) and Hugo Matheson hope to build community while expanding nationally. Courtesy of the Kitchen
It’s been several years since business partners Kimbal Musk and Hugo Matheson cooked together on a line, but in celebration of nearly fifteen years in business — an occasion they’re marking with a refresh of the menu and interior of their flagship restaurant, the Kitchen — the two are putting together a tuna ceviche for a crowd of onlookers while Musk recounts how the pair met. “I’d just moved to Boulder, and one week in, a strange Englishman invited me to dinner,” he recalls. “Of course I went, and honestly, it was one of the best meals I’ve had in my life.”

From that dinner grew a business partnership between Musk, Matheson and Musk’s then-wife, Jen Lewin, that planted the Kitchen on Boulder’s West Pearl Street in 2004. In those days, Musk and Matheson did work together in the kitchen, showcasing finds from local farms in simple preparations, and infusing rustic American bistro fare with flavors from Matheson’s native England as well as Spain and other Mediterranean countries. “We were just cooking food that we wanted to eat, and we thought it tasted better than industrial food,” says Musk.

Restaurants like the Kitchen have proliferated widely in the years since, but at the time, the concept was fresh and even radical. This was in the era before “farm-to-table” was an overused term, when letting seasonal produce drive the menu was still novel. In Boulder, the Kitchen quickly found an audience hungry for its brand of sustainability, which extended beyond sourcing through decor built from reclaimed wood, and propelled a no-waste philosophy that saw the restaurant cutting its trash down to a small weekly box and recycling or composting everything else.

The Kitchen highlighted its suppliers by naming them on the menu and on chalkboards throughout the space, an unusual acknowledgement back then. This underpinned its community focus, which the restaurant bolstered with family-style dinners, often featuring local farmers. 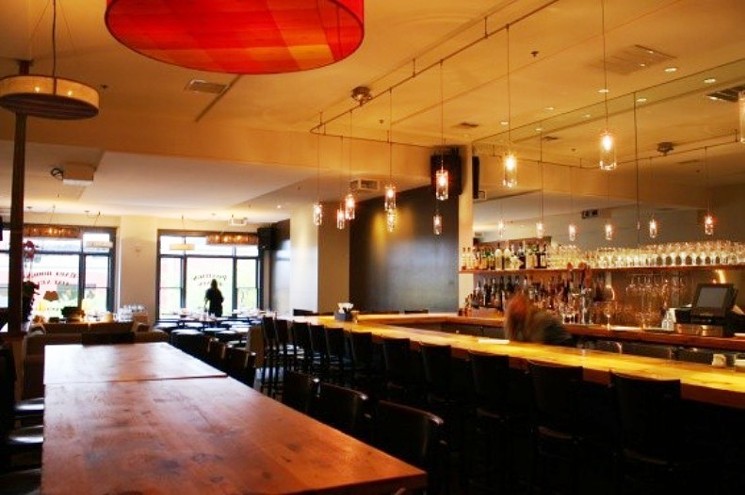 The Kitchen opened in Boulder in 2004.
Westword file phoro
Frasca Food and Wine opened on the other side of the Pearl Street Mall the next year, and Musk says that restaurant, coupled with the Kitchen, really kicked off Boulder’s food revival — Bon Appétit named it the best small food town in America just a few years later. The Kitchen used its success to extend its sustainability campaign, open the more casual Kitchen Upstairs, and kick off partnerships with local schools to start community gardens and foster cooking education.

While the Kitchen’s sourcing ethos inspired restaurateurs around the region, for a time the eatery still functioned as a particularly good neighborhood bistro, perfecting staples like tomato soup, Bolognese and sticky toffee pudding, and building a loyal audience that patronized the place multiple times a week. “We’ve really loved building relationships with local farmers,” says Musk. “It’s been amazing to be part of watching the local farm scene grow to the size it is today and to have been a leader in resetting the median.” But just changing the way Boulder eats wasn’t enough for the pair: Musk and Matheson were determined to have a broader impact on the food system and how communities eat, and that meant scaling up. 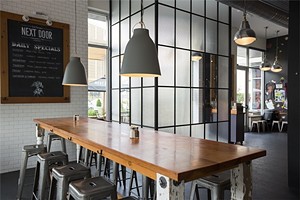 The Kitchen Next Door in Glendale.
Danielle Lirette
To reach a broader audience, they opened the Kitchen Next Door in Boulder in 2011, distilling the Kitchen’s ethos into a more affordable model that verged on fast-casual. “We think that everyone would choose farm-to-table if they had the means and the time,” Musk told Westword in advance of that opening. “We want [Next Door] to give the community an inexpensive farm-to-table option that someone could get even if they only had ten minutes for lunch.”

But they also began expanding their territory. In 2012, the Kitchen opened its first legacy bistro outside of Boulder, moving into a sprawling space a block from Union Station and bolstering staples from the Boulder menu with a raw bar and more shareable platters. In Denver, the partners got their first taste of building a community outside of their home town, something they thought was essential to their success and mission. “Building a relationship with a restaurant is what’s important,” Matheson said at the time. “We want to build a relationship with the Denver community and provide something that they enjoy.” He went on to compare the Kitchen with the village pubs that are the center of socializing in England.

Those restaurants laid the groundwork for national expansion: The Kitchen now operates legacy bistros in Fort Collins, Memphis and Chicago as well as Boulder and Denver, plus a handful of Next Doors and a pair of Hedge Rows — one in Denver and one in Indianapolis — that are similar to the original bistro but focus on fare from a wood-fired oven. The community-garden efforts have evolved into a full-fledged foundation, now called Big Green, which operates learning gardens in every community where the Kitchen currently operates, plus Pittsburgh, Detroit and Los Angeles. The partners see Big Green relationship-building as a vital step in connecting with communities where they may eventually open restaurants, and a foundation project is usually the first step in expansion.

As their empire has grown, the partners have had to streamline menus and sourcing, a challenge they say helps them create maximum impact. “It’s understanding how to work on a scale with values that has been the biggest challenge,” says Matheson. While they’ve continued building relationships with small farmers in each market, the chef says they’re now focusing on fewer, deeper relationships rather than bringing in scattershot ingredients from several farms. 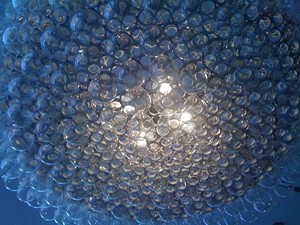 Jan Lewin light fixture in Denver's Kitchen.
Westword
anapolis, where opening a Hedge Row was especially rewarding, Matheson says. But then the partners turned their attention back to the original Boulder space, which was due for a refresh after nearly fifteen years. Some of that was cosmetic: The back of the house received new equipment and the dining room got new furniture, plus high-top community seating around the bar. The partners also installed Lewin’s orb light fixtures, which are featured in all of the group’s other restaurants.

The most significant change, though, is the menu. “With the refresh, we wanted to match the way Hugo and I love to eat, which is more communal,” says Musk. “We designed this new menu very carefully. It’s really designed for this communal eating. Whether you order chicken, broccoli or hummus, it goes in the center of the table.” The new list is heavy on large entrees, and there are more vegetable dishes and broader global flavors, including roasted turnips with miso butter and piri piri chicken, which comes from Musk’s home country, South Africa. But the staples — tomato soup, garlic fries, Bolognese and, yes, sticky toffee pudding — remain.

The nuts and bolts of the food overhaul fell to Meg Grace Larcom, who came on two years ago to open the first Hedge Row. “As for sourcing, we’re focused on sustainability more than ever,” she says. “We have more locations now, so if we get organized, we can make a big impact.” And if all goes well with the Boulder menu, it will lay the foundation for menu changes at all the Kitchen bistros.

“This is our special place; it was our first love,” says Musk. “For us to come back and give it some love, we’re really excited.”

“We look forward to the next fifteen years,” concludes Matheson.