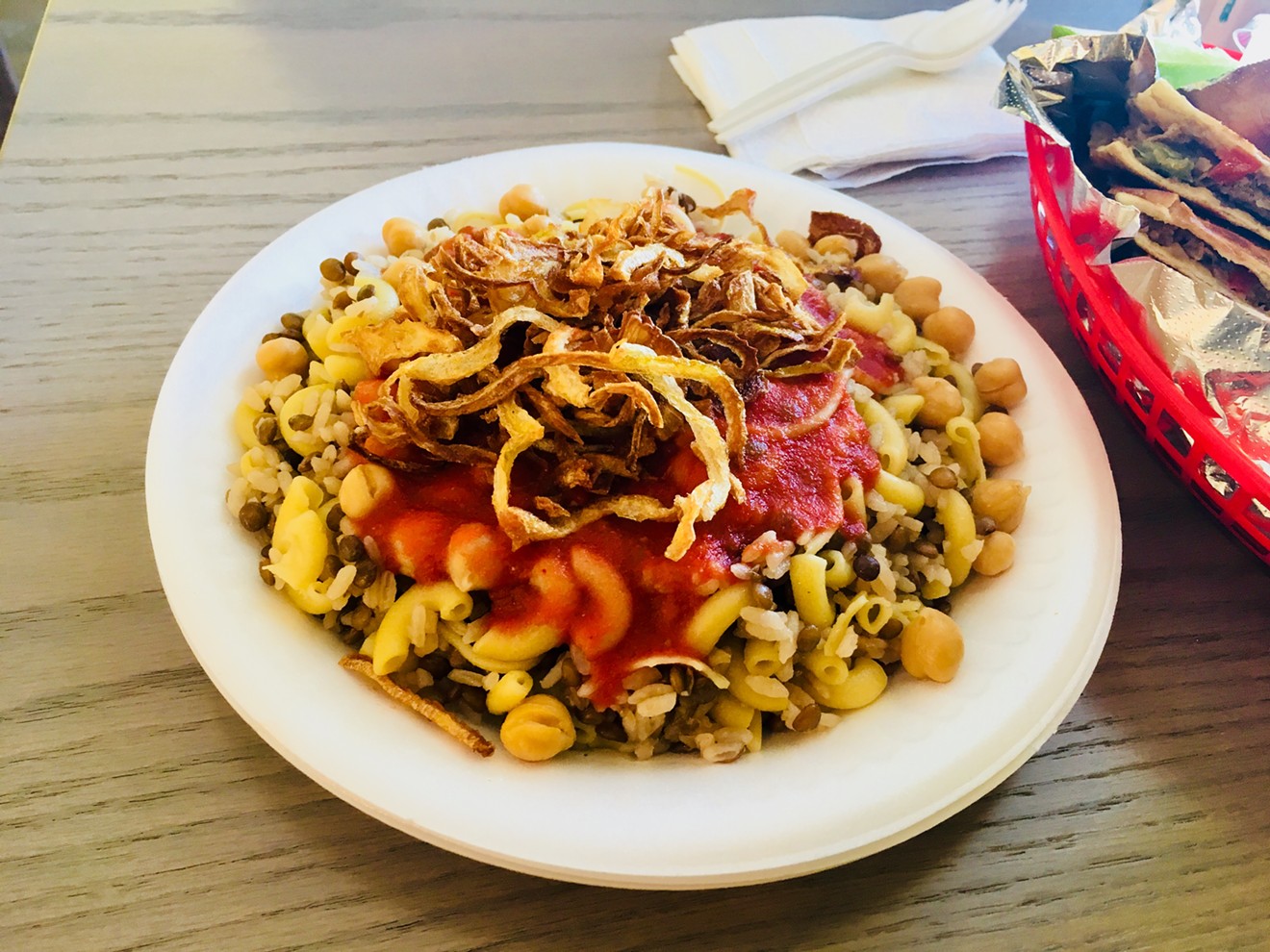 Koshari is Egypt's national dish — and you can now find it on Havana Street. Maureen Witten
While there are many restaurants serving Middle Eastern cuisine in the metro area, Koshari Time at 1155 South Havana Street is the only one that offers Egyptian food specifically. “Denver is filled with different cultures and Middle Eastern communities, as well as open-minded people who are willing to try new things," says owner Ahmed Abostate. "That’s why I knew it would be the perfect city to open my restaurant in.”

Abostate is right: I'm certainly willing to try new things, but I have to admit that, having zero knowledge of Egyptian cuisine, I was more than a little worried that I’d look like a backcountry hick trying to order from a menu with (what I’d assumed would have) tricky pronunciations and dishes with unfamiliar ingredients. However, to my relief, Koshari Time offers a very uncomplicated menu consisting of two main dishes with familiar ingredients, along with four desserts (most of which are also explained on the large menu above the cash register). Ordering, then, is not too hard to screw up, but if indecision plagues you as much as it does me, you can try one of everything on the menu while keeping your tab under $25. The staff is extremely friendly and knowledgeable about the food, and open to answering as many questions as you can think of. 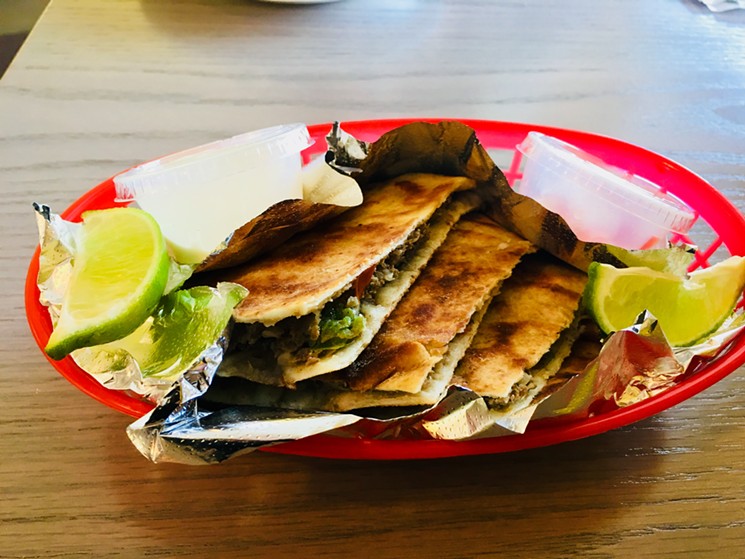 Hawawshi sandwiches on housemade flatbread.
Maureen Witten
Koshari, the signature dish, is an Egyptian staple consisting of lentils, macaroni noodles, chickpeas and white rice; here, a few spaghetti noodles are intertwined in the mix as well. On top of the mountain of fiber-heavy goods rests a ladle of garlicky tomato sauce and a tangle of curly fried onions. Although the entree is typically eaten as a vegan dish in Egypt, at Koshari Time, you can order yours plain ($3.99-$6.99) or with chicken or ground beef on top ($2.99 extra). The sizes are ample and come in small, medium and large. When split between my husband and me, a large order fed us well, with some left to take home.

When I first ordered my koshari at the counter, I pronounced it in a way that only a suburban white woman who’d never been to Egypt could — "I’ll have the large co-SHAR-ee’" — and quickly learned from hearing the staff say the name back to me (without snickering, thankfully) that the correct pronunciation is “CUSH-er-y.”

Al dente noodles, lentils and rice in the koshari came to our table piled high and piping hot. They tasted as if they were boiled with a little salt and garlic, and I wondered how they got the noodles, grains and legumes so uniformly cooked: no noodle too mushy, no legume too firm; I experienced the same toothsome texture on each steaming bite. The garlic tomato sauce that tops the dish can be ordered with spice or no spice; I tried both and could hardly tell the difference. In fact, there was such an insignificant amount of heat in the spicy version that I would confidently serve it to my toddler — whose palate is so sensitive that she’d turn away a bell pepper. The crispy fried onions on top (which I suspected were Vidalia, from the intensely sweet flavor) added some much-needed crunch and a touch of fat to the otherwise low-fat fare. Abostate confirms that the onions are fried in vegetable oil, for those looking for an entirely vegan repast.

Koshari is said to have been introduced to Cairo and other cities from traveling Egyptian soldiers returning from Italy and India, thus the origin of the chickpeas and macaroni noodles. It makes sense that this would be a great fuel source for hardworking soldiers who need energy. I wish I had known about this dish a few months ago when I was training for a half-marathon; it would have been perfect for the low-fat, high-carb regimen I was following. Koshari eventually became the national dish of Egypt when vendors all over the larger cities began perfecting and selling it from roadside carts. In fact, some restaurants exclusively serve Koshari and nothing else. 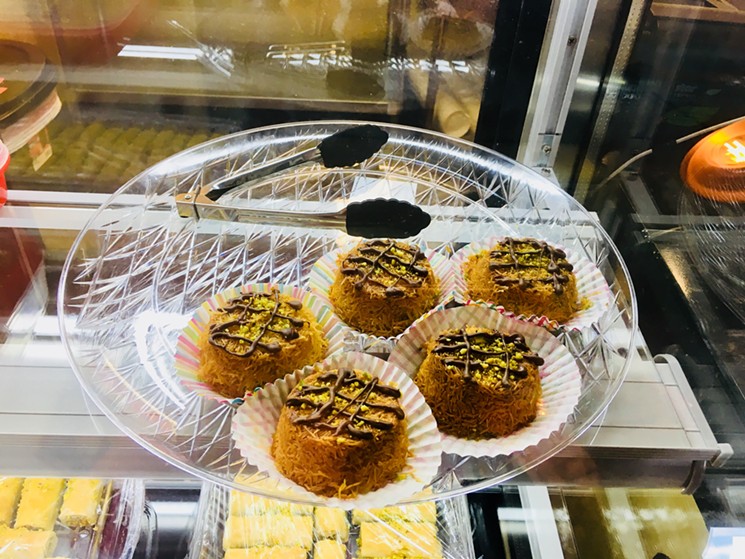 While Koshari Time offers its namesake meal in large quantities, the menu also includes hawawshi ($6.99), a sandwich consisting of ground halal beef (which, like all the meat served here, has been slaughtered in accordance with Islamic law), peppers and onions. The beef is cooked with sweet onion and green and red bell peppers and has an almost Philly cheesesteak vibe, but without the cheese. And, unlike a Philly cheesesteak, the hawawshi also includes a hint of nutmeg and allspice. The triangular flatbread housing all the pungent, meaty goodness is made in-house; it comes browned and crisped (with a little bit of chewiness) and served with lime and some damn fine dipping sauce, a creamy white concoction most likely made with yogurt.

Once you’ve scarfed your koshari and hawawshi, get ready for dessert, because delicate pastries will beckon from the glass display case from the time you walk in to the time you finish your last noodley bite. Give in to the kunafa ($2.50- $2.75 each), with its fine, pasta-like strands that resemble an upside-down bird’s nest dyed vivid orange. It has the texture and crunch of shredded, baked coconut, but the flavor of phyllo pastry laced with honey. Hiding in the center is a filling of semi-soft cheese, slightly tangy like cream cheese and with the texture of chilled butter. There are three kunafa flavors to choose from: a plain nut pastry, a fruit-topped version, and one with a hazelnut spread and pistachios carefully garnishing the top. Buttery, pistachio-lined baklava ($1.99) and Egyptian rice pudding — roz blaban ($3.99) — are the other sweet-tooth-soothing dessert options.

It’s also worth noting that the unassuming Egyptian tea ($1) should not be passed up. I almost did, but luckily a server tipped me off that this is just as much of a must-try menu item as the koshari, since tea is the national drink in Egypt. The complexities from the sweet mint and clove flavors in the smooth black brew was as refreshing and comforting as it was complementary to the savory koshari and hawawshi. 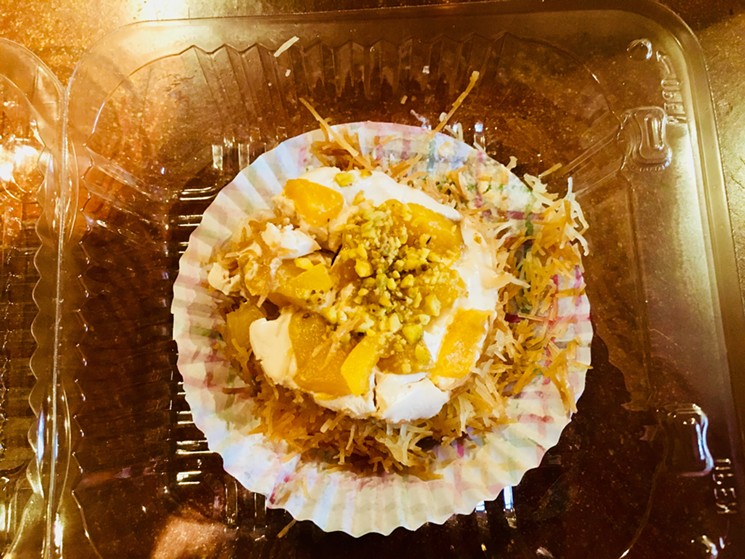 Kunafa with fruit topping.
Maureen Witten
Abostate opened Koshari Time at the beginning of February and is planning an official grand opening that will happen sometime in the next two weeks (he hasn't set the date yet). You don’t have to wait for the grand opening, though, since the restaurant already offers dine-in, takeout and catering service, as well as daily specials of soups and other Egyptian specialties. If you’re craving a certain food in particular or want to try something that’s not on the menu, Abostate encourages customers to put in their request with a staff member, and he’ll have it ready for pick-up the next day. According to Abostate, “All food is freshly made each morning, and nothing is ever served a day old.” The quality I experienced on my visits confirms his claim.

Denver is indeed filled with diners from all over the world whose palates are open to trying new cuisines, not to mention home to a growing Middle Eastern community that might appreciate having another representation of foods from their home region, or who are looking for dishes free of animal products and food that conforms to Islamic dietary needs. Koshari itself is an excellent meal for anyone to try — from endurance athletes to busy professionals on a lunch break looking for a unique dish with a home-cooked feel.

Koshari Time is located at 1155 South Havana Street in Aurora. The restaurant is open from 11 a.m. to 9 p.m. Monday through Saturday and closed on Sundays. Call 720-787-4160 for details and to find out about catering services for large and small events.