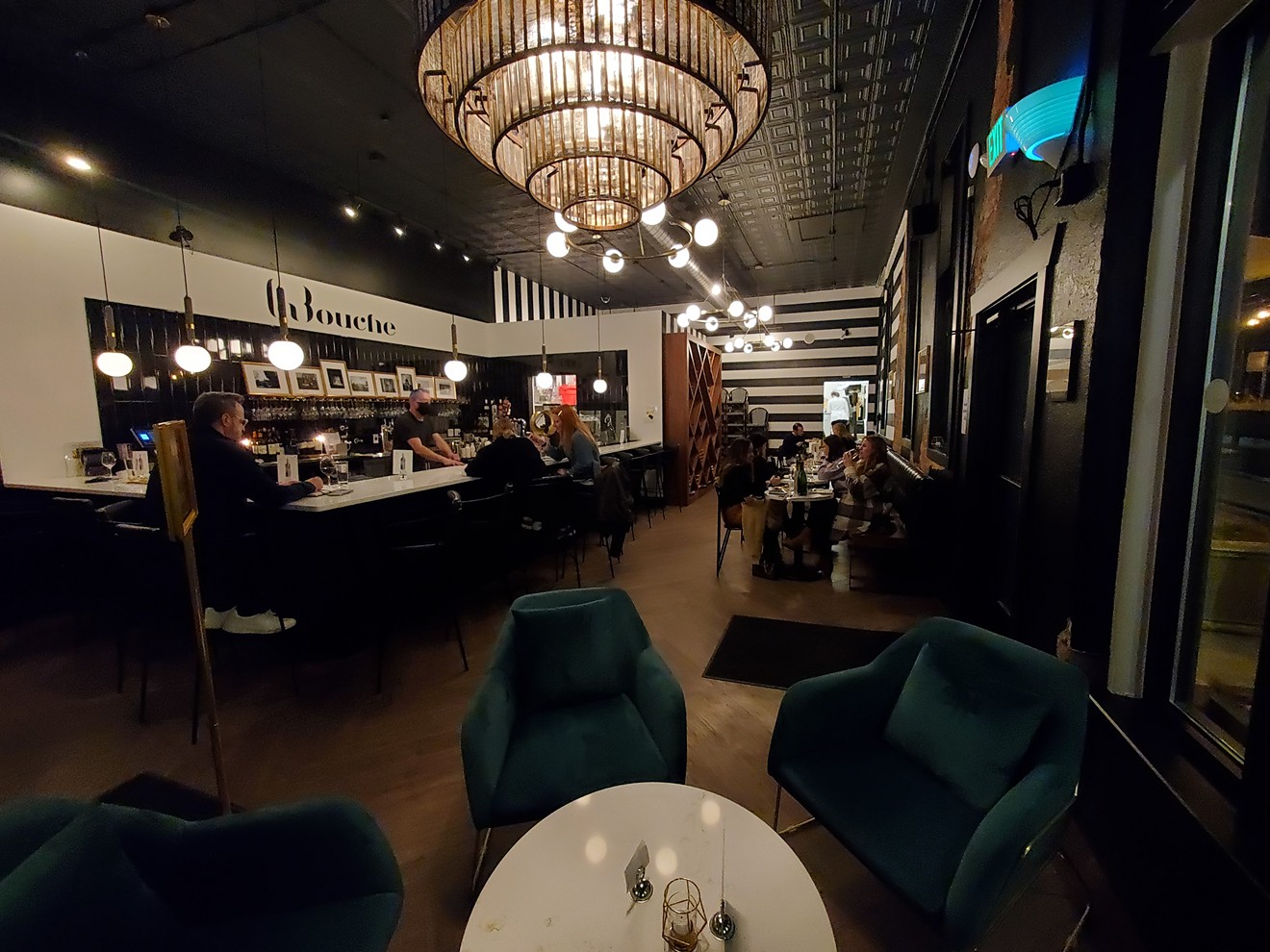 Molly Martin
"Wine has always been our passion," says Alex Tréton. So much so that she and her husband, Alexis, left their jobs and home country in the middle of the pandemic in order to open a wine bar in Denver that bridges French and American culture.

La Bouche, at 1100 East 17th Avenue, is the result, with its elegant black-and-white color scheme balanced by a casual atmosphere that's ideal for lingering over a flight of vino.

When Alex was nineteen, she became friends with people from Colorado who were living in France. After eighteen months, the new friends returned home; in 2002, Alex decided to visit them, flying from France to Denver to spend a season living in Evergreen and snowboarding at different resorts. She returned to Colorado several more times over the years.

By 2018, she and Alexis had married, had two children and were living outside of Paris. She was an international sales manager in the food industry, and he was a project manager in telecommunications, but they spent every holiday visiting vineyards in the different regions of France.

Alexis finally met Alex's Colorado friends when they were traveling in France, and the family decided to visit Denver together. Her husband and the kids "all loved it," Alex recalls. She and Alexis tried out a local tapas bar, and casually mentioned the idea of opening a wine bar in the city one day. "Our friends loved it, but it was just something you say while on holiday," Alex says with a laugh. 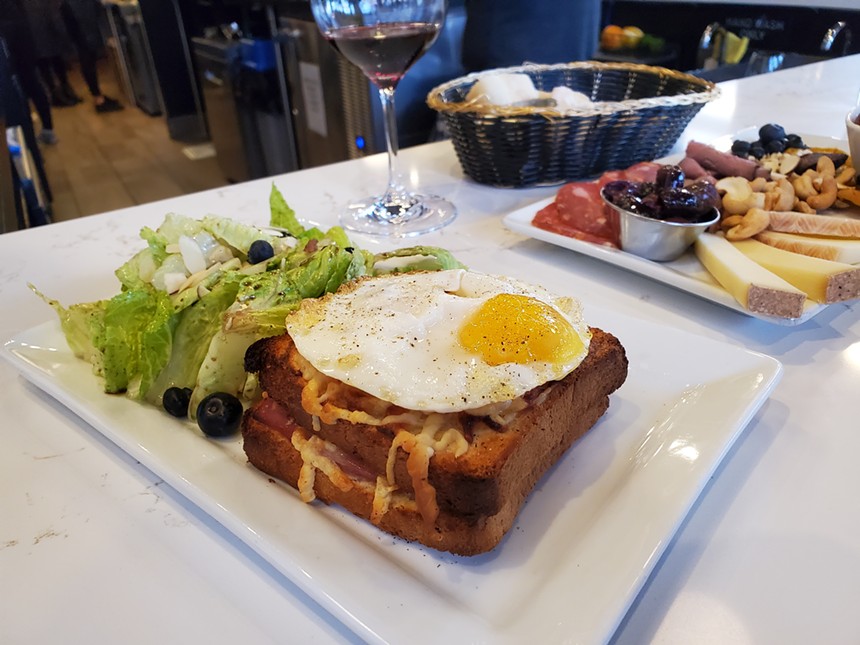 The croque madame is available anytime at La Bouche, including during its new Sunday brunch.
Molly Martin
But once they returned home, Alex and Alexis kept talking about the possibility. "Alexis was really bored with his job," Alex explains, adding that she'd also taken note of Denver's growth since her earlier trips to the city. "We started to study that crazy idea we had during holiday and realized it wasn't that crazy of an idea. It could be interesting, and something we would really love to do."

So, Alexis quit his job with the plan of relocating in May or June of 2020. But then the pandemic hit. Unable to make the move, the couple continued researching, looking at potential locations remotely. "We found this space, but we couldn't visit, so we called everyone we knew [in Denver]" to ask for advice, Alex says. Ultimately, they decided to go for it, purchasing the space from its previous owner, who'd run Link coffee shop in the location.

After barely securing their visas in time to avoid the year-long pause on travel from France to the U.S. that ran from November 2020 to November 2021, Alex, Alexis and their children finally made it to Denver on December 28, 2020. "It was scary," Alex remembers. If they hadn't gotten approval when they did, the space "would have been closed for a year."

But they did make it, and after they did some work on the interior, La Bouche opened in late September 2021. "We have the perfect neighborhood," Alex notes. "The community is very warm and open to trying new things." 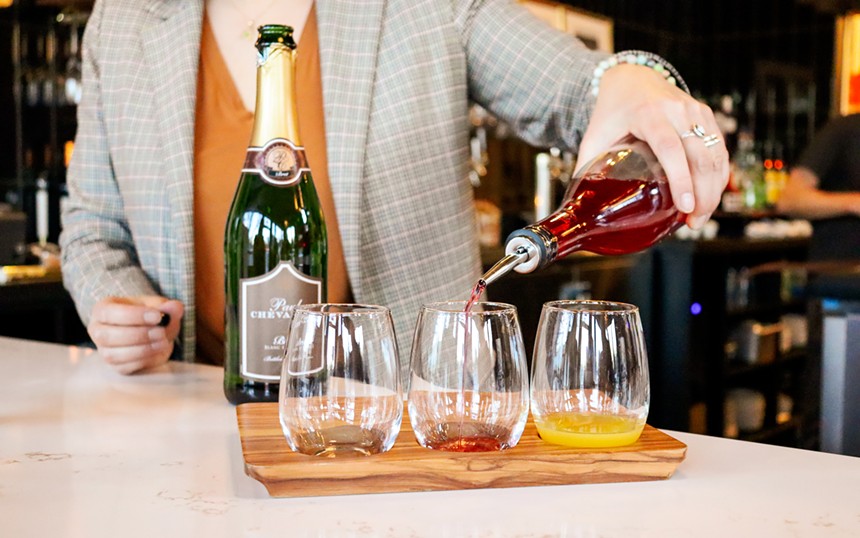 Mimosa flights are on the menu at La Bouche's brunch.
La Bouche
One of those new things is La Bouche's approach to its wine menu. In the U.S., wine is categorized by grapes, while in France, it's all about terroir, or the specifics of the environment where the wine is produced. To bring those approaches together, the list at La Bouche is organized by grape, with at least one French and one American option available for each, making it easy to compare and learn about terroir while doing so. "The approach has to be simple," Alex adds.

La Bouche also offers flights, "something we don't have in France," she notes. "It's a really interesting approach." She and Alexis say they are happiest when a guest orders a flight, then orders a glass or bottle of something they enjoyed from that flight.

Alongside wine, La Bouche has a small menu of classic French fare as well as cheese and meat board options. As with the wine, they put a lot of care into sourcing the best ingredients for items like the croque monsieur (also available as a madame, with an egg added on top) and quiche. La Bouche also recently added a Sunday brunch with mimosa flights, available from 10 a.m. to 3 p.m.

While a trip to Paris may be out of reach for many right now, a trip to La Bouche is a welcome new option in Uptown.

La Bouche is located at 1100 East 17th Avenue and is open from 4 to 10:30 p.m. Tuesday through Thursday, 4 to 11:30 p.m. Friday and Saturday, and 10 a.m. to 3 p.m. Sunday. For more information, visit labouche.wine.
KEEP WESTWORD FREE... Since we started Westword, it has been defined as the free, independent voice of Denver, and we'd like to keep it that way. With local media under siege, it's more important than ever for us to rally support behind funding our local journalism. You can help by participating in our "I Support" program, allowing us to keep offering readers access to our incisive coverage of local news, food and culture with no paywalls.
Make a one-time donation today for as little as $1.