Wisps of smoke escape from the last embers in a black barrel smoker, the only evidence that whole chickens had been roasting beneath the closed lid earlier in the morning. The smoky smell mingles with the scents of meats sizzling on the grill and sauces and soups simmering out of sight in food trucks and trailers parked in a loose circle around picnic tables and open-sided tents in an Aurora parking lot.

The owner of that smoker is Tacos y Pollos ZaZaZa, which sells whole, half and quarter birds, as well as chicken burritos, tacos and quesadillas, from a yellow-and-red trailer at La Esquina Del Sabor, a truck rally of sorts at 15200 East Colfax Avenue.

"Food-truck owners are usually lone wolves; they don't like other trucks around," says Doug McMurrain, who owns the shopping center and parking lot and manages La Esquina Del Sabor, where on busy weekends twenty or more vendors congregate to sell food from various regions of Mexico as well as El Salvador, Venezuela, Colombia, Honduras and other Latin American countries. "But here they attract more customers by being all in one place." A drone view of La Plaza Colorado and La Esquina Del Sabor.
Courtesy of Doug McMurrain
McMurrain purchased the property in early 2019 as part of a plan to convert a former Super Kmart into an indoor event center and marketplace. He'd gotten calls from a few food-truck owners asking if they could set up in his parking lot, but last spring, he suddenly started hearing from many more owners because of the coronavirus pandemic. "I started getting two or three calls a day from food trucks saying that they had no place else to go," he recalls.

That was the start of La Esquina, which at first took the form of an outdoor market, with vendors selling goods as well as food. McMurrain didn't ask too many questions, but he soon heard from the Tri-County Health Department that not all of the food vendors were licensed, and those vendors were told by the department to pack up and go home. Several of them did what they needed to become licensed, inspected food businesses, McMurrain points out, and then returned to the market...where they stayed. More and more Aurora residents were hearing about the place and its unique food offerings. This extra-long taco is a machete from Tacos y Machetes La Carpa, a regular at La Esquina Del Sabor.
Mark Antonation
"Now it's just food trucks with permits," the property owner points out. "I charge $300 a month [to start], and they can come for one day a week or every day. I know I could charge more, but I just want them to sell food and to support their families." Once the food trucks are established, the rate goes up to $600, he adds.

McMurrain points out the diversity of the cuisines available, explaining that he always presses cooks who say they make Mexican food to divulge more information. "I could say I make American food, but does that mean lobster rolls from New England or Texas barbecue?" he asks. "It's the same in Mexico."

So you'll find birria specialist Tacos El Reydesel (which makes all things birria, even cult-status birria ramen), seafood from El Zarandiao, Juarez-style street food from Lonches El Bañado, and specialties from Jérez, Juárez, Mexico City and many other regions. McMurrain advises the truck owners to bring their A game and use the best ingredients they can, since customers vote with their dollars. "Friday, Saturday and Sunday are the biggest days, and Sundays are when people come out with their families, so there are open-air, socially distanced tables," he adds. 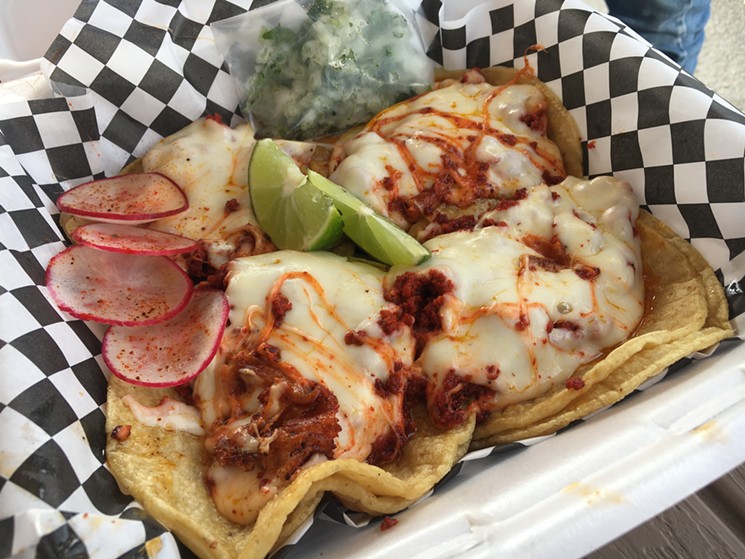 These cheesy chorizo tacos from La Carpa are trending up in the Mexican street food scene.
Mark Antonation
La Esquina acts as something of an audition for Aurora vendors looking to move up, since McMurrain is more than a truck rally manager. He's a property developer with a number of large projects under his belt, most notably Plaza Fiesta in Atlanta, a combination indoor market, mall, food hall and events venue that opened in 2000. His plan is to open something similar at La Plaza Colorado, the shopping center that currently holds La Esquina Del Sabor, the vacant Super Kmart and a VASA Fitness outlet. Work is already under way inside the 100,000-square-foot Kmart space to add enough business space to have a significant economic impact on the area, just a mile up East Colfax Avenue from the University of Colorado Medical center on the former Fitzsimons property.

McMurrain's plan calls for twenty shipping-container kitchens, so that some of the food-truck owners now at La Esquina can move indoors. There will also be 192 vendor stalls in the central area of the cavernous space, a bakery and butcher shop (both with glass walls, so customers can see the action), a produce section, a flower shop, a cafe and a beer cave. And that's not all: On the opposite side of the building, there will be spaces for services such as hair and nail salons and massage therapists, private rooms for birthdays and other events, and a second-floor play system for kids. 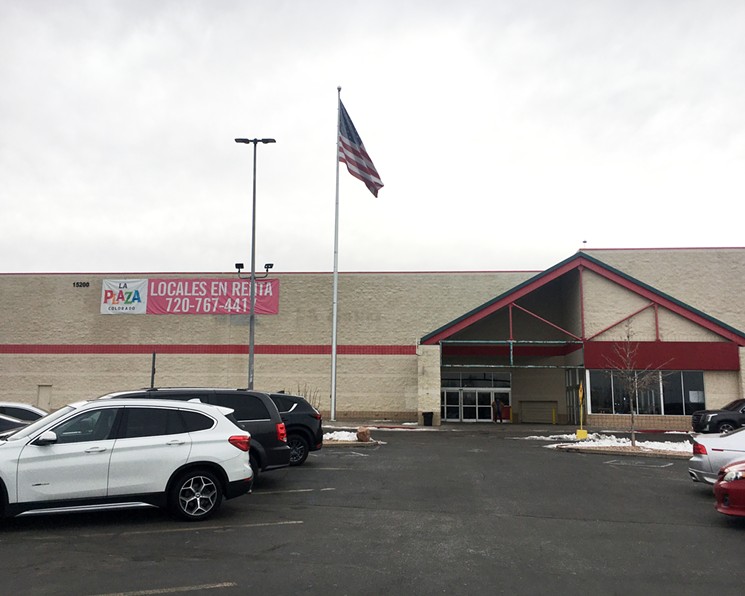 This former Super Kmart will soon become La Plaza Colorado
Mark Antonation
"It's basically a village," the developer explains. "I focus on the Hispanic demographic."

McMurrain's interest in Hispanic culture goes beyond economics; he pays attention to the food, the people and the community to understand the needs and desires of business owners and customers alike. La Plaza Colorado is a massive undertaking, with more room for vendors —  many of whom have already committed — under one roof than you'd find in many small towns. "Of the 268 positions for businesses, already 55 percent are Hispanic woman-owned," he notes. 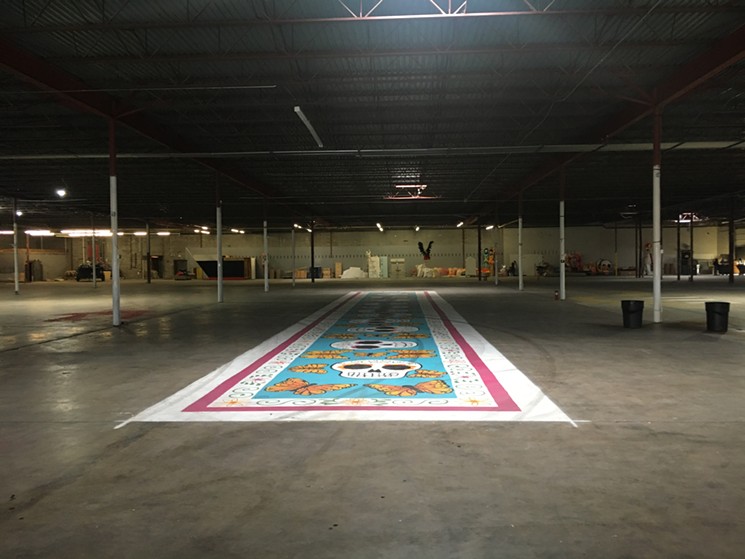 Inside the vast La Plaza Colorado in Aurora.
Mark Antonation
While opening such an enormous project in the middle of the pandemic could have been disastrous, McMurrain says that initial delays proved to be a blessing in disguise. While COVID will almost certainly continue to affect business for months to come, La Plaza is several months from completion, with May as a possible target.

Until then — and even after the indoor market opens — La Esquina Del Sabor will continue serving food outdoors. McMurrain set up a stage on one end of the parking lot for live music, and he continues to take calls from interested vendors. He points to a vacant field to the west of the property where new housing will soon be popping up; the medical campus keeps getting busier, too, with employees and visitors alike in need of more options for breakfast, lunch and dinner.

That aroma in the parking lot rising to tempt fans of tacos, tortas, pupusas and other Latin American cuisine? That's just the first course of what's cooking at La Plaza Colorado.
KEEP WESTWORD FREE... Since we started Westword, it has been defined as the free, independent voice of Denver, and we'd like to keep it that way. With local media under siege, it's more important than ever for us to rally support behind funding our local journalism. You can help by participating in our "I Support" program, allowing us to keep offering readers access to our incisive coverage of local news, food and culture with no paywalls.
Make a one-time donation today for as little as $1.