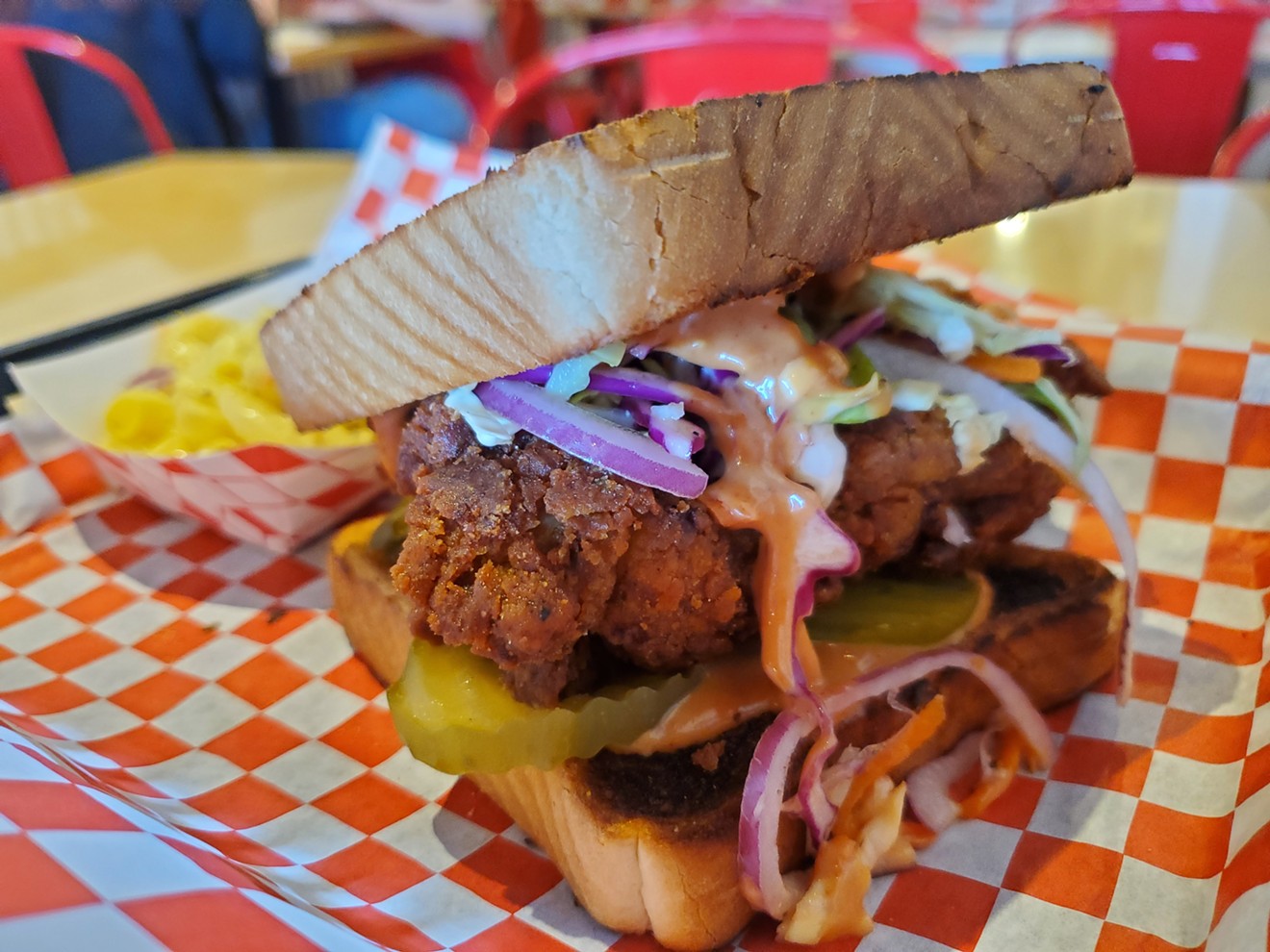 The spicy fried chicken sandwich at Kickin Chicken comes on Texas Toast. Molly Martin
In July 2020, Kickin Chicken opened at 275 South Union Boulevard in Lakewood, where it specializes in serving fried chicken with some unexpected additions. There's chicken katsu, for example, and tenders served on a cheddar jalapeño bubble waffle, as well as such sides as mac salad, Mexican street corn and fried rice.

In less than two years, Kickin Chicken has become a go-to for many in the area. Even in the late afternoon on a recent weekday, a steady stream of customers came in, placing to-go orders at the counter or opting to dine in at the ten or so tables set up in the small space.

In recent years, fried chicken (and its spicier cousin, Nashville hot fried chicken) has been popping up all over Denver. And two months ago, fewer than ten minutes from Kickin Chicken, Slammin Chicken opened at 1870 South Garrison Street with a somewhat similar menu — as well as some notable differences.

Both are Asian-owned businesses located in small strip malls, and both eschew bone-in fried chicken for tenders and sandwiches. But each offers diners a unique experience. 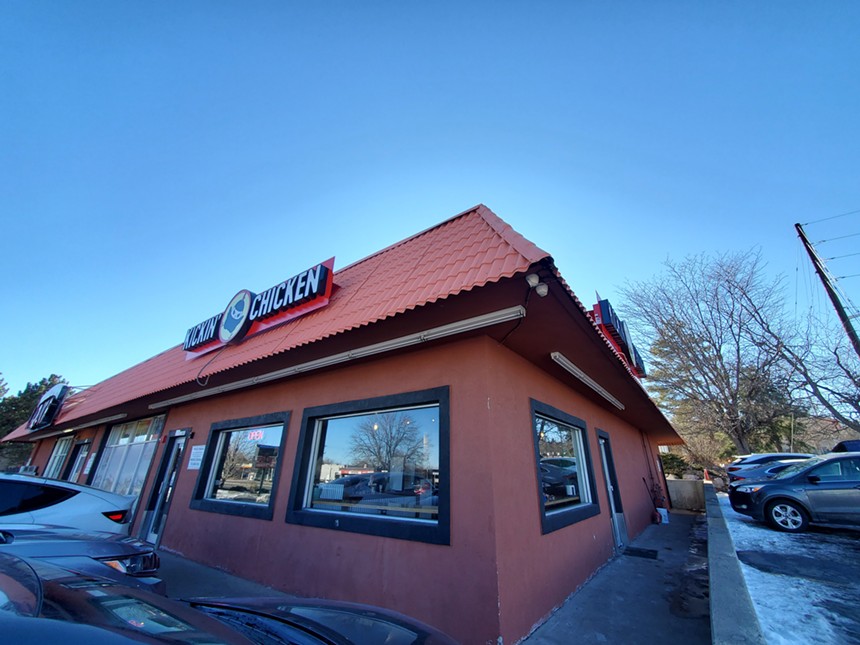 I opted for the spicy chicken sandwich with a side of mac salad, a traditional take on that picnic dish except for the pale yellow hue hinting at the addition of mustard — presumably to add some "kick." The sandwich was built on buttered Texas toast, which held up well but also led to some overly bready bites. The chicken — a large thigh — was juicy, with a thick, craggy crust for supreme crunch. It came topped with slaw, thick sliced pickles and the sweet-and-spicy Kickin Sauce. Overall, though, this spicy chicken was pretty mild on heat — a good thing for those with a more sensitive palate looking for a slight kick. 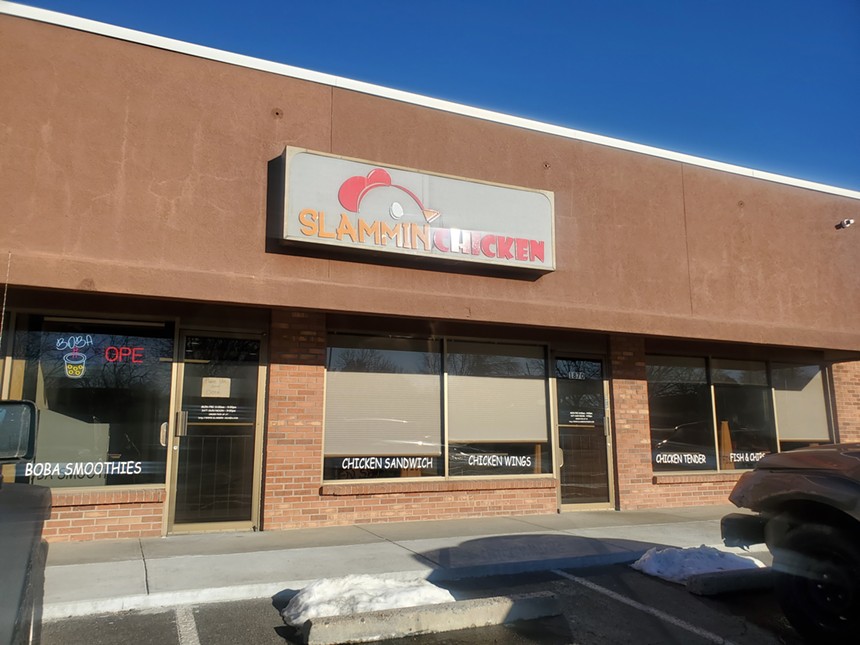 Slammin Chicken has been open for just two months.
Molly Martin
Over at Slammin Chicken, the interior is much more bare-bones, with a few comfy booths and not much in the way of decor. But the menu offers quite a few more choices. In addition to tenders and sandwiches (available here in original, spicy, Nashville and Buffalo), there are salads, wings, fish and chips, fried shrimp, cheese curds and boba drinks.

I sipped on a mango boba smoothie ($5.50) while I waited for my order (both eateries served up the food in less than ten minutes). In order to do a direct comparison, I opted for Slammin Chicken's spicy chicken sandwich ($10.50), which also comes with your choice of side — slaw, fries, a side salad or mac and cheese. I went with the mac and cheese, which had a flavor reminiscent of the mac and cheese served at fast-food establishments. Not exactly a bad thing, but not memorable, either. 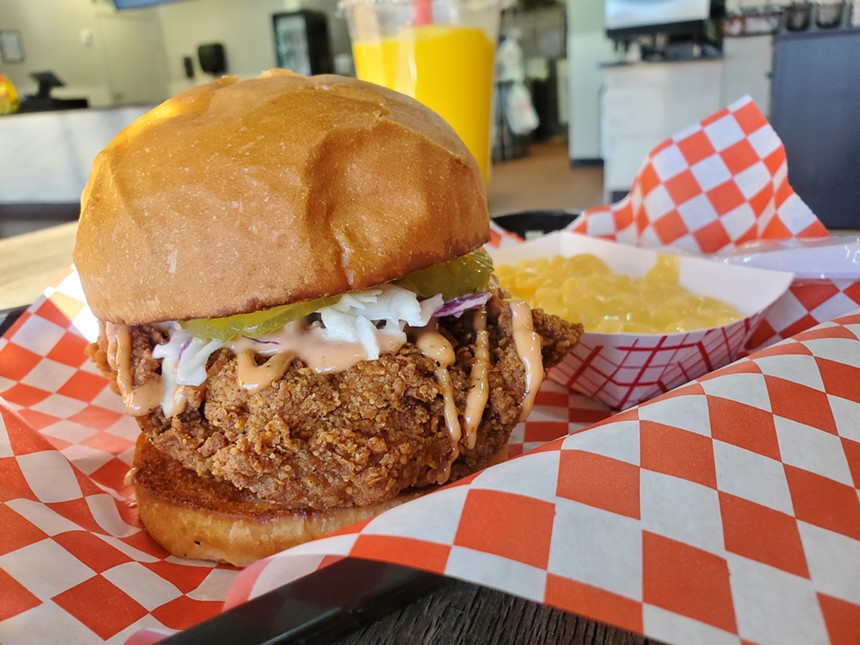 Slammin Chicken's take on the spicy fried chicken sandwich packs a lot of heat.
Molly Martin
This chicken sandwich arrived looking less golden than the version at Kickin Chicken, and on a soft brioche bun instead of Texas toast. Slammin Chicken also opted for a breast instead of a thigh, which was far thicker while still remaining juicy and flavorful. The batter leaned more light and crisp, but the toppings were similar: a cooling slaw and slices of dill pickles, though these were thinner. Like the Kickin Sauce, the house sauce was sweet and slightly spicy, but the real heat was packed on with the addition of habanero powder. Spice lovers, this is the sandwich for you.

The overall winner: Lakewood. Both of these places offer a lot of value for the price and left me craving more. So whether Kickin or Slammin, the chicken scene in this suburb is hot.

Kickin Chicken is located at 275 South Union Boulevard in Lakewood and is open from 10:30 a.m. to 9 p.m. daily; visit kickinchickenrestaurant.com. Slammin Chicken is located at 1870 South Garrison Street in Lakewood and is open from 11 a.m. to 9 p.m. Monday through Friday and noon to 9 p.m. on Saturday and Sunday; for more information, visit slamminchicken.com.
KEEP WESTWORD FREE... Since we started Westword, it has been defined as the free, independent voice of Denver, and we'd like to keep it that way. With local media under siege, it's more important than ever for us to rally support behind funding our local journalism. You can help by participating in our "I Support" program, allowing us to keep offering readers access to our incisive coverage of local news, food and culture with no paywalls.
Make a one-time donation today for as little as $1.