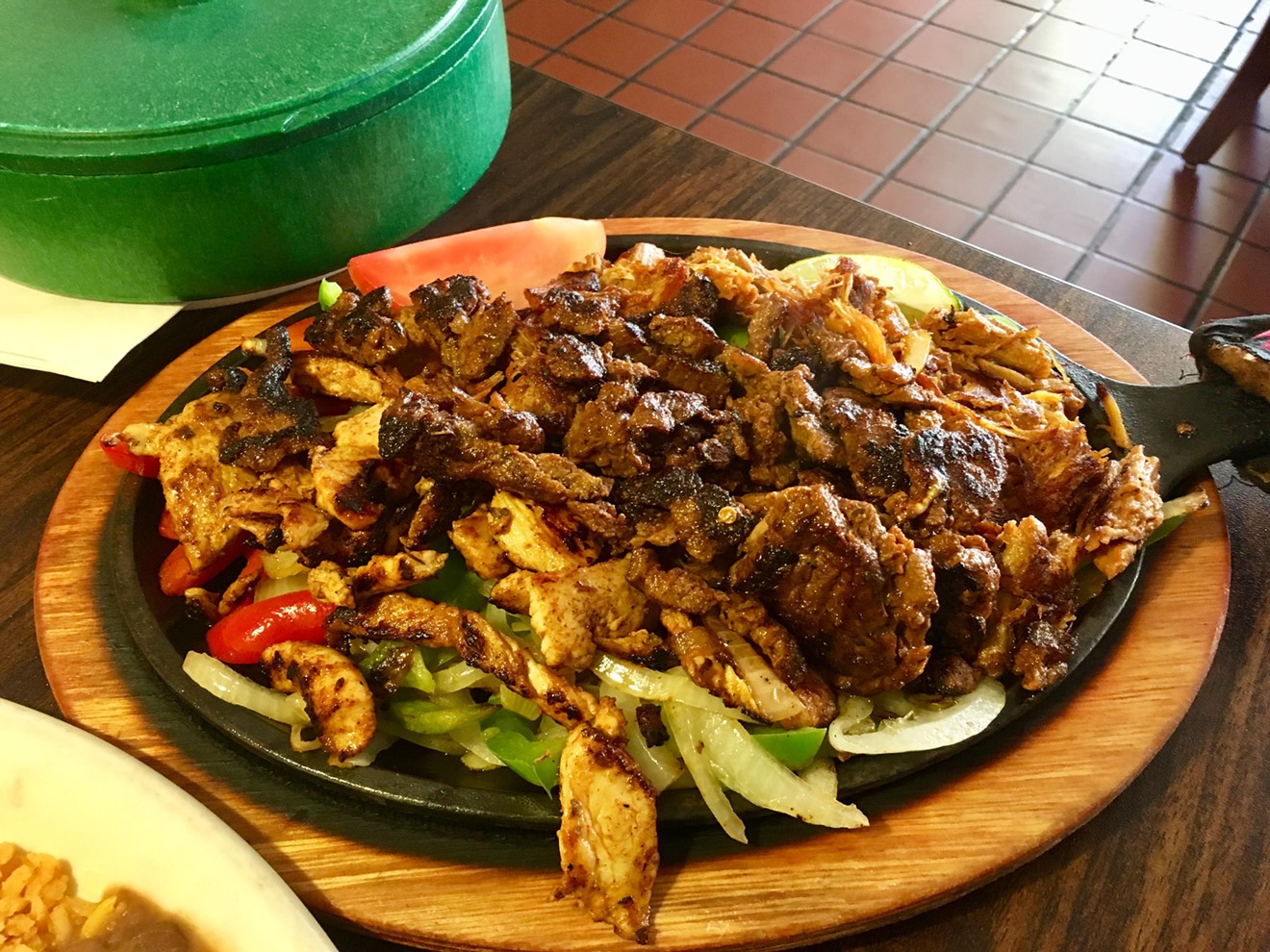 If you're eating at a place called Las Fajitas, you might as well order the namesake dish. Maureen Witten
Sweet, fatty, salty, smoky, spicy: It’s not a new Chili Peppers album, but a bite of the huarache at Las Fajitas at 2680 South Havana Street in Aurora. A huarache ($10.50) is similar to a tostada, only the masa for a huarache is thick and lightly fried, resulting in a chewy texture on the inside and a crisp, lightly brown surface that resists soaking up any excess moisture and is strong enough to hold up to a variety of toppings. Huaraches are named after a Mexican sandal because of the dish’s oblong, shoe-like shape. If the huarache at Las Fajitas was modeled after somebody’s shoe, it was probably Shaq’s, because it took me two meals and a snack to finish off the high-top-sized leftovers.

Las Fajitas tops its huaraches with a choice of carne asada, chorizo, carne al pastor, carnitas or pollo, along with refried beans, lettuce and Monterey Jack cheese. A thick shoelace of sour cream is strewn across the top, and the whole thing is served with a side of thick, smoke-forward, crimson salsa. For my first bite, I took just a small sampling of the fried masa base; it was warm and crispy on top, with an inner consistency that was soft and flexible. Yes, it resembled a tostada, but the flavor and character were more reminiscent of a Mexican torta. I proceeded to try the pork, pineapple and salsa toppings individually, which on their own were nothing exciting. But when I assembled a forkful that combined all the elements into one bite, the result was a wallop of flavor, to which my tastebuds repeatedly responded, “Come at me, bro." A huarache big enough for a professional basketball player.
Maureen Witten
Of course, when a restaurant boasts “best fajitas in town,” I take that as a personal challenge. At Las Fajitas, you can choose from vegetarian, chicken, steak, al pastor, carnitas or shrimp. Since I often suffer from a severe case of FOMO when dining out, I was relieved to see that the menu offers the trio option, a choice of three of the above for $19.99. I went steak, chicken and carnitas, and while I was happy I didn’t have to wonder “What if?” on the drive home from lunch that day, I would advise diners to skip the trio and order the full portion of carnitas fajitas. Shredded pork is often easy to overcook, but Las Fajitas offers a moist, flavorful, chili-and-lime-scented version that had me turning the skillet to put the carnitas in full fork-stabbing range. The chicken and steak were tender, but they lacked flavor and were overly charred (to the point of tasting burned). The toppings for the fajitas were served up in modest portions, but the guacamole was so fresh I wanted to slap it. I happily piled the table salsa on top of each fajita I assembled because its full-bodied flavor, bright with tomato and garlic, brought all the components in the tortilla together and added a smoky element to each bite.

Owner Alberto Granados affirms that the marinades for all of the fajita meats are family recipes: “My mother learned from my grandmother in Guanajuato, and my mother taught my brother, who is our head chef at our Havana location,” he explains.

Granados also points out that another unique family recipe comes in the form of a cocktail: the Las Fajitas cooler drink that includes a mix of Don Q rum, Triple Sec, orange juice, sweet-and-sour and a splash of Sprite for $6. The Tres Hombres margarita ($8 for 12 oz., or $13 for 28 oz.) is another good bet that packs a triple tequila wallop along with Gran Gala and sweet-and-sour. Apart from the fajitas and signature drinks, Granados recommends the Tampiqueña combo meal ($18.25), a combination of chicken, steak and shrimp plus a cheese enchilada, a roasted jalapeño, rice, beans and three tortillas — another FOMO-fighting platter.

Outside Las Fajitas.
Maureen Witten
Breakfast isn’t just for early risers at Las Fajitas, since you can choose from five different selections ($8 to $11) any time of day or night. Daily beer specials ($3.25 to $3.75) and lunch deals ($8.99) make it easy to dine on a budget. Health-conscious folks or those with special dietary needs are able to order from gluten-free and vegetarian selections, and low-fat and fat-free whole beans are offered in replacement of the traditional refried beans.

Best fajitas in town? You decide. Worth the visit? Absolutely. Granados ventures that “if you come once, you’re going to come again,” even if it’s because you’re curious to try the dish that’s named after a sandal — a delicious, Shaq-sized sandal.

Las Fajitas is at 2680 South Havana Street in Aurora and is open Monday through Sunday from 10 a.m. to 9 p.m. All menu items are available for takeout; call 303-755-3366 for more information or to place an order.