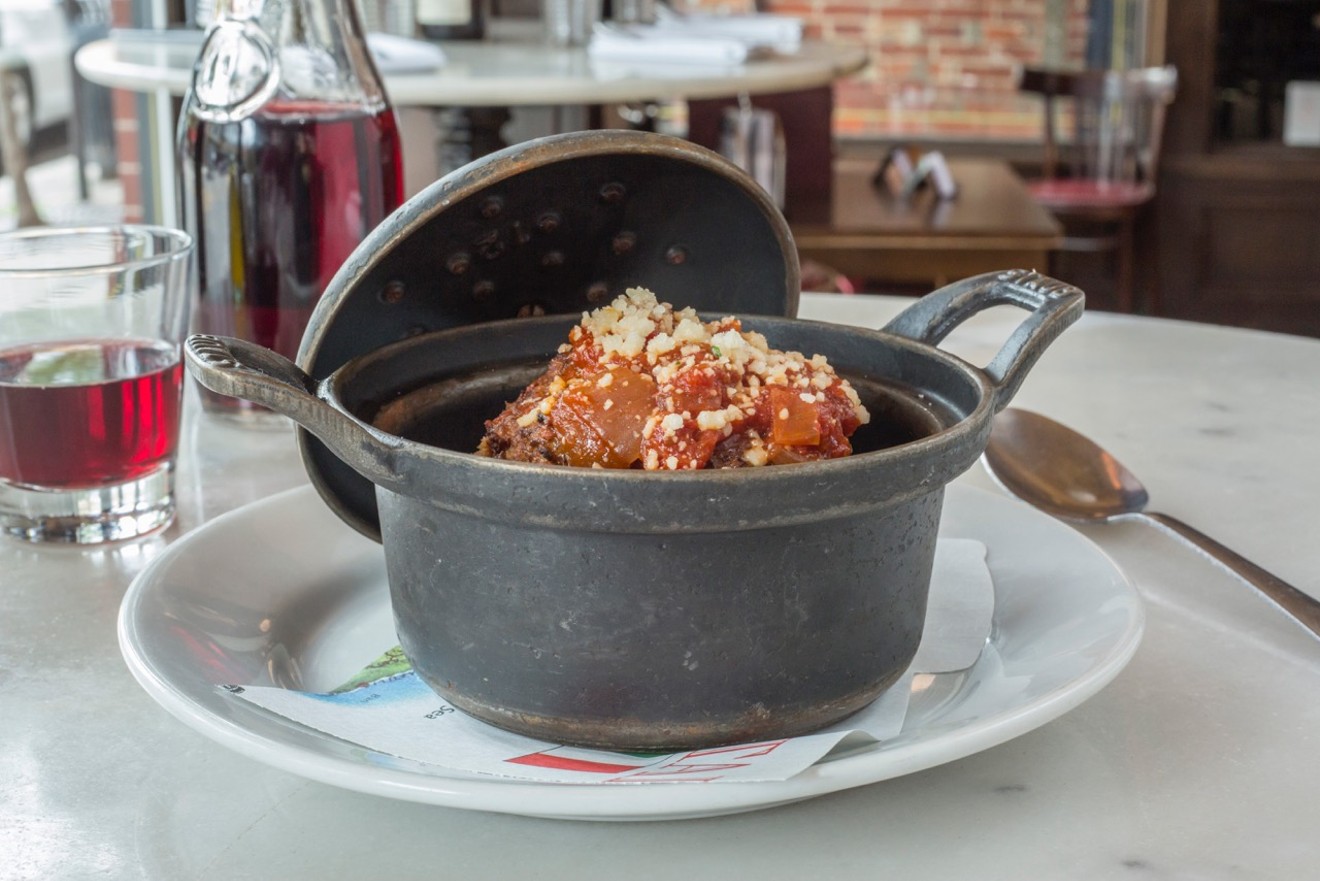 Marcella's meatball is one of the restaurant's signature dishes. Courtesy of Marcella's
Cameron Mitchell Restaurants, which is based in Columbus, Ohio, has grown steadily in the Midwest since founder Cameron Mitchell opened his first restaurant in 1993. The company has taken a cautious approach to Colorado, though, bringing Ocean Prime to Larimer Square in 2006, but otherwise keeping a low profile. Mitchell maintains multiple brands in his stable of eateries, so it was only a matter of time before more would come our way. The latest is Marcella's, which is scheduled to open on September 25 (or thereabouts, as these things go) at 1801 Central Street in the heart of LoHi, in a neighborhood once known for its proliferation of Italian restaurants.

Marcella's currently has two locations in Columbus; the LoHi restaurant, on the ground floor of a new apartment complex, will be the first outside of Ohio. Mitchell says he named the place after the cook at an Italian villa he and his family have been visiting since the early 1990s. "We just became friends with her over the years," the restaurateur notes, adding that naming a restaurant can be tricky, but "in this case it was super-simple. It took me about fifteen minutes. I said, 'We're going to name it Marcella's!'"

When Mitchell opened the first Marcella's in Columbus in 2012, he flew the original Marcella to the U.S. for the grand opening. She had never even left Tuscany before, he says; he put her up for four nights in New York City, and took her to the Culinary Institute of America at Hyde Park (where he went to school and is a past chairman of the board of trustees) so she could lead a few cooking classes before heading for Columbus.

"When you think about the best Italian cooking, it's simplistic in nature," Mitchell says, "with fewer ingredients — high-quality ingredients." That's the goal with Marcella's, he adds: serving food that a cook from Tuscany would recognize and enjoy.

Bringing a new restaurant from out of town into a thriving independent restaurant scene might seem risky, but CMR president and COO David Miller (who has been with Mitchell for 21 years) says the company does it by building a staff of CMR long-timers along with a good percentage of local talent. "One thing about our organization that's critical to our success is instilling our culture," Miller says. "And the unique thing about Denver is that everyone wants to move here."

Executive chef Jacob Glowacki and general manager Dain Cooke both relocated to Denver from Columbus this summer to open the new Marcella's. Glowacki has worked for CMR since he was a high school senior, when he began as an apprentice before attending cooking school in Columbus. "The food scene out here is great, and people are very adventurous and willing to try new things," he observes. That's why he thinks the restaurant's feature program with seasonal menu specials will be a hit with Denver diners.

The space at 1801 Central Street was originally slated to become a Rusty Bucket Restaurant & Tavern, a sister company that CMR operates in six states, but the company switched gears, instead choosing Westminster for a Rusty Bucket. (The Rusty Bucket at 3355 South Wadsworth Boulevard in Lakewood is not related to this chain.)