Mario's Ocean Club will close on Saturday, August 17. Mark Antonation
Mario Vega launched his cozy seafood joint, Mario's Ocean Club, in May 2018, taking over where the Chowder Room left off on South Broadway. Things weren't easy though, Vega notes, and six months after the grand opening, he was already looking for a buyer to take over the space. And just over a year in, Mario's will close after dinner service this Saturday, August 17.

Vega says that shortly after he put the restaurant up for sale, business improved enough — especially with an added boost from Denver Restaurant Week in February and March — that he'd put thoughts of closing out of his head. But at the same time, he and a business partner were planning another restaurant project. "With this new opportunity, I didn't think I'd be able to do both well," he explains.

And then at the beginning of summer, Vega received a new offer for the restaurant, and the timing felt fortuitous. "I made the decision about a month ago and informed the staff to give them time to line up new positions," he says. "They've all been great and have stayed on to the end." 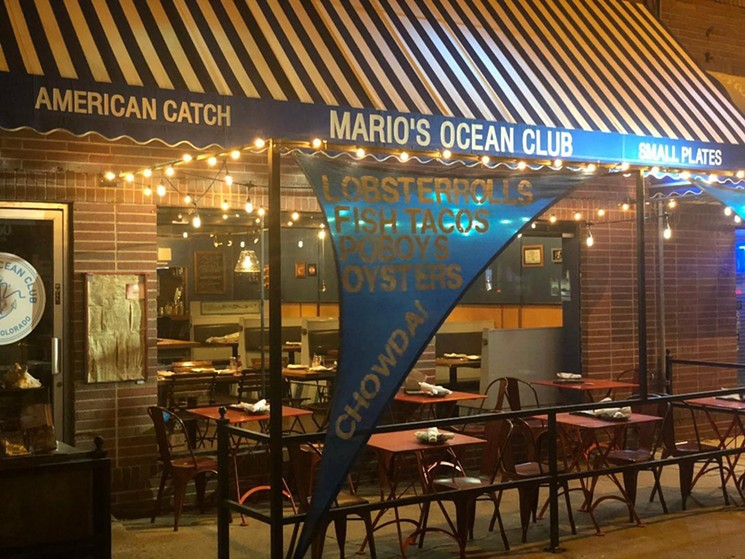 Sneak in for one last seafood dinner before Mario's closes.
Mario's Ocean Club
Mario's Ocean Club specialized in American-catch seafood at reasonable prices, offering a $1 oyster happy hour and a $45 dinner for two every Thursday night. The deals and the quality of the seafood earned the restaurant our award for Best Seafood Restaurant on a Budget earlier this year.

With Mario's closing, Vega is turning his attention to his new venture, which is in the process of securing a lease in Littleton. He says it won't be a seafood restaurant, but instead he wants to capture the spirit of Lake Tahoe vacations that were an annual tradition for him and his family. He recalls cooking family meals in a big house overlooking the lake — meals and good times that were far more memorable than going out to dinner.

The new place is tentatively named Lake House Kitchen & Tavern, and it will specialize in American tavern food such as pressure-cooker fried chicken, prime rib and lake fish.

Vega has been getting the word out about the closing to regular customers at Mario's, and he says reservations for the final few days have been pouring in. He doesn't plan anything fancy for the sendoff, just spending time chatting with customers he's gotten to know over the past year.

Mario's Ocean Club is located at 560 South Broadway. Call 303-777-3474 for reservations and details about hours of operation through Saturday night.
KEEP WESTWORD FREE... Since we started Westword, it has been defined as the free, independent voice of Denver, and we'd like to keep it that way. With local media under siege, it's more important than ever for us to rally support behind funding our local journalism. You can help by participating in our "I Support" program, allowing us to keep offering readers access to our incisive coverage of local news, food and culture with no paywalls.
Make a one-time donation today for as little as $1.