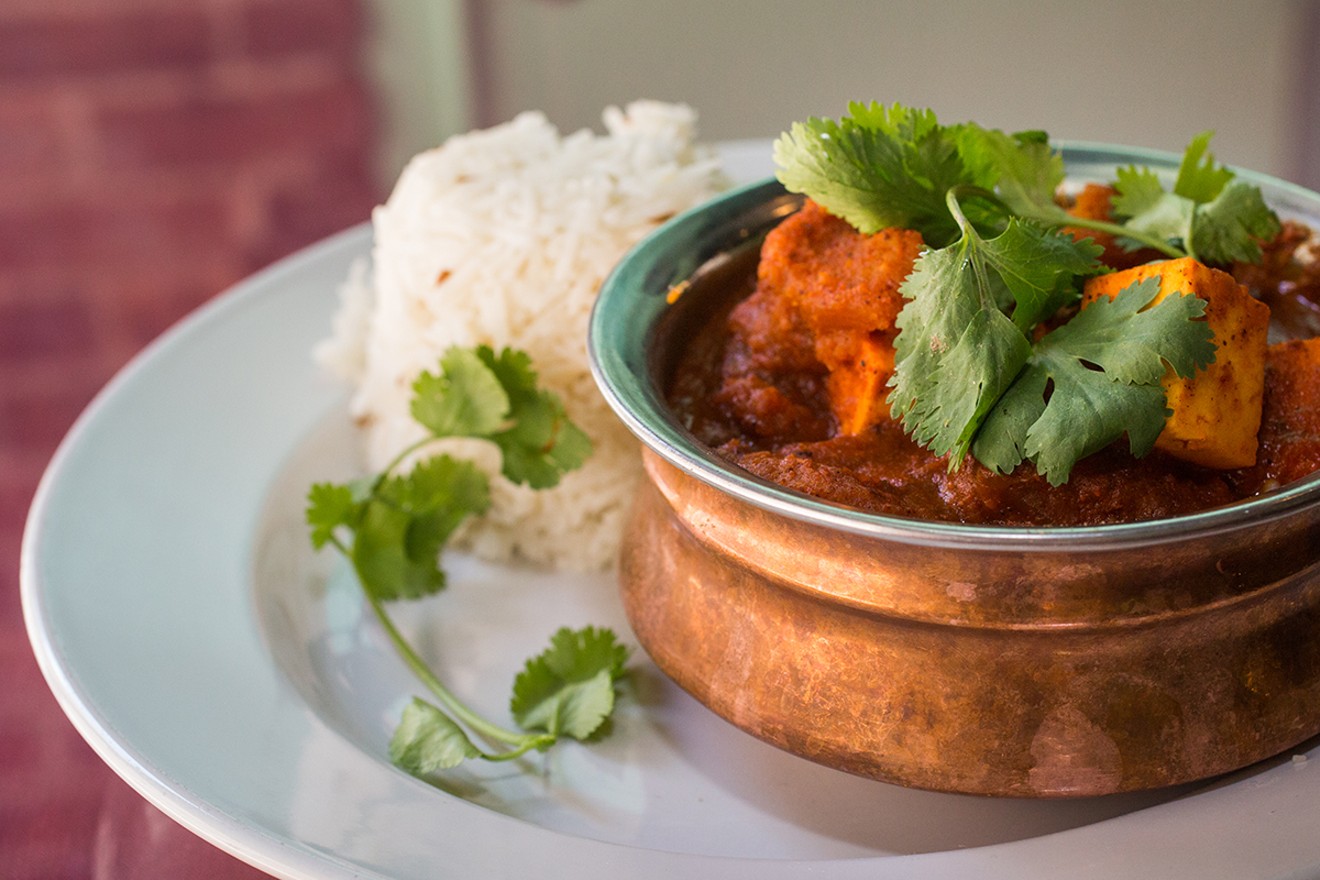 Paneer vindaloo is fiery, just as it should be. Danielle Lirette
Mint Indian Restaurant, which opened near the Colorado Convention Center last spring, didn’t make the best first impression. Then again, neither did my husband, and we’ve been together 28 years — so first impressions aren’t everything.

The sidewalk out front smelled like a bathroom. The bare-bones dining room had the awkward hush of a party before most guests have arrived. One of the few diners, a guy eating solo, put down his smartphone and stared, his gaze as intense as high beams. I thought about moving to the mezzanine if only to relieve the weight of his eyes, until I saw its garish mural of red parakeets and plants (a relic of the previous tenant) and decided to stay put. Not until the host came over and said he’d be our server did those first impressions give way to second, far better ones.

The server — the only one I had on my visits, Mint being a small-budget operation — was friendliness personified, with boyish black hair and a broad smile. If he minded answering questions about the lengthy menu, a compilation of dishes from various regions of India, he never let on. Was goat or lamb better in the biryani? How spicy was the rogan josh? What was the difference in the curries, listed by geographical names like Chettinadi and Hyderabadi, which mean everything if you’ve been to Chettinad and Hyderabad and precious little if you haven’t? We steered clear of Americanized crowd-pleasers like tikka masala and followed his advice, and the feast that followed confirmed my rapidly rising opinion of Mint. 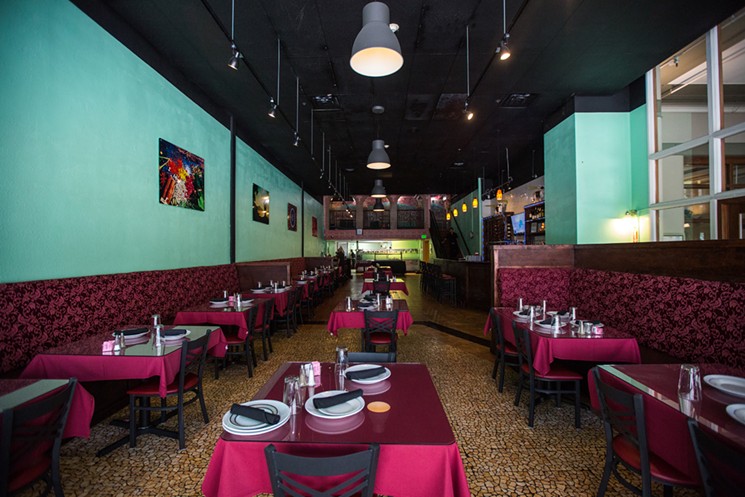 Inside Mint Indian Restaurant.
Danielle Lirette
Delivered in matching stainless-steel bowls with curved rims to keep in their thick, ruddy sauces, the Chettinadi and Hyderabadi curries appeared to be identical twins, looking nothing like the similar-sounding but brothier chicken curry with onions and tomatoes that I tried on a later visit. Each spoonful revealed subtle differences, though, until everyone at the table knew which one to pull closer, territorially, as bowls got low. The Chettinadi, named after a region in southern India, was a standout, extra intense from roasted spices, and fierce with black pepper and fennel seeds. Hyderabadi curry, named after a city in southern India, had a similar blend of spices, this one including cardamom, cinnamon and coriander (not surprising, since these and a dozen others make up the bulk of the Indian repertoire), but no single spice outshone the others. Even the peanuts were kept in check, giving the sauce body without the in-your-face nuttiness associated with, say, Thai satay chicken. Basmati rice with cumin seeds sopped up both curries after we’d polished off the proteins we’d chosen: chicken thighs and paneer, an Indian cheese with the texture of tofu.

The word “curry” is likely a bastardization of the Tamil word “kari,” meaning sauce; it has no connection to the bright-yellow curry powder in your spice cabinet. The closest equivalent to that in India would be garam masala, a blend that often includes cardamom, cinnamon, cloves and black peppercorns combined in as many ways as there are households. These nuances, plus the sheer number of spices needed for each dish, are what make cooking authentic Indian food at home so frustrating. Even when your spice cabinet is deep enough to hold asafetida and amchur (green mango powder), you’ll be stymied by others that are nearly impossible to track down, such as ratan jot, which is derived from a flower and is a traditional ingredient in rogan josh. Many restaurants in this country turn to paprika instead; Mint’s kitchen substitutes ground Kashmiri chiles, for a dynamite sauce as dark as ground-up bricks, with an earthy depth that fans of New Mexican red chile will adore. 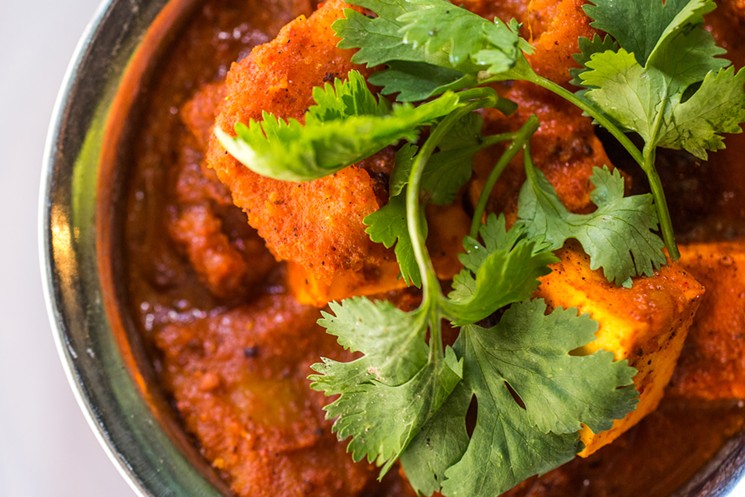 Danielle Lirette
But unlike paprika, Kashmiri chiles also come with a kick, and it’s precisely this kick, or rather the desire to moderate it, that’s been the Achilles heel of Indian food in America. On the omnipresent Indian buffet — a lunchtime staple in this country, though an anomaly in India — dishes are generally served mild to convince wary newcomers that the heat isn’t too much to bear. In the beginning, people assumed that “Indian food was spicy hot and they wouldn’t like it,” explains Mint chef/co-owner Guru Charan Hansda, who graduated from culinary school in Kolkata and has cooked in India and the U.S. for nearly two decades. (Mint is his first restaurant.) The concept of the buffet started, he believes, “so people can try it and come back and say it’s good.”

Decades later, though, heat is still a stumbling point for many diners, which is why dishes at Indian buffets are commonly served mild and why our amiable server at Mint was trained to ask how spicy we wanted the food when we ordered à la carte. But in India, the question of mild, medium or hot doesn’t exist. Dishes come as is; the ingredients that make Indian food spicy are the very elements that give it flavor.

This conundrum puts restaurateurs like Hansda in a bind: How to showcase Indian food at its best while making it accessible to the average diner? “I had to balance those things, but you can’t mellow down to zero,” he says. “Authentic dishes should not lose their soul.” That’s why Hansda, the youngest of seven siblings, who first learned to cook from his mother, errs on the side of soul. While Mint’s lunchtime buffet does stock standbys like aloo gobi (mild) and chicken tikka masala (also mild), the vast spread also includes spicier dishes. Saag paneer was plumped with so much cream it was nearly fluffy; a hefty dose of green chiles did wonders to offset the richness. Chicken biryani — similar to paella, with marinated meat, rice, spices and yogurt steamed together — was fiery, but the heat never torched the underlying mint and rosewater. A saucy eggplant dish known as baigare baigan, which is the traditional complement to biryani in Hyderabad, also had a kick; of all the offerings on the buffet, this is one I’d order on its own, with its enticing gravy of tamarind, crushed peanuts and coconut milk. 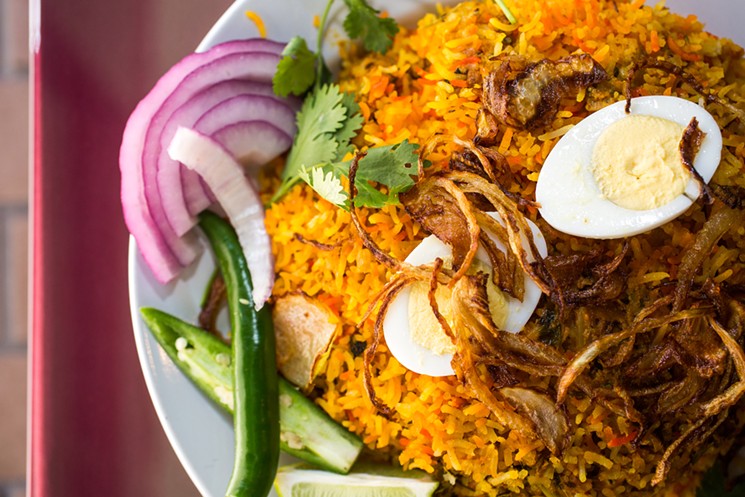 Danielle Lirette
Not all buffet favorites were spicy. Hansda offered dal makhani, a lentil-and-kidney bean dish, the way he’d made it at a restaurant in New Delhi, creamy and aromatic with cardamom. Doughnut holes called gulab jamun were as fun to eat as cookies dunked in milk. Soaked in coconut-flecked syrup, the fried spheres held their shape thanks to paneer in the dough, akin to ricotta in gnocchi or potatoes in pierogi.

Even good buffets like Mint’s come with challenges, though, from dried-out rice that sits too long to the reality of a spread skewed toward crowd-pleasers. If you stick to the buffet here, you’ll eat lots of chicken (in curries, biryani and a soggy, Indo-Chinese chili chicken) and miss out on more interesting fare like goat biryani, with meat braised until it’s soft as butter and fresh rice in every hue of yellow and orange; paneer vindaloo, which throttles your tastebuds with vinegar, red chiles and tamarind; and gobi 65, with battered cauliflower stained red from Kashmiri chiles, not the gloppy ketchup seen in some restaurants. And while plain naan comes with the buffet, you must order specialty breads off the menu — and you don’t want to miss Peshawari naan, a dessert variety filled with cherries, cashews and coconut.

But while I enjoyed my à la carte dinners at Mint more than my buffet lunch, in part because of the leisurely pace, in part because of the more flavorful and freshly prepared dishes, the buffet did have some appeal. Perhaps that’s because the large spread most closely replicates how Indian food was meant to be eaten: not solo, as we so often do in our individualistic Western culture, but in large families sharing numerous dishes with a variety of tastes. Rogan josh may be terrific, but it gets overwhelming if it’s the only thing on your plate; it works best with a little of this, a little of that. “My mom used to cook four, five veg dishes and one non-veg dish, plus papadum and pickles and salad,” recalls Hansda, “so it makes sense what you’re saying.”

Still, to get the very best impression of Mint, come with a group, ask lots of questions (your server won’t mind), order à la carte...and share the feast.