MobCraft Beer, which was founded in 2013, is known for crowdsourcing new beer ideas. Customers submit ideas that are then voted on publicly, and the ones with the most support are turned into actual beers. The concept has been a popular one in Milwaukee, so much so that the brewery is working on opening two additional locations, in Waterford, Wisconsin, and Woodstock, Illinois. But first, Denver.

MobCraft hired Derick Rivera as head brewer for the Mile High location. Rivera cut his teeth in the industry at Rockyard Brewing Company in Castle Rock, working his way up to head brewer and becoming a part of the team that won gold at both the Great American Beer Fest and the World Beer Cup. He later worked for the now-defunct The Peak in Winter Park and Upslope Brewing in Boulder before finding MobCraft. "The whole vibe of the brand itself, to collaborate, be creative, hit up the community — it's just a fun brewery," says Rivera. "They basically said make as good a beer as possible and have fun while doing it. It's sort of like a dream brewer job." 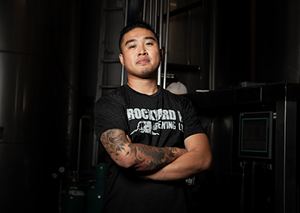 Derick Rivera is manning the mashtun at MobCraft.
MobCraft Beer
Rivera is using some of the old Liberati tanks, in addition to new ones. Since MobCraft is also sending out beers made at its Milwaukee location, there will be less day-to-day production pressure on Rivera, allowing him to fill some of the fermentation tanks with lagers,and giving them time to mature. Rivera says he's looking forward to making his mark on the local beer scene with IPAs.

While Rivera heads the brewing side, Pueblo-based Dee Tacko, which has been turning heads with its large, open-faced tacos, is running the kitchen. "The tacos bros, I like to say, my brother and I, started Dee Tacko, and we call them craft tacos," says Juan Herrera, co-owner of Dee Tacko. "We're trying to make a statement. I'm looking for a James Beard Award. I'd even love a Michelin star."

Herrera says that he really wants the kitchen team to understand what goes into the sauces and the tacos, to understand every step of the process. "We're going to hire two types of people: a dishwasher or a chef," he says. "I'm not going to hire prep cooks, because chefs are going to have to learn how to cook."

You won't find a lot of fast fried food from Dee Tacko, no matter who's making it. "I hate frying stuff. The only thing we fry here is our chips, because you want crunchy chips," explains Herrera. "I don't like all the grease. And besides, our tacos are gluten-free. Everything is except the queso." And that's because the queso uses MobCraft beer.

For the dessert menu, the team is working with Eva Spinale, who has over ten years' experience working in luxury hotels and restaurants. "My brother and I, our favorite dessert is Key lime pie," says Herrera. "I told chef Spinale, make whatever you want, but if you can make at least one key lime pie and give it your twist, great. She's half Italian and half French, so a lot of olive oil and a lot of butter, that's a great mixture right there." The debut Key lime pie is being served with a tequila whipped cream, giving it a Mexican flair.

Despite having separate crews for beer, food and dessert, there is a real synergy between the different areas. "One thing I told [MobCraft co-owner] Henry Schwartz, as soon as we open here, I don't want to sell any other beers in my other restaurants, just MobCraft beer," says Herrera. And the menu is full of MobCraft influence in more than just queso. "Our ranch, we use the Dee Tacko Mexican Lager. We're using Low pHunk, a sour beer, for the vinaigrette on the salad. We're getting it fresh, so hell, yeah." he notes. Even the pastry side is getting in on the act; Spinale is using the beer in some dessert items, including a MobCraft beer caramel sauce.

While Liberati did not succeed in this large space, MobCraft is hoping to succeed by taking a community approach, with multiple teams coming together to put out a cohesive, tasty offering.

Mobcraft Beer Dee Tacko is now open from 3 to 10 p.m. Monday through Sunday at 2403 Champa Street. Find out more at 720-773-7863 or mobcraftbeer.com.
KEEP WESTWORD FREE... Since we started Westword, it has been defined as the free, independent voice of Denver, and we'd like to keep it that way. With local media under siege, it's more important than ever for us to rally support behind funding our local journalism. You can help by participating in our "I Support" program, allowing us to keep offering readers access to our incisive coverage of local news, food and culture with no paywalls.
Make a one-time donation today for as little as $1.