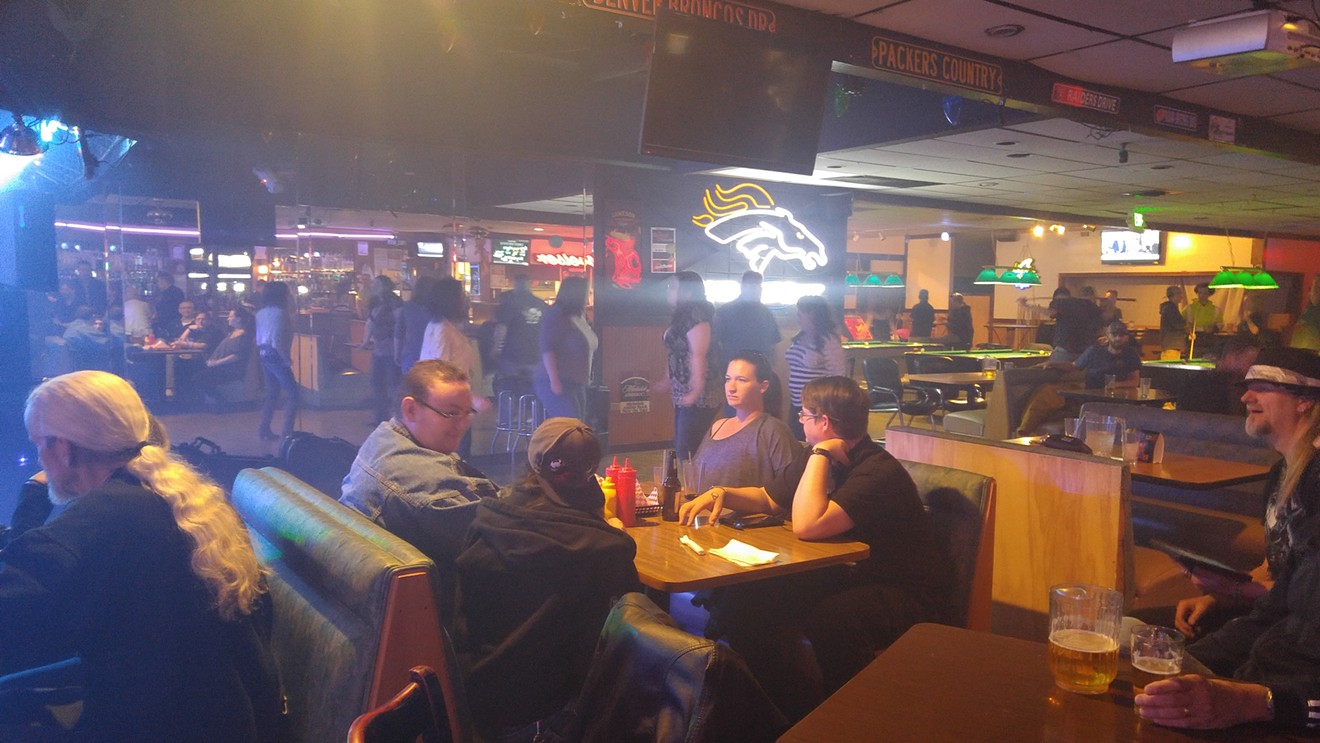 The party's getting started on a Friday night at Sweetwater Bar & Grill in Westminster. Sarah McGill
As I have previously mentioned, I will eventually run out of bars to profile if I don't get out to the ’burbs every so often. A friend of mine who lives in Westminster invited me to one of her local spots, Sweetwater Bar & Grill, at 9975 Wadsworth Parkway in Westminster, on a Friday night. According to her, Fridays and Saturdays are the best at the watering hole because of the live cover bands on those nights. I was intrigued, so I fought the urge to be lazy and stay home with my dog and a friend on a Friday night watching R. Kelly's Trapped in the Closet on YouTube. Instead, I paused the 33-part rap opera and made the trek up to Westminster. To be precise, to the strip mall off Wadsworth and Church Ranch Boulevard that is home to Sweetwater Bar & Grill, as well as trampoline attraction Jump City and a King Soopers.

As I got out of my car, an older dude smoking outside in clothes from the ’90s appeared to look at me with skepticism. He apologized, saying he didn't mean to give me the stink-eye, it was just the neon lights of the bar sign making him squint. To be fair, it was indeed a bright sign. As I entered the dark bar, I found my friend quickly; she was seated at a stool in the main bar area with a crew of regulars, including Brad Carmack, the owner of this establishment.

Things were relatively quiet when I arrived at around 8 p.m., with patrons clustered in the back of the large space playing pool and grouped around the bar area. The evening's band, which I soon found out is called Live to Tell and plays there often, was setting up on the small stage in the corner. A few groups and couples ate dinner in the pastel-colored booths that lined the dance floor and a back section of the bar. To go along with their dining experience, there was a huge TV playing episodes of Cops. The overall look of the bar is what could be described as functional and well-maintained, but likely not renovated since the ’90s. Aside from the pool tables, other bar attractions included the dive-bar staple "Bonus Hole" game seen at other bars like Kinga's Lounge and the Dirty Duck; one of those basketball shooting games you usually see at Dave and Buster's; a foosball table; a video golf game; and a jukebox, which blared David Allan Coe and other assorted country artists before the band took the stage. The crowd skewed older, with some folks probably in or approaching their seventies. Women with teased blond hair and jeans with sequins on the pockets mingled with guys wearing shirts emblazoned with the names of their employers, forty-year-old men wearing ornately decorated Affliction T-shirts with skulls and crosses, and the occasional older gentleman with a ZZ Top-worthy beard.

I caught up with my friend and with Carmack, who told me that he has only owned the bar for two years but that it has been a bar with some variation of Sweetwater in the name since the shopping center was built in 1983. Carmack owns and operates several gas stations and has been a restaurant manager, but only recently got into the bar business. He hasn't really changed much about the place since purchasing it, including the staff; some of the bartenders have worked there for more than ten years. The biggest difference is more consistent and frequent live music and a commitment to never charging a cover, ever. Carmack is also attentive to beating the prices of other bars in the area, and prides himself on affordable drinks and strong pours. I ordered a vodka soda, and it was at least half vodka and served in a pint glass, so he clearly wasn't lying about the strong pours. The bar also offers brown-bag mystery shots, a fun bar tradition that I usually chicken out of because I can't handle the smell of Jägermeister — and because odds are good that the mystery shot will be Jägermeister. The kitchen at Sweetwater serves up breakfast, lunch and dinner.
Sarah McGill
In talking with Carmack and company, I learned that the bar also opens somewhat early — 10 a.m. on weekdays and 9 a.m. on weekends — for the post-golf crowd from the three golf courses within a five-mile radius. Sweetwater's full kitchen serves huge portions of breakfast, burgers, Mexican food, and all kinds of greasy pub-grub staples. My friend says that there are three main waves of customers that come in regularly: the daytime crowd, the happy-hour crowd, and the late-night crowd. Daytimers consist primarily of retirees, Coors employees and postal workers having lunch on the weekdays. The happy-hour crowd apparently packs the place and is often a little younger, taking advantage of the 3-6 p.m. "half price everything" happy hour. The late-night group is a mix of bar regulars, younger folks playing pool, and, depending on the night, karaoke lovers and groupies of the featured cover band. Aside from the live music on the weekend, Tuesdays, Wednesdays and Thursdays are karaoke nights with someone named DJ URBz. When I heard this revelation, I told my friend I would definitely have to make the trek up again on a weeknight to sing some karaoke and meet this DJ URBz character.

Cover band Live to Tell hits the stage at Sweetwater Bar and Grill, complete with a fog machine.
Sarah McGill
But on the night of my visit, it was time for a dance party with the band. As Live to Tell began its set, the fog machine kicked on and gave the whole place a nice hair-metal ambience. The only thing missing was a wind machine and some mullets to blow in the breeze. Actually, there were mullets on some of the patrons, just not any of the bandmembers. Apparently the fog machine belongs to the bar, so every band that graces the stage gets to enjoy the smoky special effects. The set list was a mix of ’80s numbers from acts like Journey and Rick Springfield interspersed with a few more-recent hits by Daft Punk and the Weeknd. As the band played energetically, couples and small groups of women hit the mirrored dance floor, including my friend and I, if the song was good. I also seemed to be a big hit with the men in the place, as one of the few women under forty in attendance, so I shared a few awkward dances with some of the older guys, because it seemed like the thing to do.

We stayed at the Sweetwater for a while, chatting with Carmack and the friendly posse of regulars who seemed intent on buying me drinks, dancing, and generally having a good time. I also needed to hang around a while to sober up from that rather intense vodka soda I drank. So we didn't quite close out the bar, but we did see the crowd grow and get a bit drunker as the night wore on. After chugging a little more water, we headed out, and I steeled myself for the trip back home. I envied my friend the two-minute drive to her house — one of the perks of drinking at a neighborhood bar that's actually in your neighborhood. But even if Sweetwater Bar & Grill isn't next door to you, it's worth a visit if you want to experience an extremely affordable, incredibly friendly night out, Westminster style.