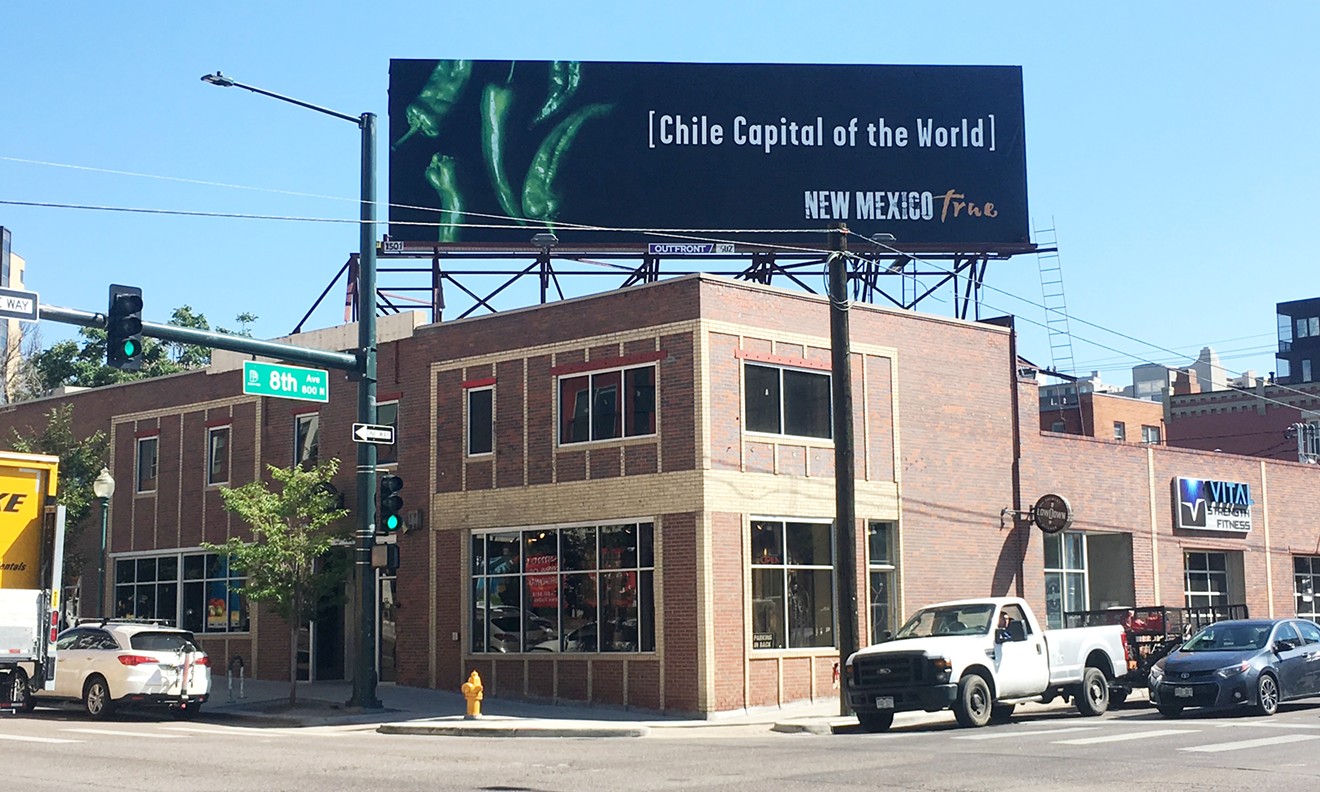 New Mexico is feeling a lack of confidence. Mark Antonation
We were planning on playing nice, to give credit where credit is due. But New Mexico, that green chile bully, had to go and kick sand — or at least parched Southwestern soil — in our face.

It's not enough that New Mexico devotes ten times as much acreage to chiles as does Colorado, or that canned chiles proudly sporting the Hatch brand sit on grocery store shelves from coast to coast, when Pueblo's finest  are rarely found outside the state. That's why Governor Jared Polis gave Whole Foods a shout-out for finally stocking Pueblo's finest, "the best chile in the world."

But Michelle Lujan Grisham, governor of New Mexico, couldn't leave it at that, and continued the war of the words with this tweet: "If Pueblo chile were any good, it would have been on national shelves before now. If Colorado wants to go chile to chile, no question that New Mexico can bring the heat — Hatch chile is, has always been and will always be the greatest in the world."

After a few more salvos, the two governors agreed to have a still-to-be-scheduled showdown between Hatch and Pueblo chiles.

But in the meantime, the Land of Enchantment has taken the fight to the very streets of Denver. A billboard just popped up at the corner of Eighth Avenue and Lincoln Street (on top of a Colorado craft brewery, no less) with the words "Chile Capital of the World" above the "New Mexico True" tourism slogan and logo. Verdant pods spilling onto a black background grace the gigantic ad, the agricultural equivalent of Soviet agitprop during the Cold War.

This isn't a cold war, though: It's hot. Very hot. And now New Mexico is escalating the competition and taking jabs at Colorado ("our less fortunate neighbors to the north," the narrator coos, over an image of a Colorado license plate) with promotional videos for its green chiles on YouTube, too:


Is New Mexico suffering an identity crisis, a Napoleon complex of Southwestern proportions? Surely if these are the best green chiles in the world, there's no need to hawk the product like some street corner barker.

Colorado Governor Jared Polis agrees. "The fact that they have to design a promotional campaign in support of their chiles shows how superior the Pueblo chile is," the governor says. "Our Pueblo chile promotes itself. Granting yourself a title doesn’t simply make it true. One thing is for certain, Coloradans know the Pueblo chile is the best chile in the world.”

In fact, even the New Mexico Department of Agriculture acknowledges that the state's green chile harvest has been on the decline for years. But volume isn't everything; quality matters. That's why we recently tested Pueblo hot against their Hatch counterparts — and the Pueblos won in a photo finish.

Fall is prime green chile season, with farms down south trucking up their best product through September and October. Sure, you could stick with your tried-and-true Hatch classics, but why give in to consumer marketing tactics when your tastebuds can sort out the the truth?

When it comes to green chiles, Colorado, go Pueblo or go home.
KEEP WESTWORD FREE... Since we started Westword, it has been defined as the free, independent voice of Denver, and we'd like to keep it that way. With local media under siege, it's more important than ever for us to rally support behind funding our local journalism. You can help by participating in our "I Support" program, allowing us to keep offering readers access to our incisive coverage of local news, food and culture with no paywalls.
Make a one-time donation today for as little as $1.