Chantel Columna (left), Tamir Danon, and Ayana Coker own Novel Stand Brewing. Tamir Danon
A brewery should be a place where everyone feels comfortable. “There shouldn’t be constraints based on your race or your ethnicity, or what language you speak or who you want to kiss,” says Tamir Danon. “Nothing should make you feel alienated in the brewing community. If you are from a place where they don’t drink craft beer but now you want to do it, you should. Being interested in beer is for everyone.”

It’s a nice thought and a noble goal, but not yet a reality in Denver. Still, Danon, along with Chantel Columna and Ayana Coker, wants to start somewhere. Today the three signed a lease at 305 West First Avenue, in the Baker neighborhood, where they plan to open Novel Strand Brewing sometime next year. The 2,064-square-foot brewery will be only be open Thursdays through Sundays to start with, and a coffee shop, which will be run by another owner, will occupy the space in the morning and daytime hours.

Danon acknowledges that the three will make some history in Colorado. While Danon, who was born in the United States and raised in Israel before his parents moved to New York in 2001, is white, Columna, who was raised in the Dominican Republic, and Coker are both black; Columna is also Latina. They are among the first, if not the very first, African-Americans to have an ownership stake in a brewery in Denver, or even Colorado.

But Columna and Coker aren’t interested in being known as the first black (and/or Latina) brewery owners in Denver, Columna says. They are simply “brewery owners who happen to be black, and happen to be women.... It shouldn't matter what anyone looks like, what they feel, or where they come from. It's beer. It's for everyone," she says.

That's definitely true for this trio. Danon and Columna (who have been dating for six years) and Coker all met as undergraduate students at Rensselaer Polytechnic Institute in Troy, New York. “What brought us together is beer. We have all loved beer and enjoyed it together,” Danon says. 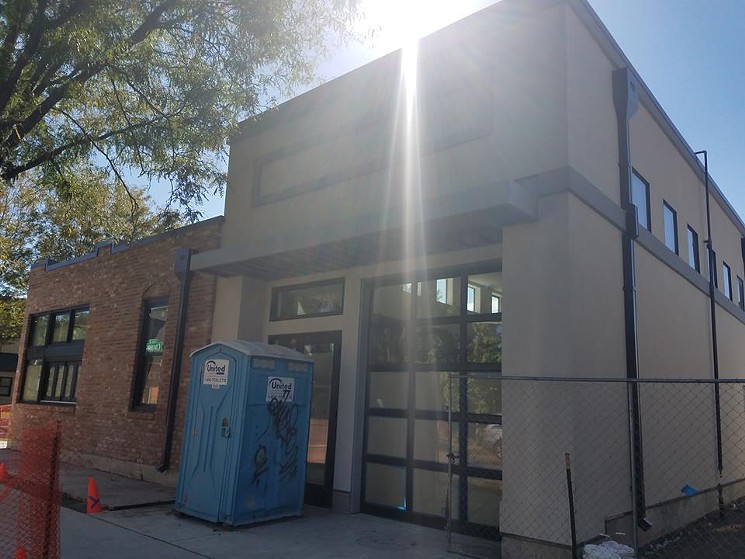 The future home of Novel Strand Brewing.
Tamir Danon
For years, he and Coker would drink beers at the Ruck, a Troy craft beer bar, and joke about starting a brewery together one day. “That was the dream. I was home-brewing a lot, home-brewing awesome beer.... Eventually, the joke stopped being funny and started being real.” After graduation in 2012 (with degrees in biochemistry and biophysics), Danon returned to grad school, where he wrote his thesis on brewer’s yeast. Then, after working in New York for a while, he and Columna decided to move to Colorado.

“We thought about New York City, San Francisco and some other great beer cities. But those are not sustainable,” Danon says about the cost of living. And while Denver isn’t cheap, it stood out because Danon has family here and because it is a market where consumers are well-educated and accepting of craft-beer culture. “We know we won’t shock everyone, because they will be familiar with the beers we are doing.”

Danon plans to brew a wide variety of beers, including a signature 3.8 percent ABV oatmeal milk stout with vanilla beans, along with some hoppy ales. “We like sessionable beers, and we want to pack in as much flavor as we can,” he says. But he also has a penchant for wild and sour ales made with Brettanomyces yeast.

“I bought a [small] five-barrel system on purpose,” he says, explaining that the small size will allow him to make a wider variety of beer more often. “I bought three different-sized fermenters on purpose. I want to brew what I feel like brewing. If I wake up and feel like doing a dry-hopped sour, then I want to make it.”

Danon also enjoys working with other breweries. He has already done collaborations with two other breweries in town — Call to Arms and Mockery — and says he plans to collaborate more once Novel Strand opens.

His other goal, though, is to create a comfortable place in the neighborhood where everyone is welcome. “We are looking to do what you often see in Europe, to be a small place that specializes in a few things and endears themselves to the neighborhood,” he says. “In Baker, we're surrounded by people more than anything else. We want those people to have nice place to hang out — a place where they're comfortable.”