Odell and Left Hand Bring Back Bottles as Can Shortage Grows The bottle is back. Odell Brewing
There was a lot of grumbling at Odell Brewing in 2015 when the Fort Collins beer maker finally started using cans instead of bottles for some of its offerings. There was even more grumbling the next year at Longmont's Left Hand Brewing when it decided to do the same thing. Although both breweries — two of the state's oldest — had sworn to stick with their favored glass containers, they eventually capitulated to the can demand.

It's no surprise, then, that Odell and Left Hand are now asking Colorado can drinkers to dig their bottle openers out from the backs of their kitchen drawers. Both are dusting off their bottling machines this winter as a nationwide can manufacturing capacity shortage — known as the "candemic" — has caused craft breweries to scramble in search of aluminum. The shortage is a result of shutdowns and social-distancing rules, which have forced breweries to forsake draft lines in taprooms and restaurants in favor of selling their liquid assets to go or on store shelves.

"We were all ready to put 2020 in the rear view, but this year had one more thing to throw at us: a nationwide can shortage," Left Hand Brewing explains on its Instagram page. "That’s right, America is running out of aluminum cans. So, what do you do when you can’t find cans for beer? You get creative. We're putting select beers in bottles for the first time ever." Peanut Butter Milk Stout, for instance, which debuted in January and has only ever been sold on draft and in cans, will now be hitting shelves in bottles, as well. It's very retro.

At Odell Brewing, spokeswoman Kristen Woods says the bottles "are temporary until the aluminum can supply has re-stabilized. We have the ability to bottle, so we're leaning into it for the time being." The brewery has even created the hashtag #thebottleisback to help promote the idea and educate customers.

One of the first beers to hit shelves in bottles: Lugene Chocolate Milk Stout, a fan favorite that debuted in 2012 before being discontinued. "Of course, we were going to have it in six-packs of cans, but pivoted to a bottle release," Wood explains. "We're very fortunate to have a bottling line." (Side note: Lugene is one of the most delicious chocolate beers on the planet, and it's about time Odell brought it back — bottle or not!) 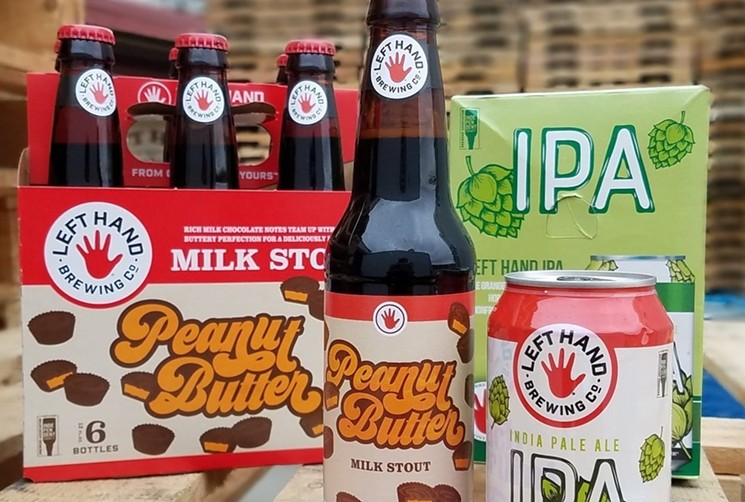 Left Hand Brewing
The demand for cans has created a backlog at manufacturers like Golden's Ball Corporation, but there's no shortage of aluminum itself. Signs that suppliers couldn't keep up first cropped up in July as pandemic-based restrictions entered their fifth month. How behind are they? Ball told investors in early October that the shortage is in the vicinity of ten billion cans, according to the Washington Post.

At the time, the Brewers Association warned its members to carefully watch their supply. "The last several years have seen a dramatic shift to aluminum cans as the preferred package for craft beers," the BA wrote. "Early data shows that in 2020 aluminum cans have become the majority package of choice for craft brewers. The shift in consumer and producer preference to aluminum cans has not been limited to beer. Soft drinks, seltzers, waters, coffees, kombuchas, energy drinks, and other segments of the beverage industry have also seen a shift to cans as the preferred packaging type. Canned wines and cocktails are further competitors for cans."

Since then, a variety of craft breweries, big and small, have made adjustments. Ska and Oskar Blues, for instance, are wrapping empty cans of discontinued or under-selling beers in new labels (instead of recycling them). Other breweries are shifting to unusual can sizes or shapes — whatever they can get a hold of.

Ironically, 2020 is the year that canned beer production was predicted to finally exceed bottled beer production in the United States. “Cans were 47 percent of craft packaged production in 2019...and I’m forecasting that they will overtake bottles in sales in 2020," BA economist Bart Watson told American Craft Beer last January. And that doesn't even include small breweries selling cans out of their taprooms.

Luckily, Ball, which just signed a deal to the naming rights for the Pepsi Center, is on track to build two new can manufacturing plants in Pennsylvania and Arizona that should come on line in 2021.
KEEP WESTWORD FREE... Since we started Westword, it has been defined as the free, independent voice of Denver, and we'd like to keep it that way. With local media under siege, it's more important than ever for us to rally support behind funding our local journalism. You can help by participating in our "I Support" program, allowing us to keep offering readers access to our incisive coverage of local news, food and culture with no paywalls.
Make a one-time donation today for as little as $1.