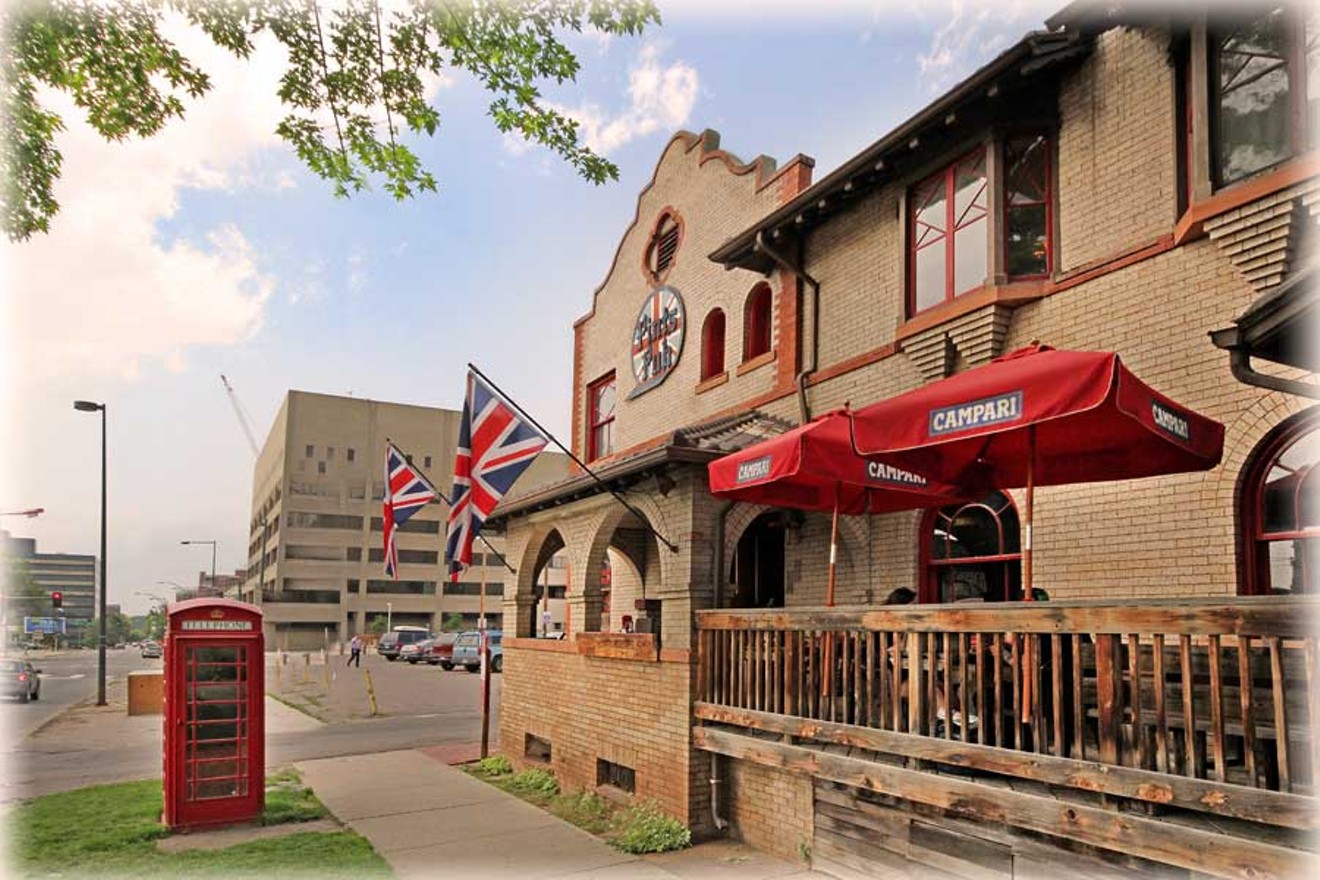 Pints Pub, including the trusty phonebooth outside, has been at 221 West 13th Avenue since 1993. Westword
Pints Pub, at 221 West 13th Avenue, is a landmark of sorts in the Golden Triangle, the sliver of land in the shadow of the Capitol, bordered by the arteries of Colfax, Speer and Broadway. Cruising by on West 13th Avenue, I am always reassured to see the familiar red phone booth and Union Jack flags of Pints Pub. I have been into the bar several times over the years, many of them on dates, and decided to keep that streak going by bringing a Tinder date to join me for some bar research on a Monday night. (Don't judge me for going on a Tinder date on a Monday night; sometimes that's just how my schedule works.)

I have always enjoyed the thoroughness of how British Pints is. On this visit, I discovered the reason: owner and self-described Anglophile of Irish ancestry Scott Diamond's commitment to all things English. Diamond, who previously owned the Dozens location across the street and still owns the other Dozens in Aurora, and also used to run the York Street Cafe (which is now the Three Lions) has been in the restaurant business here for quite a while. He bought the Pints location, which previously housed run-down apartments, in 1993 and built the bar from top to bottom with great attention to detail. From obtaining not one, but two authentic phone booths in a process that involved a crane, a truck and a trip to Virginia, to importing rare and authentic bar billiards games that were only built for one year (1939) for pubs in southern England, to installing European-style toilets with pull chains, it's all rather impressive.

Also imported from England are the brewing materials needed to make the cask-conditioned ales and other in-house brews served up at Pints. When setting up the brewing operations, Diamond and company came up with the brilliant idea to create a see-through section in the floor with a view of the basement brewery equipment, only to discover that a chain of pubs in England was doing the same thing across the pond at the exact same time. Diamond even hired local artist Tom Scarborough to make huge murals on the dining-room side, including one of London's Big Ben, with the hands on the clock set to the time of Winston Churchill's funeral. Another notable mural was painted by artist Scott Robinson, designed to look like an extension of the bar, with a scene of bar patrons, including a likeness of a former regular named Richard.

This scene on the wall in the dining room at Pints Pub transports patrons to London.
Sarah McGill
My date and I were seated at a table not far from the aforementioned mural, grabbing some of the house brews and chatting. The beers were probably the best option, because the impressive selection of single-malt whiskey that Diamond later told me is the largest in the world seemed a little intimidating, at least to me — though it's worth noting that the whiskey flights on the menu are referred to with names by "Masters Level Course" and "Freshmen," so I suppose I could have learned some things that would help me find my way around a bottle of single malt. The whiskey bottles hang atop every inch of the bar in optics, special pouring mechanisms that guarantee an even pour and are required by law in the U.K.

We scanned the food menu with its wide variety of British fare and settled on a burger and a turkey sandwich called the "Bird in Hand," which both came with thin, crispy fries. My companion and I both gave the meals two thumbs up. It was a rainy night, and the bar felt cozy and warm with all the little nooks and crannies and wooden booths. The place wasn't too crowded downstairs, with only scatterings of young couples and trios of friends, but a large group filled a table in one of the open areas on the second floor.

Things were empty in the "Jury Room," which Diamond legitimately made with actual court juries in mind. The room can seat a full jury, plus two alternates, and two court staff. It's not so common anymore, but back in the earlier days of the restaurant, Pints occasionally received requests from the Denver County Court to reserve a private room for jurors unable to talk about a case with anyone. Nowadays you're more likely to find a private party or business meeting in the Jury Room. When the weather is colder, Diamond and staff also host whiskey-tasting events upstairs for folks who have joined an email list for whiskey enthusiasts.

The collection of single-malt whiskey at Pints Pub, complete with special devices called optics to ensure a standard pour that would be legal by British standards.
Westword
The crowd at Pints Pub varies from day to day and time to time, and isn't always a neighborhood one. The area surrounding the bar, in Diamond's words, "hasn't quite filled out" as a neighborhood, and the bar is definitely in a bit of a government jungle, with the Capitol, the City and County Building, various other courthouses and the Mint taking up much of the nearby real estate, along with the Denver Art Museum and the newer Clyfford Still Museum. Diamond notices that people come from all over the city because they appreciate the vibe of the bar, the food or the single-malt selection.

He keeps things plain and simple, without a lot of convoluted specials or weekly events, just a basic happy hour that is actually a great deal, with $1 wings and $1 crisps (British English for what we Americans call chips), and $1 off wells, house wines, and specialty cocktails from 4 to 6 p.m. as well as half-price growlers of beer with any meal on Sundays.

Diamond prides himself on creating a comfortable bar atmosphere that revolves around conversation and connection over a pint or some fish and chips rather than televised sports and large groups of bros getting rowdy with rounds of shots. Maybe that's why I keep finding myself there on dates. As the evening continued and we got ready to leave, various other scenes of my life in Denver came to mind — past dates and meetups with friends at Pints Pub, the time my friend and I tried to get into the packed bar when there was a line out the door after the Women's March last January — and I felt old. But I also felt oddly comforted. It seems like whatever happens in this town, and whatever happens in my life, Pints Pub will still be here, bringing a taste of England to the citizens of the Queen City without an actual Queen.