Call to Arms was the first to change its Putin beer name. Call to Arms Brewing
Just a few weeks after Call to Arms Brewing announced that it planned to rebrand one of its best-selling beers because it had been facetiously named for Russia's Vladimir Putin, two other Colorado breweries have decided to make similar name changes in an effort to show support for Ukraine.

Last week, Diebolt Brewing posted a notice on Facebook saying that it will rename Vladislav, Baby Don't Hurt Me, its highly lauded barrel-aged Russian imperial stout, because it features a photo of Putin holding a boombox above his head. "For years we’ve always thought it was enough to make fun of the Russian dictator on the labels," the brewery said. "It might have been acceptable then, but it’s not acceptable now."

But since the beer and all of its variants are currently in cans at the brewery and in liquor stores — and will be for a while — Diebolt is covering up Putin's face with a circular Ukrainian flag sticker. It's also offering the stickers to liquor stores so they can cover up Putin's face, too, if they want to.

"And when we roll out [the beer] again in November, it will be boasting a new brand, sans this dickhead," Diebolt added. Interestingly, this is the second time the brewery has had to change the name of the beer. In 2017, Ballast Point Brewing, then owned by Constellation Brands, forced Diebolt to ditch the beer's original name, The Commodore, because it had a trademarked beer by the same name. 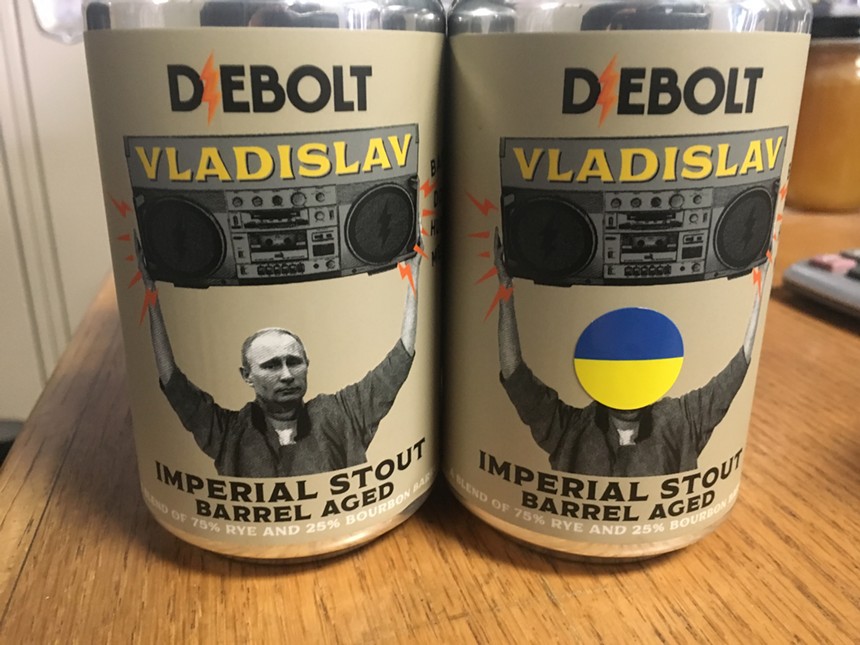 Diebolt Brewing is putting Ukraine flag stickers over Putin's face.
Diebolt Brewing
Farther west, Cannonball Creek Brewing in Golden said on March 18 that it has renamed its much-loved Brut IPA, Vladimir Brutin, as Olivia Bruton-John. The beer is very well known, having won multiple medals at the Great American Beer Festival over the years, as well as awards in other contests.

For its part, Call to Arms said on March 2, right after Russian invaded Ukraine, that it would change the name of its Czech dark lager, Shirtless Putin Catchin' Rays.

"As y'all know, we typically make it a point not to take ourselves too seriously because, at the end of the day, we're fortunate enough to be working in the beer industry," the brewery wrote on Facebook. "However, in light of the escalating war taking place in Ukraine, all jokes aside, this is a serious matter."

First brewed in 2016, Shirtless Putin was intended to make fun of Russian propaganda, in particular when Putin posed for shirtless photo ops while swimming with dolphins and on horseback. "And while the intent is still the same, [we] in no way wish for that beer to be misconstrued as supporting the Russian president or his actions, as [we] stand with the people of Ukraine," Call to Arms wrote.

Cannonball Creek is changing the name of Vladimir Brutin, visible on the menu board.
Cannonball Creek Brewing
A new name hasn't yet been picked, and since Call to Arms will still have the beer for sale until its labels run out, it will donate $1 from every six-pack to UNICEF's fund to help children in Ukraine.

This wave of rebranding isn't the first time Russia has caused trouble when it comes to craft beer names. Back in 2017, during the beginning of Russia's campaign to meddle in U.S. elections and spread false information on the internet and social media, Renegade Brewing decided to ax the name of its  Hammer & Sickle Russian Imperial Stout, which took its moniker and design from the flag of the USSR. The beer, now simply called Hammer, is no longer canned and has no imagery.

"Obviously, our country is having some issues with Russia right now, and I don't want to send mixed messages to the market. In no way are we supportive of Russia or Communism or anything they are doing," Renegade's then-owner, Brian O'Connell, said at the time.

Perhaps the lesson here is to stay away from Russian politics or political figures in beer.
KEEP WESTWORD FREE... Since we started Westword, it has been defined as the free, independent voice of Denver, and we'd like to keep it that way. With local media under siege, it's more important than ever for us to rally support behind funding our local journalism. You can help by participating in our "I Support" program, allowing us to keep offering readers access to our incisive coverage of local news, food and culture with no paywalls.
Make a one-time donation today for as little as $1.