Jump on the Birria Bandwagon at This Federal Boulevard Food Truck You read that right: The latest food trend — driven in part by social media photos — is a style of birria that originated in Tijuana, Mexico; found fame on the streets of Los Angeles, and has since spread all over the U.S. Part of the fun is the massive amount of cheese that glues birria tacos, quesadillas and tortas together; the other part comes from the irreverent addition of ramen noodles to form a fusion that hasn't fueled so much furor since Roy Choi gobsmacked the City of Angels with Korean tacos back in 2008. 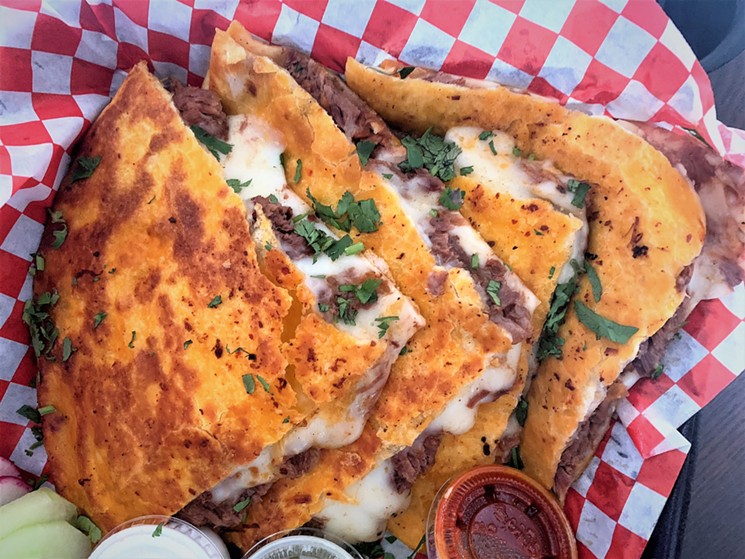 Kiké's makes decadent birria quesadilllas.
Mark Antonation
While all those photos look tempting, you can't taste birria on Instagram. Fortunately, Denver's food trucks haven't slept on the trend, and one in particular has made birria de res a specialty. Kiké's Red Tacos has been parking at 3010 Speer Boulevard (in the parking lot of Old Liquor) for the past three months, serving a menu devoted to the many permutations of beef birria.

Traditional birria comes from the state of Jalisco, and is often made with chivo (goat), but a separate style evolved in Tijuana with beef as the primary protein. The meat is slow-cooked until it shreds easily, and is often served in a bowl with the consomé ladled over it, or served with tortillas and the broth on the side for sipping.

Birria de res has more fat than birria de chivo, and the bright-orange slick atop the consomé invites dipping. The new wave of birria purveyors dip corn and flour tortillas in the fat first, giving the resulting tacos and quesadillas a vivid hue — and a punch of flavor. Kiké's sells straight-up birria tacos with a side of consomé, or you can get quesa tacos (often called quesabirria by other vendors) if the combo of cheese, chiles and beef is what you're craving.

But don't leave without an order of birria ramen, which Kiké's serves topped with a gooey wad of white cheese. It's not especially brothy compared to some versions, since the noodles soak up much of the liquid, but the heat and flavor of the consomé come through. 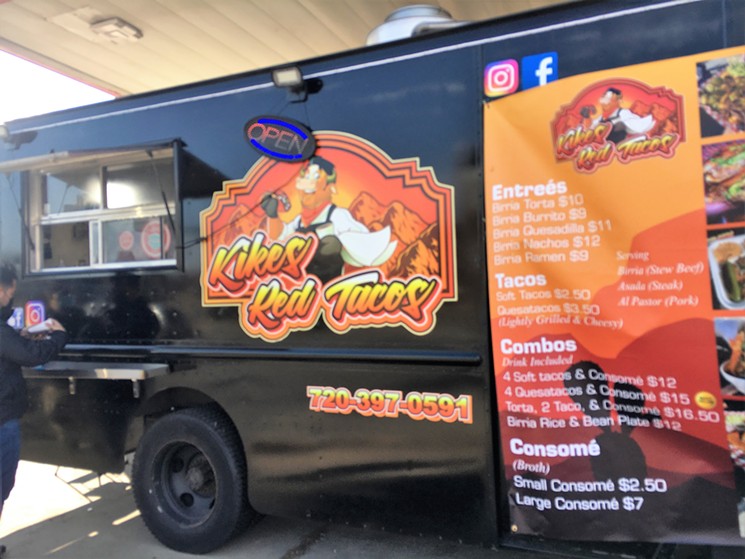 Find Kiké's at the northwest corner of Federal and Speer boulevards.
Mark Antonation
While Los Angeles seems like a credible birthplace for this culinary mashup, many sources point to celebrity chef Antonio de Livier, who runs restaurants in Guadalajara and Mexico City, as the inventor. But Tapatio (the hot sauce company) launched its own line of instant ramen noodles in a cup (which aren't specifically birria-themed) in early 2018, and many food-truck operators use this brand as the base of their birria ramen, combining their own consomé and beef with Tapatio's noodles and spice packet.

Kiké's isn't the only birria de res purveyor in town; you can also track down versions from La Unica Birria de Res (a food truck at 5000 Crown Boulevard, next to Montbello High School), Ronin Kitchen (a delivery-only ghost kitchen), and Pancho's Birria y Mas (which parks at 6400 West Alameda Avenue in Lakewood).

Where have you found great birria de res, quesabirria and birria ramen? Let us know in the comments, or tag your social media photos with @denverwestword and #denverwestword.
KEEP WESTWORD FREE... Since we started Westword, it has been defined as the free, independent voice of Denver, and we'd like to keep it that way. With local media under siege, it's more important than ever for us to rally support behind funding our local journalism. You can help by participating in our "I Support" program, allowing us to keep offering readers access to our incisive coverage of local news, food and culture with no paywalls.
Make a one-time donation today for as little as $1.