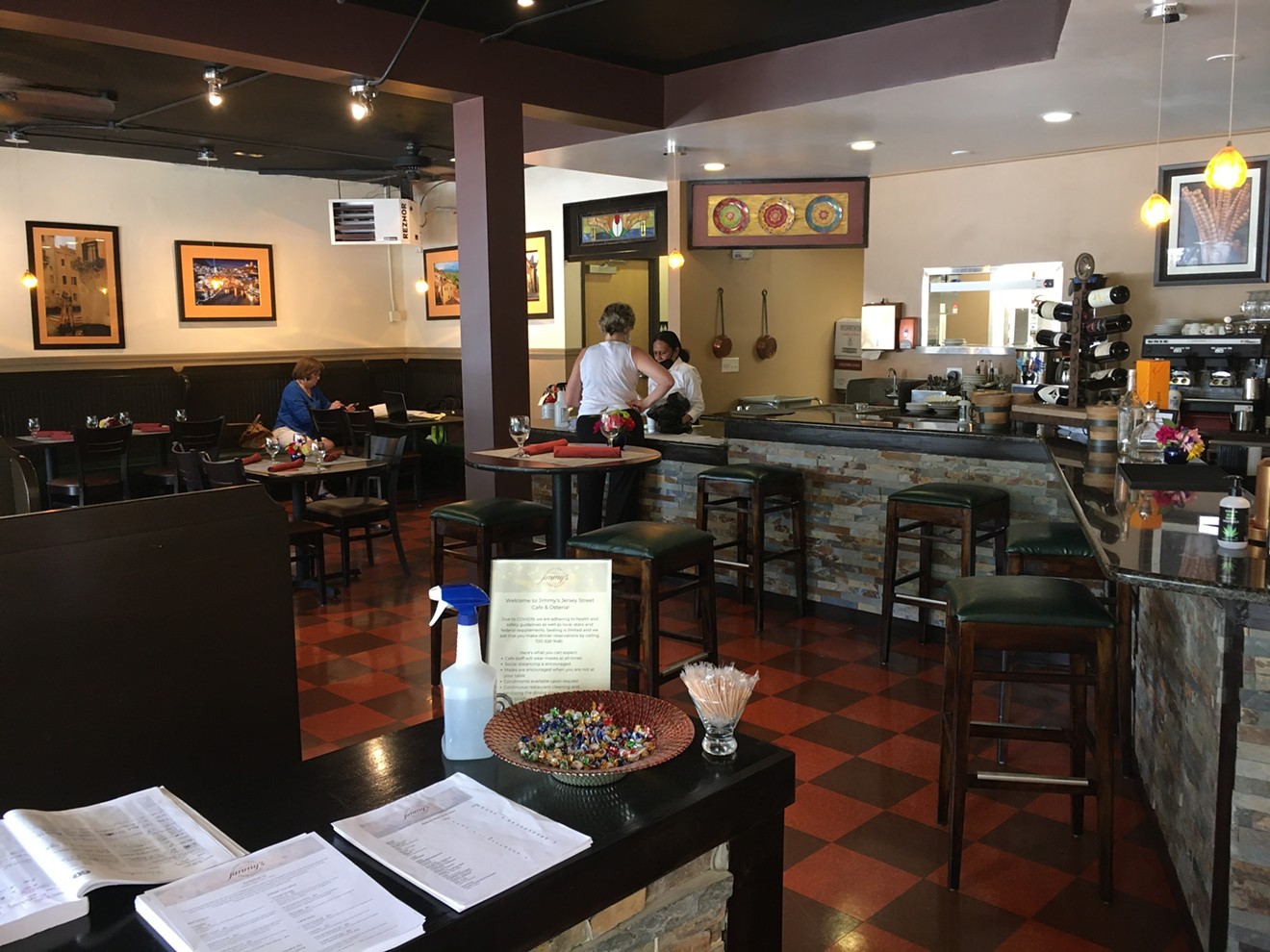 Inside Jimmy Lambatos' new restaurant in the Mayfair neighborhood. Mark Antonation
Jimmy Lambatos has seen and done just about everything during his 45 years in the restaurant business: served late-night dinner to rock stars, launched a national sandwich chain, appeared pants-less on a commercial that aired during the Super Bowl. But until now, he'd never opened a restaurant during a global pandemic. His assessment? "With the coronavirus and my low expectations, we're actually doing so much more than I thought we would," he admits. "The neighborhood has embraced us so much, we've actually done about twice the business that I thought we'd be able to."

Not that things were easy for Lambatos as he turned the former home of the original Copper Door Coffee Roasters (which now has two other Denver locations) into Jimmy's Jersey Street Cafe & Osteria, a quaint little eatery nestled in an aging shopping strip in the very quiet Mayfair neighborhood. Even before the pandemic, explains, the city was requiring more paperwork and inspections than he'd ever before encountered, despite all his previous experience in Denver. "You can't just take over a restaurant and flip it without the city needing everything up to code: electrical, oven hoods, fire suppression, zoning," he points out.

What started at the tail end of 2018 turned into a year and a half of construction that combined the coffee shop and a fitness studio next door into one restaurant space. This past March, Lambatos was finally ready to open, and then COVID struck. Getting a certificate of occupancy wasn't going to happen while restaurants were closed to in-house customers, so he waited — until June 22, when he finally opened for business with tables and booths spaced far apart in the dining room and a small patio facing Jersey Street at the front of the restaurant.

Lambatos's entire career has been one of ups and downs, a familiar story for restaurant-industry lifers. He moved to Colorado from New York in 1970 and landed a job at the legendary Colorado Mine Company in Glendale (where Elvis Presley stopped in for giant peanut butter, jelly and bacon sandwiches), and then in 1978 opened his first restaurant, Footers, at East 11th Avenue and Ogden Street, with business partner Todd Disner. Footers closed ten years later, but the catering company of the same name is still running, now operated by Anthony Lambatos, Jimmy's son. 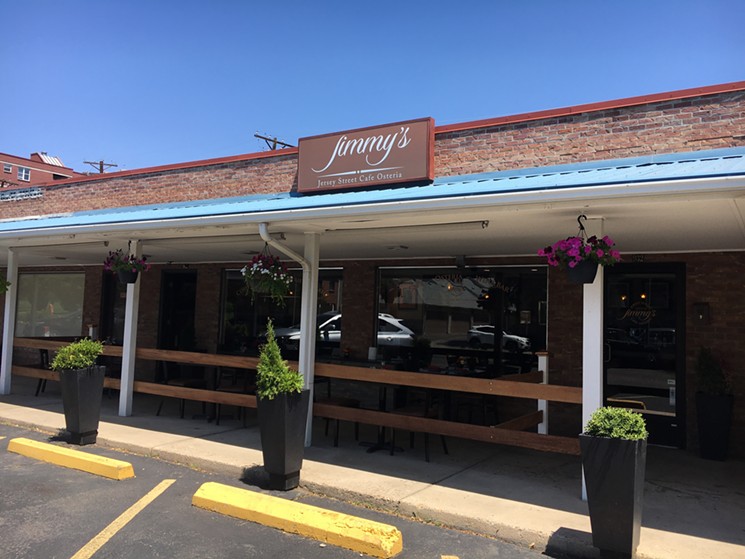 Jimmy's has outdoor seating for summer weather and social distancing. Screens drop down in the evening for a little extra shade.
Mark Antonation
Then came Quizno's — and yes, the sandwich chain's name had an apostrophe back when Lambatos and Disner opened the first location at 1275 Grant Street in 1981. "I came out from New York, where they had these sandwiches on crusty Italian bread," Lambatos recalls. "When we first started, we used Baker's Pride pizza ovens...and high-quality Italian bread, but they couldn't keep up with the number of customers."

So Quizno's switched to conveyor-belt ovens and began to franchise — as the partnership fell apart. "My partner and I split over a lot of disagreements," Lambatos says, noting that the two went their separate ways in 1988 and eventually sold to a Quizno's franchisee, Rick Schaden, in 1991. (If the name sounds familiar, that's because Schaden went on to co-found Smashburger.)

"But I learned early on that you meet the same people on the way up the ladder as on the way down," Lambatos adds. "So you never burn your bridges."

Schaden and Lambatos kept in contact, and in 2002 Schaden reached out to the former Quizno's owner to recruit him for an ad campaign. The result was the "Chef Jimmy" commercial, in which Lambatos appears as the company's culinary leader so dedicated to sandwich perfection that he forgets to feed his parrot, water his lawn and put on pants — making for a brief but memorable TV run and a spot during Super Bowl XXXVII in 2003.
"They flew me out to Los Angeles to make the commercial," Lambatos remembers. "Next thing you know, I'm having lunch next to Tyra Banks. I ended up on Jay Leno...and David Letterman." (A California equity firm now owns Quiznos — but the original is still open at 1275 Grant.)

Lambatos has opened several other Denver restaurants in the years since, including Baur's Ristorante at 1512 Curtis Street (the space is now home to Dazzle) and Ivy at the Glenn, which ran for about eight years at The Streets at SouthGlenn in Centennial. But Jimmy's Jersey Street Cafe is exactly what the restaurateur wants to be operating right now. "The days of packing a restaurant with 500 people on game day or whatever are gone," he states.

Instead, he's content with serving 25 guests inside (at least until COVID restrictions are eased) and an additional 16 on the patio. As at Footers, the food is classic Italian, but with an eye to current trends and seasonal ingredients (a watermelon-mint-feta salad, for example), because the owner understands that keeping up with the times is critical to pleasing customers. And he still has a baker who makes fresh bread every morning for sandwiches, because he wants that touch of New York authenticity that made the original Quizno's such a hit in 1981. 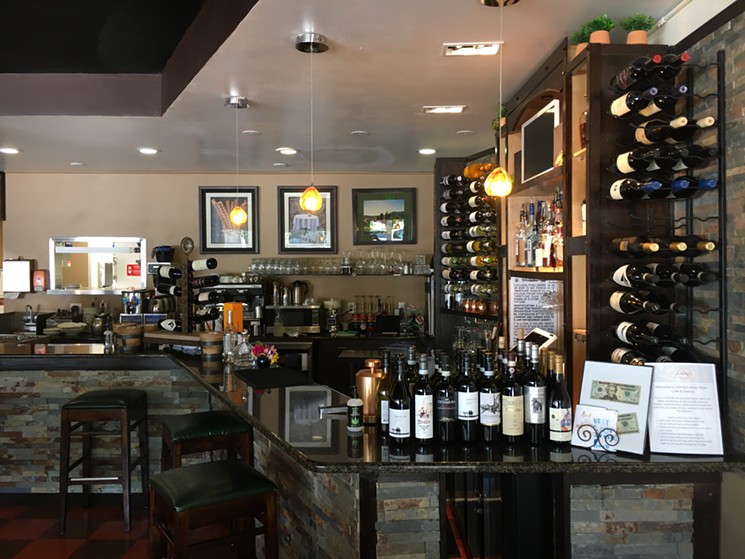 There's plenty of wine to go with the seasonal Italian fare.
Mark Antonation
"The old steakhouses, Greek restaurants, Italian restaurants — those restaurants aren't here anymore," he points out. "So much of the business is putting a new twist on old favorites. People are still looking for a great meal, but being catered to as a customer is still 50 percent of the equation."

That's why he's baffled by the amount of money that people are currently spending on takeout and delivery. "It's beyond me, but people are doing it," he says. "That's what you go out to dinner for: You want to be recognized as a customer and be catered to. I've spent a lifetime catering to people's needs."

So if takeout food is what people need right now, he's on board. And if a tour bus shows up at your restaurant as you're locking up for the night (as once happened at Footers in the late ’70s), you let them in for dinner, because that bus just might be carrying Barry Fey, Chuck Morris and the Rolling Stones (it was).

And if, on a warm summer night, you're sharing whiskey with friends at the restaurant after hours and a  neighbor wanders over in his pajamas asking if it's too late for a nightcap (as Lambatos recently experienced), you don't say no.

After all, you've sold sandwiches to America in nothing but a chef's coat and briefs, so what's a drink in pajamas between neighbors?

Jimmy's Jersey Street Cafe & Osteria (also known as Jimmy's on Jersey) is located at 932 Jersey Street and is open from 10 a.m. to close every day, with lunch served from 10 a.m. to 2 p.m. weekdays (and brunch added on weekends), happy hour from 4 to 6 p.m., and dinner from 4 p.m. on. Call 720-328-9481 or visit jimmysjerseystreetcafe.com for details and reservations.
KEEP WESTWORD FREE... Since we started Westword, it has been defined as the free, independent voice of Denver, and we'd like to keep it that way. With local media under siege, it's more important than ever for us to rally support behind funding our local journalism. You can help by participating in our "I Support" program, allowing us to keep offering readers access to our incisive coverage of local news, food and culture with no paywalls.
Make a one-time donation today for as little as $1.