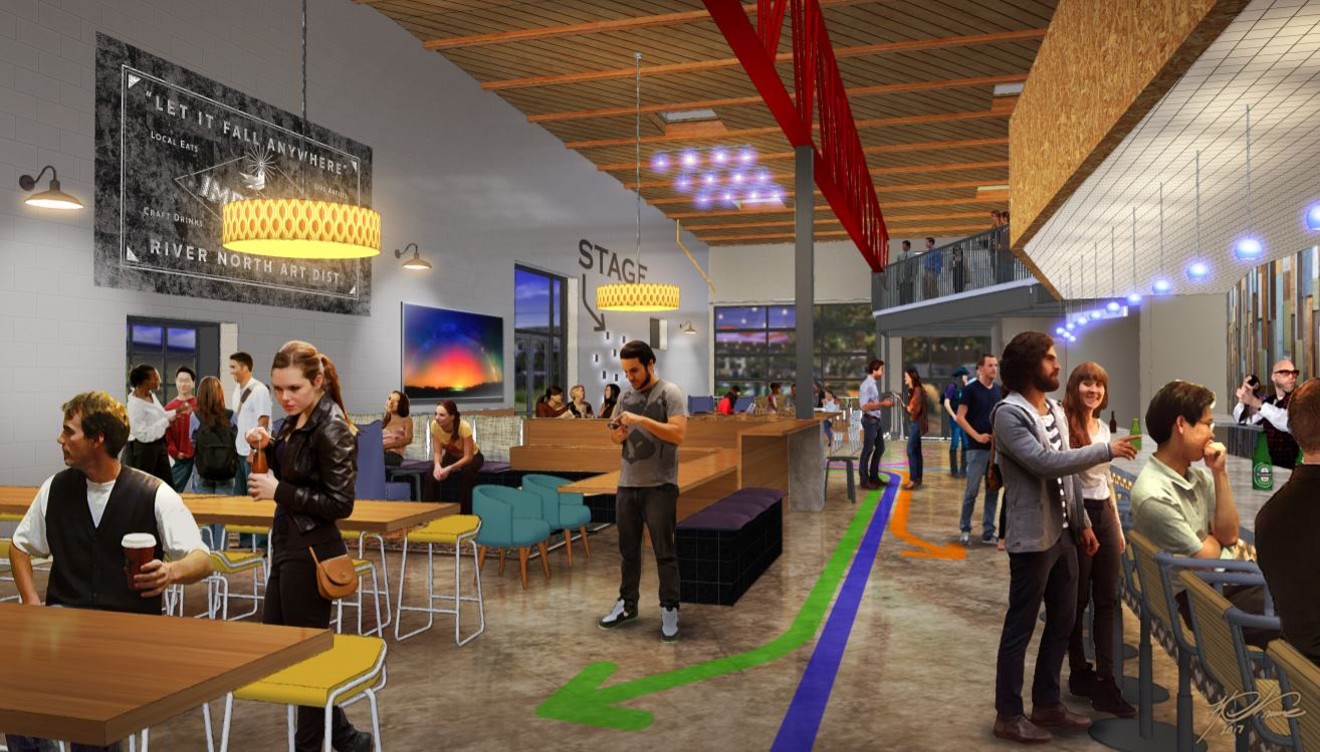 Indoor space will include a bar, coffee counter and a mezzanine level. Courtesy Improper City
The RiNo neighborhood is seeing an influx of fancy new apartments and condos, but at its heart, the district is still gritty and industrial. Rather than fight that, Hank Grant and Justin Riley, founders of the Rayback Collective in Boulder, will play to the neighborhood's strengths when they open Improper City, an indoor/outdoor bar, food-truck park, beer garden and gathering space that will be similar in style to the original Rayback — only much bigger.

Improper City is a collaborative effort with Movement Climbing and Fitness; the two businesses will share a building at 3201 Walnut Street in what was formerly an HVAC fabrication plant. There will be a common entrance with a bouldering gym and fitness center on one side and Improper City's bar, coffee counter and community space on the other. Grant and Riley explain that the interior of Improper City will take up about 7,300 square feet, with an additional 700 square feet on a mezzanine level and 12,000 square feet of outdoor patio space. 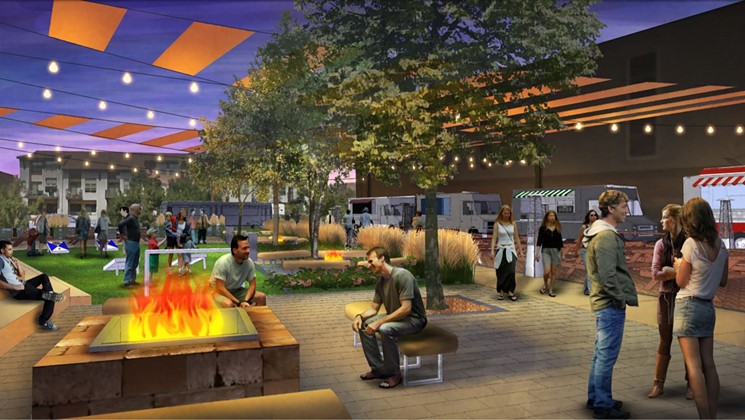 Improper City will have 12,000 square feet of outdoor space.
Courtesy Improper City
"Both of us care about the community," Grant explains of the relationship with Movement (owned by Mike and Anne-Worley Moelter). "If we can have that kind of symbiotic relationship where people come for a workout and stay for coffee or kombucha and then transition into lunch, it just feels like a natural fit."

At the Rayback Collective, Caribiner Coffee runs the coffee bar and Rowdy Mermaid runs the kombucha bar (and brews kombucha behind the scenes), while the Rayback runs the beer, wine and cocktail bar. At Improper City, all of the stations will be run by Grant and Riley, though Boulder's Ampersand Coffee Roasters will handle the initial setup of the coffee bar and will also provide the beans. Rowdy Mermaid kombucha will also be served alongside an array of wines, Colorado beers and house cocktails. The Rayback only serves batched cocktails on tap, but the new location will have a wider selection of mixed drinks designed by the bar team.

For food, Grant and Riley are working with the city of Denver to get permitting that will allow several food trucks to park on the property (current regulations allow for only one truck at a time). They're aiming for a late-June or early-July opening, "if all the stars align," Riley notes, but getting the food side lined up might take a little longer.

"At the Rayback Collective, our plan was to get people through the door for events and then hopefully they'd stick around," Riley explains. "What we hope to create for Denver is exactly that, too."

So in addition to food and beverages, there will be a stage for live music and other performances, community space for meetings and special events, and a rotating artist program that may see some large-format murals and temporary exhibits. "What we want to be is an amenity," Grant says, which will allow Improper City flexibility to adapt to the neighborhood's needs.

"It's still an adaptive reuse," Riley adds. "What we're doing is taking a vacant lot and bringing life to it." That's definitely an idea suited to RiNo's DIY vibe, where warehouses and garages still sit shoulder-to-shoulder with hip new dwellings — at least for now.