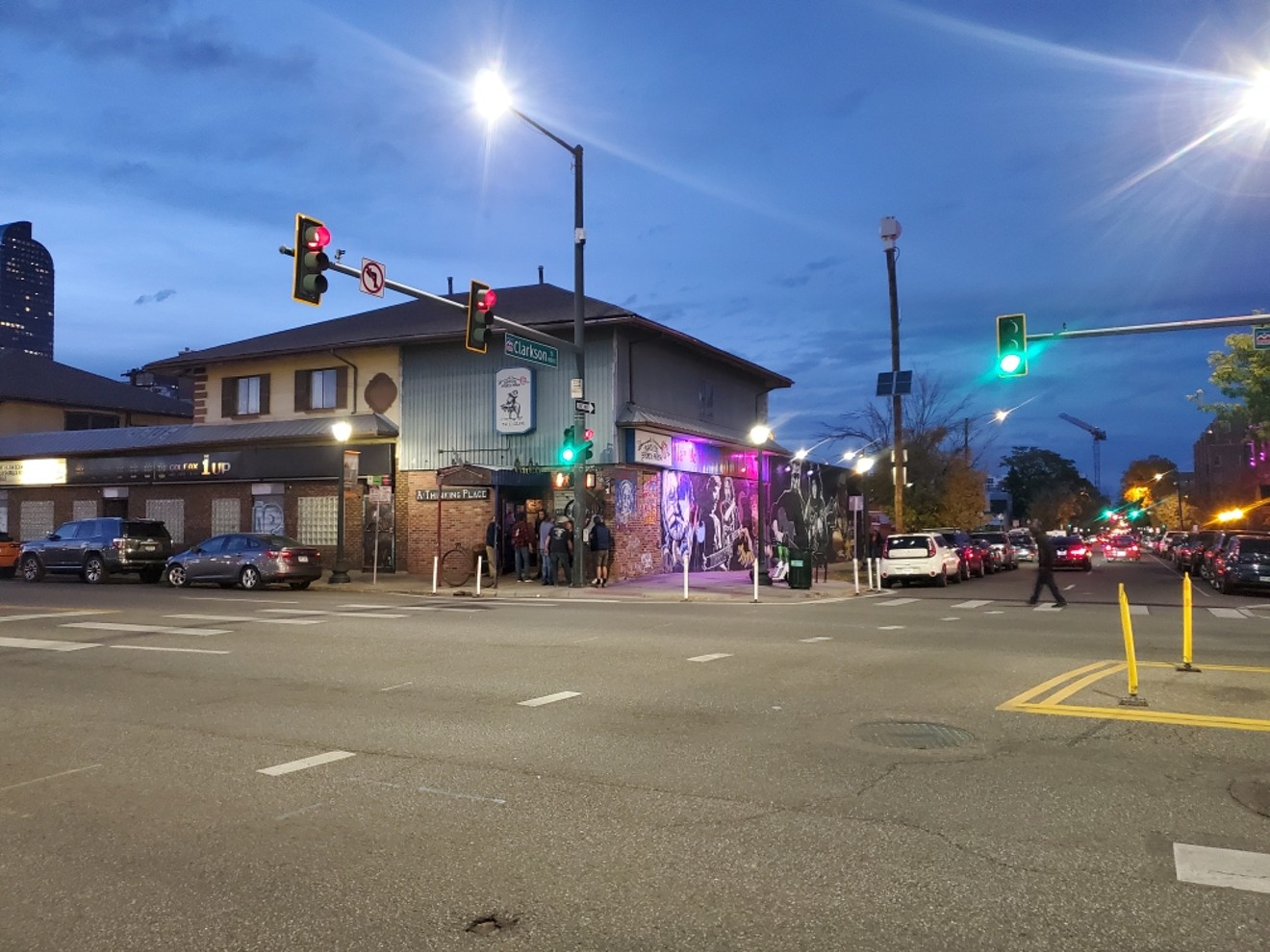 But on October 26, Jay Bianchi, who had an ownership stake in Sancho's until 2020, when he divided his holdings so that Tyler Bishop owned two-thirds and Timothy Premus owned one-third, had posted a notice on Facebook that the bar would be closing at the end of that night.

"Sancho's Broken Arrow has been an institution in Colorado for 22 years," Bianchi wrote. "I am very sad to announce that it will not be in that location anymore."

And the October 27 hearing was canceled after the owners of Sancho's Broken Arrow reached a proposed settlement agreement with the city.

Sancho's Broken Arrow boasts a collection of Grateful Dead memorabilia.
Molly Martin
Under an agreement with the Department of Excise and Licenses, another Grateful Dead-themed bar founded by Bianchi, So Many Roads at 918 West First Avenue, is already slated to close for the month of November because of violations of both state statutes and city ordinances related to providing alcohol to a minor, selling alcohol to a minor, distributing a controlled substance and disorderly behavior.

In February 2021, the DPD sent two plainclothes vice cops — Officer Sierra Kenoyer and Detective Michael James — into Sancho's Broken Arrow to conduct an undercover drug purchase. They couldn't buy drugs that night, but after two other vice officers met an employee at So Many Roads who also worked at Sancho's, they reportedly were able to purchase cocaine at the bar in September 2021, and then a second time that November.

Sancho's was cited with four counts of cocaine dealing, two counts related to an unlicensed security guard and two counts of allowing underage alcohol consumption, as well as three charges related to the conduct of an establishment, including allowing on-site marijuana consumption.

According to Bianchi, it became clear to the owners of Sancho's that the city would revoke the bar's license, and so they decided to close on their own without waiting for a final decision after the scheduled hearing. 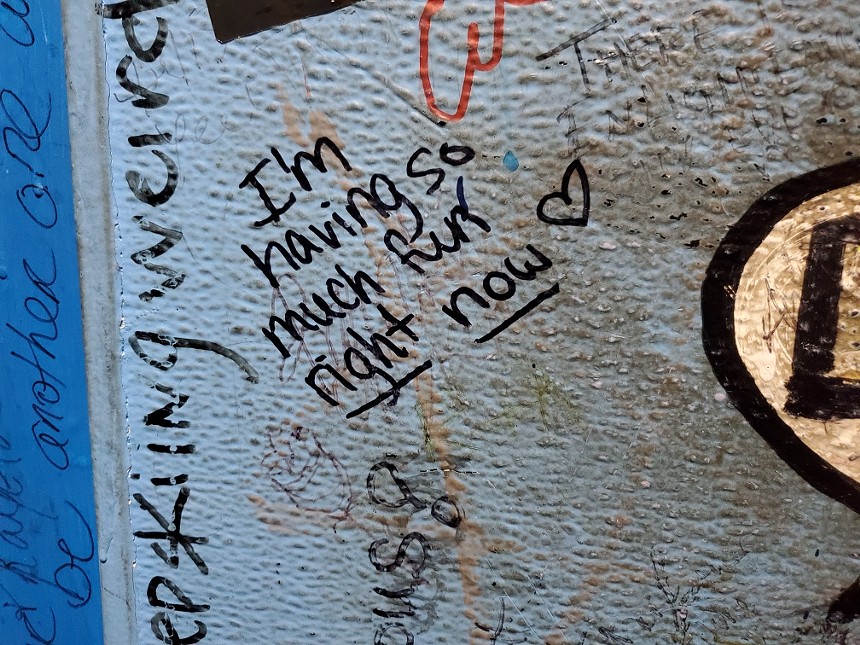 Jay Bianchi and other Sancho's Broken Arrow patrons had great times at the bar.
Molly Martin
In his October 26 Facebook post, Bianchi even seemed to hint that So Many Roads might be moving into the Sancho's space at 741 East Colfax Avenue. "Our good friend Dave Hebert will be moving his gig from So Many Roads Museum and Brewery to here to honor the bar that made so many dreams come true just one more time," he wrote.

But in a conversation with Westword, Bianchi says he just wanted people to know that if they wanted to feel the Sancho's spirit, they could still go to So Many Roads...after its one-month closure.

Bianchi once owned both bars; in the face of sexual assault accusations and union picketing in 2021, he announced he was retiring and transferring his ownership in both So Many Roads and Sancho's Broken Arrow. But he's continued to comment on the bars' issues with the city, causing some to wonder if he is still involved with them.

Bianchi tells Westword that he only knew Sancho's would close because his collection of artwork is still there, and he'll have to find a new place for it when the bar is gone. "It's a shame that it was forced out for things that could be correctable," he adds.

"Tonight is the night," his Facebook post had announced. "We celebrate the gift that Sancho's Broken Arrow brought to us over and over: the gift of love and community."

Patrons hugged, teared up and talked about the end of an era on Colfax.

Sancho's Broken Arrow is now closed for good. On October 28, Molly Duplechian, the director of Excise and Licenses, signed an order accepting the settlement agreement. As part of the deal, Sancho’s will surrender its tavern liquor license and cabaret license; the department is treating the surrender as a revocation of those licenses.

Sancho’s can no longer operate and has seven days to remove all alcohol from the premises. It cannot be issued any similar license for one year.

The settlement also confirms that Sancho’s ownership must abide by the rules set out in a temporary restraining order from the City Attorney’s Office, in connection with a public nuisance charge filed against the property.

On August 17, the city issued a summons to owners citing Sancho’s Broken Arrow as a public nuisance because it was the site of unlawful possession with intent to manufacture, dispense, sell, or distribute, a controlled substance, and kept, maintained, controlled, rented, or made the property available for unlawful distribution or manufacture of controlled substances.

The summons lists Norman J. Granberry as the owner of the building. Sancho’s Broken Arrow leased the space.

The City Attorney’s Office issued a temporary restraining order on August 19 stating that Granberry, Prebus and Bishop, along with any others who claim an interest in the property. were “restrained, enjoined and prohibited from entry upon or use of [the Sancho’s property] except for the purposes of maintenance, environmental clean-up, sanitation, security of property, code compliance and such other legitimate purposes.”

The order also related to the contents of the buildings, including personal property contained there. Bianchi’s art collection, therefore, is subject to the temporary restraining order.

The public nuisance case is set for trial on December 6.

"Sancho’s being open for business [October 26] was in direct violation of the TRO," Bordovsky says. "After we became aware that they were operating, DPD made contact with the manager/owner and informed them they could not be open."

This story has been updated to reflect the official cancellation of the October 27 city hearing on Sancho's Broken Arrow and the filing of the public nuisance case.
KEEP WESTWORD FREE... Since we started Westword, it has been defined as the free, independent voice of Denver, and we'd like to keep it that way. With local media under siege, it's more important than ever for us to rally support behind funding our local journalism. You can help by participating in our "I Support" program, allowing us to keep offering readers access to our incisive coverage of local news, food and culture with no paywalls.
Make a one-time donation today for as little as $1.