A New Vietnamese Restaurant Is Coming to Cherry Creek This Year Anthony (left) and Anna Nguyen are planning to open their Vietnamese restaurant this year. Casey Wilson
"Denver is ready for Vietnamese flavors," says Anna Nguyen, co-owner of Sắp Sửa. Nguyen and her husband, Anthony, plan to open a brick-and-mortar location in Cherry Creek by the end of the year — though Anna doesn't want to share the exact address just yet.

Anna and Anthony met nine years ago at culinary school, when Anna went back for seconds at the school's buffet. "I saw her the first time, and when she came back a second time, I knew I loved her vibe," Anthony remembers. Over the years, the couple talked often about opening a restaurant together, but the idea stayed on the back burner — until the pandemic gave them the time to work on it.

In November 2020, the Nguyens moved from Anthony's home state of California to Longmont, where Anna grew up. There they started serving Vietnamese food out of a cart. "It never even had a name, but it gathered a pretty strong base of support," Anna says. "We weren't even sure how Vietnamese food would do in Longmont, but people loved it."

The concept soon grew, and the Nguyens began doing a series of pop-up dinners at Pizzeria Locale in Boulder, Sunday Vinyl in Denver and Hickory and Ash in Broomfield. "Through these pop-ups, we have to maintain this identity, but we don't have a space to do it in. That's been challenging," admits Anna. But, she adds, it's also helped the couple build confidence in their cooking. Chả cá lã vọng is hamachi, turmeric leche de tigre, dill and mắm tôm.
Sap Sua/Instagram
Sắp Sửa is inspired by Anthony's upbringing as a first-generation Vietnamese person; the name translates to, "about to be," Anna explains. "For us, it's the mindset of staying humble and working really hard to develop our skills. In other words, it's the implication that if you always think you're about to be great, you'll never stop working toward that goal."

The couple hopes to introduce customers who aren't familiar with Vietnamese flavors to the cuisine, and to take other first-generation Vietnamese people back to their childhoods. "Kids like myself, we didn't share the same experience as our parents," Anthony adds. "Our food represents that. Our food should feel separate from our parents while still keeping the integrity and traditions."

One pop-up hit that will definitely be on the menu when the restaurant opens is a charred-cabbage dish. "It has an egg yolk sauce, with fish sauce and anchovy breadcrumbs," Anthony says. At the first pop-up, some guests ordered the dish, finished their dinner, then asked if they could order it again, he recalls. "It's based off a humble dish my mom would cook for us," he explains. "She would work six nights a week and still find time to come home and cook for us. But on the nights she was super tired and wasn't inspired to cook, she would make this dish." 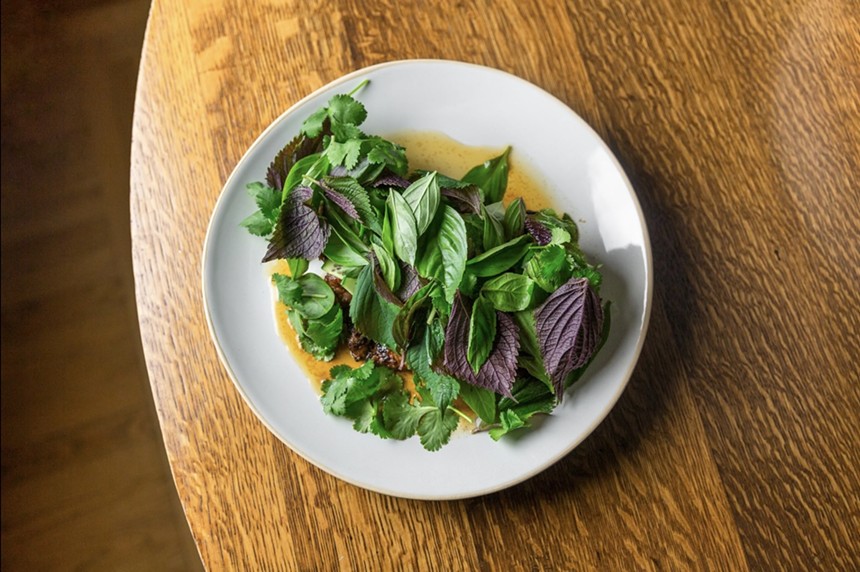 Thịt heo nướng sả: pork shoulder steak with lemongrass, tamarind, cucumber and herbs.
Star Chefs
As they work to open the restaurant, the couple has faced many challenges that they didn't see coming, from delays in finding the perfect second-generation restaurant space (one already outfitted with the right equipment) to financing the whole operation themselves. But there have been internal struggles, too. "There's been a lot of self-doubt, like, 'Can we really do this? Are we capable of accomplishing this dream?'" Anthony says.

But now that dream is getting closer, and plans are being finalized. Eventually, the restaurant's bar will double as a bakery in the mornings, headed up by Anna, who has a pastry chef background with a focus on French techniques. "The beauty of it is that Vietnamese food has been highly influenced by French food, because Vietnam was occupied by the French for a long time," she explains. "A lot of traditional Vietnamese pastries and desserts stem from traditional French ones. The pastries will be this nice sweet spot of feeling very French but with a lot of Vietnamese flavors, all in my style, which is really simple, handmade, and not too fussy."

When Sắp Sửa does open, the Nguyens want to create a welcoming and comfortable environment where guests feel like they can be themselves. Anna hopes that at the end of a meal, customers will walk back to their cars thinking, "I have never tasted anything like this. I want to come back for more."

For more information on Sắp Sửa, including upcoming pop-up dates, follow it on Instagram @sapsuarestaurant.
KEEP WESTWORD FREE... Since we started Westword, it has been defined as the free, independent voice of Denver, and we'd like to keep it that way. With local media under siege, it's more important than ever for us to rally support behind funding our local journalism. You can help by participating in our "I Support" program, allowing us to keep offering readers access to our incisive coverage of local news, food and culture with no paywalls.
Make a one-time donation today for as little as $1.