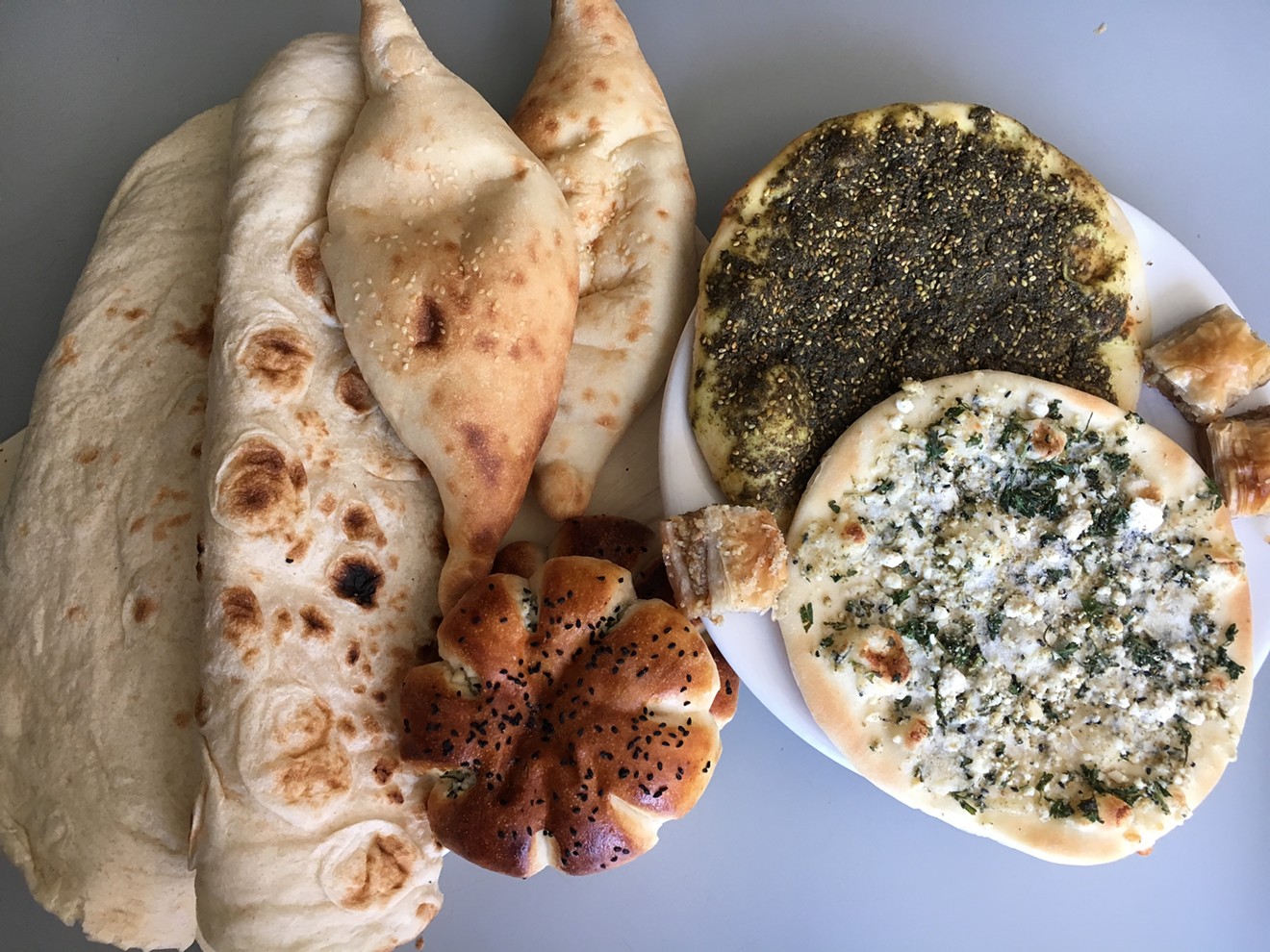 Flatbread, samoon, cheese-filled buns, baklava and pizza-like rounds called manakish are just a few of the baked goods available at Shahrazad. Mark Antonation
You probably remember learning in junior high history class about the Fertile Crescent, the band of geography that curls up the Nile River and along the Mediterranean Sea before arcing east to the Persian Gulf. Your teacher also called it Mesopotamia or "the cradle of civilization," because it was the birthplace of many things now considered hallmarks of modern humans: writing, legal codes, agriculture, bread.

Bread is the part of the lesson that stuck with me most, as I envisioned bakers pulling steaming loaves from clay ovens and stacking them in piles in street stalls for early-morning customers. While street vendors hawking fresh bread may be a rarity in Aurora, baked goods that have changed little over the centuries can now be found at Shahrazad Bakery at 2603 South Parker Road — where you'll even find a clay oven used to bake chewy flatbreads that measure more than a foot in diameter.

Shahrazad owner/baker Bassam Salih with a fresh batch of flatbread.
Mark Antonation
Bassam Salih and his wife, Marta, opened Shahrazad just a month ago to bring Middle Eastern breads, especially those of Iraq, their home country, to Aurora. Three years ago, they moved to Denver from Utah, where Bassam also ran a bakery. He says that most of the breads and other baked goods he makes will be familiar to other Iraqis living in the area, but that their customers come from all over the Middle East.

"We need to accommodate our customers from all over," Marta says.

The shop is small, and the clay tandoori oven sits just behind a counter stacked with bags of bread and a display case filled with flaky pastries. The tandoori oven isn't immediately recognizable, since modern versions are housed in stainless-steel boxes with controls along the front edge. But when Bassam lifts the lid, a round opening reveals the clay interior. He and another baker take balls of dough and stretch them until they're thin and flat, then use a special tool to slap the circles onto the hot clay inner walls of the oven. Timing is critical, as the side of the dough stuck to the clay crisps quickly while the opposite side stays soft and bubbly. Wait too long and the crust burns and the flatbread falls into the depths of the oven, not long enough and the dough sticks and tears.

Dough is stretched and pressed against the clay inner wall of a tandoori oven.
Mark Antonation
Iraqi families buy the flatbread in packs of four, but Marta says she'll also sell them individually on request. Also in bags of four are loaves of Iraqi samoon: short, fat baguettes with pointed tips. These are firm and chewy, with a slight nutty flavor from a sprinkling of sesame seeds; Bassam says they're perfect for sandwiches. Imagine them stuffed with chicken or lamb shawarma, fresh tomatoes and lettuce and a tangy sauce, and you won't be too far from one of the most popular sandwiches in Iraq. Bread lovers will immediately recognize the samoon's superiority over packaged grocery-store pita.

In fact, that's one of the reasons why the couple opened their bakery. "We're all tired of all of those preservatives and artificial colors in everything," Marta explains. "That's been our dream — just a bakery, not a grocery, but a place you go just for bread."

Manakish, or "Middle Eastern pizza."
Mark Antonation
She adds that Aurora is a good city for Middle Eastern families. In Utah, there wasn't much other than Walmart, but she hasn't had to visit a Walmart since moving to Colorado. And neither has the rest of Aurora's Middle Eastern community — at least not for bread. While there are other Middle Eastern markets in the city specializing in one or two types of bread, many of this bakery's selections are unique to the shop.

Flaky baklava drips with honey.
Mark Antonation
Tuesdays are a slow day at Shahrazad, when Bassam's fellow baker takes the day off. But every other day of the week, you'll find a greater variety. There are fresh fatayer, boat-shaped buns filled with a variety of savory ingredients; manakish, which Marta describes as Middle Eastern pizza; and sambusak, puff-pastry triangles filled with ground beef or feta cheese. And for Western palates, there are even beef hot dogs wrapped in dough and baked, not unlike a bagel dog. If you have a sweet tooth, look for honey-drenched baklava and other Iraqi specialties.

Whatever bread or pastry you opt for, know that almost everything is made from scratch daily with minimal ingredients. Even on Tuesdays, flatbreads and samoons are warm in their plastic bags. And fatayer and manakish are kept in the freezer up front, along with whole-wheat versions — baked twice a week — of the other breads, to get through until Wednesday.

Aurora may be far from the cradle of civilization, but the city is now a little more civilized, thanks to the Iraqi breads of Shahrazad.

Shahrazad Bakery is open from 9 a.m. to 7:30 p.m. daily in the triangular shopping center formed by Parker Road, South Havana Street and East Yale Boulevard. Call 303-671-2911 or visit the bakery's Facebook page for more details.
KEEP WESTWORD FREE... Since we started Westword, it has been defined as the free, independent voice of Denver, and we'd like to keep it that way. With local media under siege, it's more important than ever for us to rally support behind funding our local journalism. You can help by participating in our "I Support" program, allowing us to keep offering readers access to our incisive coverage of local news, food and culture with no paywalls.
Make a one-time donation today for as little as $1.