Six Changes the Great American Beer Festival Should Consider for 2019

Photo © Brewers Association
The Great American Beer Festival is always glorious, but some years are more glorious than others, and although festival organizers added cool new features this year, I think the event took a step back overall.

It's become painfully obvious that the concept of a huge fest celebrating the best beers in the country no longer applies to GABF. For starters, with more than 6,300 breweries — going on 9,000 — nationwide, there are simply too many of them for the fest to be representative. Of those 6,300, 2,500 competed for medals in 2018, while 850 came to the festival to pour beer. Most of the attending breweries are close to Colorado or are large enough to afford the expense.

And many of the breweries that didn't participate are among the most significant in America, either in size or reputation — or both. Entire regions of the country were barely represented, most notably New England, which sent a grand total of sixteen breweries. The South was also missing in large part from the convention center.

But the festival also suffered from a logistics standpoint. A monstrous undertaking, it was clear that GABF has reached a point of diminishing returns. The larger it grows, the less enjoyable it becomes.

What to do? The Brewers Association, which hosts GABF, has shown in the past that it is willing to adapt, albeit very slowly. So here are some suggestions for what to do next year and into the future.

Danielle Lirette
1. Consider capping the number of brewery booths at 700 or 750, and maybe limit the number of breweries from each state. Who would this affect? Colorado and California. Then find regional sponsors who'd be willing to help subsidize breweries from their part of the country. If the BA is willing to take on Buffalo Wild Wings as a sponsor, as it did this year, then maybe Shake Shack would want to pay for a Northeastern section and help breweries like Treehouse, Trillium and the Other Half send their beers; as it was, New England has been nearly absent from the last two festivals. Maybe Tabasco maker McIlhenny Co. would help sponsor a few beer makers from the South. Alternately, GABF could feature a different rotating region each year so that there would be a special reason for breweries to come. A final idea: The BA itself could feature and pay for a top-rated brewery area with beers that appear in Beer Advocate's list of the top 100 beers in the U.S.

Von Trapp Brewing, from Vermont, was one of the few New England breweries to show up at GABF.
Von Trapp Brewing
2. Ramp up investigations of a regional format that would include qualifying festivals. As I pointed out in a recent post about whether it is time to consider making GABF smaller and creating regional qualifiers, duplicating GABF in other cities would be an immensely expensive and difficult task. I think it gives the staff of BA a collective migraine just thinking about it. S, the notion may not be feasible in the next year or two, but the BA should definitely intensify its efforts to come up with a solution. It would certainly give winners more incentive to participate locally and to fly to Denver for the big show if they won regional medals.

Jonathan Shikes
3. Change the layout again. Although I liked the idea of organizing the festival alphabetically, it didn’t work. In fact, it made things more confusing, since the signage didn’t always match the breweries. Furthermore, the formerly awesome — and more civilized — Meet-the-Brewer section was lost in the middle this time around rather than being in a separate section. The food trucks, a brand-new feature this year, were hidden in a corner, and the holding pens, where attendees had to wait before coming in, were smack in the middle of everything, disrupting foot traffic and wasting a huge amount of space. My suggestion would be to go back to last year's layout, with the Meet-the-Brewer section in its own area. Put the food trucks in the middle and double the number; get rid of the holding pens; and make the alphabetical situation make more sense. 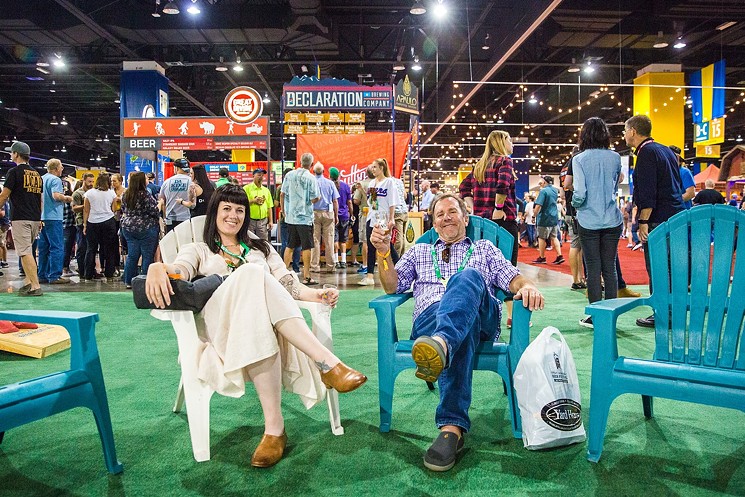 Please let us sit down.
Danielle Lirette
4. For the love of god, please bring back the seating areas that made the festival a nice place to be for the previous three years. A few years ago, GABF felt like a forced march. Aside from a handful of tables and chairs, there wasn't much space to rest and recuperate before heading back into the field. Then, miraculously, the organizers added plentiful seating areas — and it was a revelation! This year, they were gone. One bright spot? The Buffalo Wild Wings area. I came in prepared to hate the sponsor's section, primarily because the chain restaurant’s mentality — which is that every location is almost exactly the same — flies in the face of craft brewing’s ethos of independence, but also because BWW has always had one of the worst craft-beer selections around. But the company and the BA did a nice job with the layout (and I hear that Bdubz is planning on adding much more craft beer this year). You could sit, you could try some cool beers and eat wings. You could watch TV. But mostly you could rest.

10 Barrel Brewing Facebook page
5. From its very beginning, GABF has included corporate breweries like Coors. And for many years, the BA justified their participation by saying that the competition was about rewarding the best beer in America, not just the best craft beer. Those big breweries also paid huge amounts of sponsorship dollars. More recently, though, as the craft industry has grown — and as corporate breweries have battled craft — the BA has severely limited the big boys' ability to participate. That's fine; I get it. You can't bash Big Beer 362 days a year and give them a hug on the other three days during the festival. Still, there has to be a happier medium. Right now, AB InBev's twelve craft breweries are only allowed to have one or maybe two booths at GABF. The same with Coors and Constellation, and even Mahou San Miguel, which owns Founders and Avery. As it is, Founders, Breckenridge, Elysian, AC Golden, the Sandlot, Four Peaks, Goose Island and many others were entirely absent. I'm not saying the BA should allow them to sponsor end caps again — just  let a few more of them come. After all, 10 Barrel Brewing, which is owned by AB InBev, won three medals this year.

Who will replace Charlie Papazian as fist-bumper-in-chief?
Photo © 2018 Brewers Association
6. Now that GABF and Brewers Association founder Charlie Papazian is stepping down from the organization after forty years, who will fist-bump every single award winner during the awards ceremony each year? BA spokesman Ann Obenchain says the question is a hot potato within the organization and will require a lot of thought. My take? It seems like celebrities like to bash craft beer — hello, Jim Gaffigan and David Chang — or star in commercials promoting the megabrewers who love to bash craft beer — hello, Amy Schumer and Seth Rogan. So how about finding some celebs who love it instead? There have to be a few who don't mind endangering their knuckles. It would get national attention, and it would be fun for the brewers.
KEEP WESTWORD FREE... Since we started Westword, it has been defined as the free, independent voice of Denver, and we'd like to keep it that way. With local media under siege, it's more important than ever for us to rally support behind funding our local journalism. You can help by participating in our "I Support" program, allowing us to keep offering readers access to our incisive coverage of local news, food and culture with no paywalls.
Make a one-time donation today for as little as $1.