Lauren Feder and Hosea Rosenberg with their daughter, Sophie. Gaelle Glass Photography
Hosea Rosenberg and Lauren Feder realized that something was wrong with their daughter, Sophie, when she had trouble learning to walk. The little girl was diagnosed with arthritis, and with the help of physical therapy, foot-ankle braces and anti-inflammatory medication, she was able to start walking before she turned two.

But other symptoms persisted, and after waiting a year for an extensive genetic test to be conducted and two more months for the results, Rosenberg and Feder finally learned Sophie's diagnosis on March 9, 2020: multicentric carpotarsal osteolysis syndrome, or MCTO, a condition that causes degeneration of the wrist and foot bones as well as kidney problems that have led to renal failure in some of the other people with the illness — a total of just thirty other known cases around the world.

"We were so down about what we had just learned about Sophie," Feder remembers. "It was unimaginable."

Because so little was known about MCTO, Sophie's parents founded Sophie's Neighborhood, a nonprofit that raises money for research of the disease.

Rosenberg gained notoriety on a national level after winning Top Chef in 2009, but even before that, he was a familiar figure on the dining scene, notably as a chef at Jax Fish House. After his win, he opened Blackbelly and later Santo, both in Boulder. And the restaurant community has definitely stepped up for Sophie's Neighborhood.

"We've had a couple things work in our favor," Rosenberg explains. "One is that over the years, being a chef and being involved in the community, I've always done a lot of fundraising there when people ask for help, so I think a little bit of karma is working. ... And being in the public eye as a chef and restaurant owner, people just kind of know who we are and they want to help. If we were, like, accountants or doing something behind the scenes, it would be harder to get people's attention."

The first fundraiser for Sophie's Neighborhood, an online auction on May 30, 2020 (Sophie's third birthday), raised $120,000 in one weekend, with people bidding on donations that included online cooking classes with Top Chef alums, a private wine class with James Beard Award winner and Master Sommelier Bobby Stuckey, a virtual meet-up with Broncos Super Bowl winner Emmanuel Sanders, and much more. That was followed by Sophie's Ice Cream Social, a day in which participating restaurants give proceeds from ice cream sales to the nonprofit. During the second annual event, which took place on July 18, over 800 scoops were sold in one day.

Sophie's Neighborhood had raised just under $700,000 by the end of 2020, and that total is now just over $750,000. "It exceeded our expectations," Feder says. "We're just so grateful. We're so thrilled that our local community and people far and wide have been continuing to give and engage with us and share our story." Conducting experiments at home, just like the ones that may lead to more answers about MCTO.
Sophie's Neighborhood
But financial support is just part of that story. Early on, Rosenberg and Feder had a chance encounter with someone who's been integral to the research side of Sophie's Neighborhood: Larry Gold, the founder of SomaLogic in Boulder and an investor in Jax when Rosenberg was a chef there. "The day we got Sophie's diagnosis last March, we had gone to dinner with Sophie, and we were just devastated," Feder remembers. "We didn't know what to do, and we saw Larry in the restaurant, and Hosea said, 'I wonder if he could help us. He's a scientist of some sort...'"

"I just knew he was really smart and did something with humans and genetics," Rosenberg adds.

"We reached out to him through a friend that knows him well, and right away, that same night, he wrote back and said, 'I'm going to give you the help you need and deserve,'" Feder continues. "It was the most amazing thing to hear."

Gold became the first member of the Sophie's Neighborhood Scientific Advisory Board, and he recruited others. Several research projects are now in the works, including a retrospective natural-history study through Children's Hospital Colorado; the University of Colorado is gathering medical data from other known cases in the country, information necessary to prepare for a clinical trial. "You really need centralized data so that we can see if there's a positive effect with therapeutics," Feder explains.

Sophie's Neighborhood is also funding an international biorepository at the University of Pennsylvania through the Children's Hospital of Philadelphia. "There's a brilliant scientist that we're working with there," Feder says. "He's able to handle international patient samples because, unfortunately, here in Colorado, they just don't work with international patients at the moment. There's a lot of red tape that I had to unstick throughout this process."

"We also have a group at Stanford who we're funding to study bone marrow in this disorder," Feder adds, explaining that research indicates that the bone problems associated with the disorder could stem from cells that originate in bone marrow. The University of Tsukuba in Japan is also helping with research, determining whether a bone marrow transplant could help or even alleviate the condition.

While bone marrow research offers one way forward, it's not the only path that Sophie's Neighborhood is pursuing. "This is kind of an amazing thing," Feder says. "There are drugs — even FDA-approved drugs — that have not yet been approved for the efficacy of the disorder they were developed for, but you can have access to these libraries of these compounds, and you could run an experiment called a 'high throughput screen' and test whether or not there's something that actually already exists that could be repurposed for your disorder."

Louisville-based ArtisanBio has been able to engineer human MCTO cell lines that can be used to see if an existing drug could target the disorder. "We're going to be working with the Broad Institute connected to Harvard and MIT to do this screen and use their library of compounds with our experiment, and see if we could see a change," Feder notes.

After months of red tape, Sophie's samples finally arrived at SomaLogic in mid-July, kickstarting another project that's been in the planning stages for months. In research already done on MCTO, Rosenberg and Feder learned, proteins are one of three areas that can be targeted with therapeutics. "What we believe to be true is that because of the mutated gene in this very specific region of this gene, there's a protein that's creating an overabundance," Feder explains. "The very simplified way of saying it is that we just need to down-regulate that overabundant protein, and if we were able to do that, you would be able to reverse everything that's happening."

Gold and his team at SomaLogic will use Sophie's samples to identify the elevated proteins, which could give a clearer picture of the potential target for therapeutics.

The research efforts have implications far beyond MCTO. "It does feel like we're on the cusp or in the beginning of a scientific revolution," Feder says. "And because of all these things, there's a lot of new technology that's going to work for the benefit of everyone in the world."

"Larry told Lauren that she's going to get an honorary Ph.D. for all the research she's done," Rosenberg says.

"Sometimes when I'm in these meetings with these brilliant people, I just kind of pinch myself," Feder admits. "It's incredible to be part of these conversations. And then, you know, it just sucks that it's for something so scary and so important. The stakes are so high for us personally." 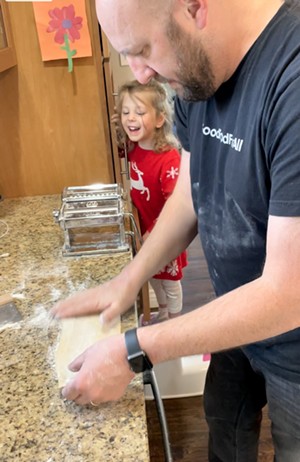 Sophie smiles while Rosenberg makes pasta at home.
Sophie's Neighborhood
Because it all comes back to Sophie. "She's doing really well in that she's still mobile, she's still walking, she can use her hands," Feder explains. "But the hardest part is just that it really interferes with her daily world in that we give her shots every week of medication. She goes into the hospital for these infusions of a medication, and this is all to sort of manage symptoms as best we can to try to slow this down. ... There's a lot of poking and prodding."

Now that Sophie is four, behavioral effects have also developed. "Sometimes she's just a sweet, sweet amazing kid, but then there are moments where she really wants to take the control back," Feder says. "Like, she doesn't want to eat, because she knows she can control that."

"It's hard to tell if she's just being a four-year-old, or if she's acting out because so many things happen to her that she doesn't want," Rosenberg adds.

With the support of the restaurant community, fundraising efforts have continued, most recently with a dinner that was part of Tajahi Cook's Supper Club series, where Rosenberg cooked. "He came to Blackbelly to meet me," Rosenberg recalls. "I gave him a quick tour of the restaurant and then I was telling him about Sophie, and he was like, 'Well, what if we do a fundraiser for her?' And I was shocked, because this is how he makes his money right now. This isn't just a side project; this is his thing."

A portion of the proceeds from each of the two remaining Supper Club events — on August 30 and September 9 — will go to Sophie's Neighborhood.

The nonprofit has also partnered with the Steamboat Food and Wine Festival, which takes place September 23-26. "They are donating a portion of the proceeds to Sophie's Neighborhood this year and next year; they want to do a two-year partnership," Feder says. Rosenberg will be cooking at an already sold-out dinner there, as well as offering a butchery demo and charcuterie tastings.

More event plans are in the works for later this year, including another online auction, possibly around the holidays. While she works on all of these projects, Feder continues to do PR for Blackbelly and Santo — the MCTO diagnosis came right as the pandemic hit, creating a very tough time for restaurants — and care for Sophie, of course, whose condition requires frequent doctor visits.

"But she's mobile and she's smiling, so we're really happy with all of that," Feder concludes. "And we just want to keep her as mobile as we can for as long as we can, and that's our goal."
KEEP WESTWORD FREE... Since we started Westword, it has been defined as the free, independent voice of Denver, and we'd like to keep it that way. With local media under siege, it's more important than ever for us to rally support behind funding our local journalism. You can help by participating in our "I Support" program, allowing us to keep offering readers access to our incisive coverage of local news, food and culture with no paywalls.
Make a one-time donation today for as little as $1.