Owner Merlin Verrier collected boomboxes from thrift stores and garage sales over three years.
Molly Martin
What we saw: Street Feud is a concept that's been taking shape for years — first as a stall at Avanti, where it debuted in August 2019. In February 2020, owner Merlin Verrier thought he'd found a space for the concept on South Broadway, but the pandemic put a halt to that plan, and Verrier ended up moving into venue/bar Number Thirty Eight in October 2020. "They had built everything out," he says. "All I had to do was get a team and food, and I put like $2,500 in the bank, hoping it would work, and it got us through a year of it. It gave us a chance to refine our recipes and get better at our systems."

Verrier spent five months negotiating a lease for a different South Broadway location, but that deal fell apart just six weeks before his Number Thirty Eight stint was set to end. "At that point I was crushed...like, it's over," he recalls. "After 24 hours of sobbing, this place popped up on the market, and I was able to see it right away, and I have a lot of mutual friends with Goose."

That would be Goose Sorensen, who ran neighborhood fine-dining staple Solera out of the space for sixteen years — and still owns the building. It was initially leased to Hank's Texas Barbecue, but that business closed in August after two and a half years. Street Food opened at the address in early December, and in this new, permanent home, Verrier's full vision is finally coming to life.

Verrier has a long professional history in the culinary world, both in and outside of Denver. He once cooked a birthday dinner for President Barack Obama, was the culinary director for Lollapalooza, has guest-judged on MasterChef and was the chef de cuisine at the Michelin-starred Graham Elliot Restaurant in Chicago.

"It's all about curating that experience," Verrier says of fine dining. "As soon as [a guest] steps onto your property, they're in your hands, and you own how that whole thing goes. So even though I'm doing quick service, I didn't want to change that."

As you step into Street Feud, you're immediately greeted by a soundtrack of old-school hip-hop, brightly colored street-art touches and a collection of retro finds that cover nearly every inch. "When you're at a market in a foreign country, your sense are just overwhelmed," Verrier notes. "Your senses are just engulfed everywhere you look, and that was the goal, to replicate that here, with a nostalgia feeling that gets at some of those same senses, but provided differently."

The little details in the restaurant design add up to a big impact. Instead of a number, guests choose a cassette tape after ordering. The wall by the entry is a display case of old-school boomboxes that Verrier collected secondhand over three years. There are pens on the counter where guests are encouraged to leave their own mark on the place. The dining room is covered with layers of old magazines, posters and random found objects. Even the hats and T-shirts that are for sale are thrifted finds marked with the Street Feud logo, which means each is unique — an approach that was a hit with staff and keeps more textiles out of the landfill, Verrier explains. As a result, the restaurant feels like it's been in this space for much longer than just a few weeks.

Verrier's ultimate goal is to expand to more locations in the Denver area and beyond. "Denver's a great launching spot," he says. "I feel like it's one of those rare places in America that if you can do well in this region, then you have a chance for expansion.... Excited to have the opportunity to give it a go." 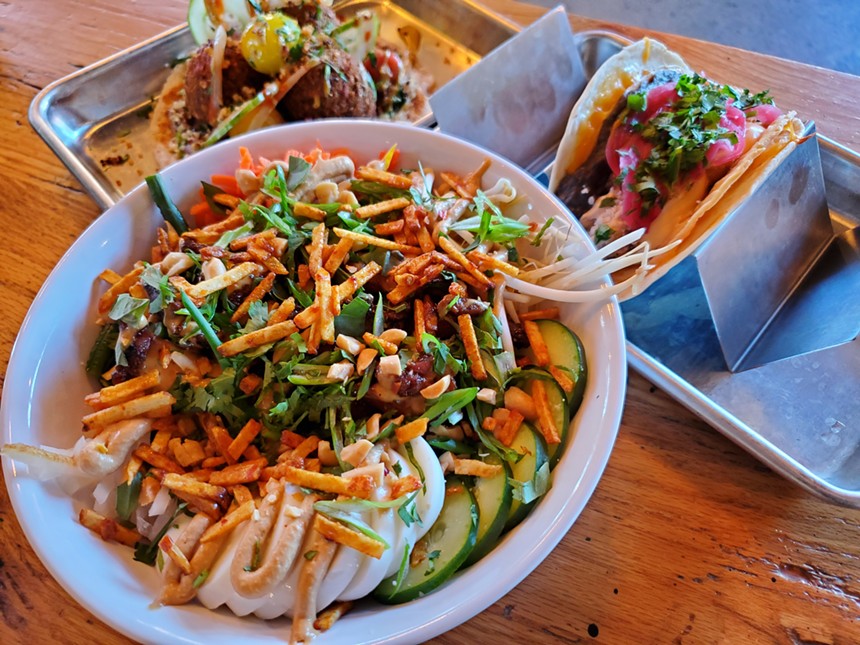 The chicken satay noodle bowl is loaded with veggies.
Molly Martin
What surprised us: The variety of flavors, textures and options. With Verrier's fine-dining background, his attention to quality and detail shouldn't be surprising. But "street food" seems to be as buzzy right now as "hot chicken," and often the flavors don't hit as hard as a menu description may lead you to believe.

Here they hit harder. Street Feud's approach is to be mindful of what the team is making from scratch. The bao buns, for example, are bought ready-to-use because Verrier can source a high-quality product. "Then I can concentrate on making something else better. I can make the sauces better. I can make the proteins better. All those kinds of things," he says.

Not only are the items packed with bold flavors, they also skew healthy, with plenty of options for different dietary preferences and allergies. The menu is broken down into several sections, including bowls, tacos, buns and fries, and each crosses the globe.

The fully loaded chicken satay bowl with peanut sauce, bean sprouts, cucumber, herbs, boiled egg and crispy shoestring potatoes is inspired by Indonesia, where Verrier's mother is from, for example, while the green papaya salad is Thai. Fries that are extra crispy thanks to a coating of potato starch can be topped Korean-style with pork belly and kimchi or with Indian flavors (braised lamb, curry aioli and cucumber raita). Even the kids' menu keeps things interesting with a PB&J bao bun option.

A liquor license is in the works, and booze will be part of the offerings soon. The large patio will continue to evolve, with more outdoor art planned. A walk-up window for late-night ordering may be added in the coming months, and Verrier says he's also considering hosting events in the parking lot, especially once summer arrives. He wants to use the space for some fine-dining pop-ups, too. "Maybe even get Goose in here to do some old Solera dishes," he suggests.

But ultimately, he just hopes the neighborhood embraces this new addition. "It all happens for a reason," Verrier says of ending up off East Colfax. "I'm stoked on our spot. Stoked about the way it looks and how it turned out. I don't think there's anything like it in Denver...and the food's tasting really good right now. Hopefully, it all adds up to a successful recipe."
KEEP WESTWORD FREE... Since we started Westword, it has been defined as the free, independent voice of Denver, and we'd like to keep it that way. With local media under siege, it's more important than ever for us to rally support behind funding our local journalism. You can help by participating in our "I Support" program, allowing us to keep offering readers access to our incisive coverage of local news, food and culture with no paywalls.
Make a one-time donation today for as little as $1.